It Happened on FEBRUARY 14

Death of Cyril, Apostle to the Slavs 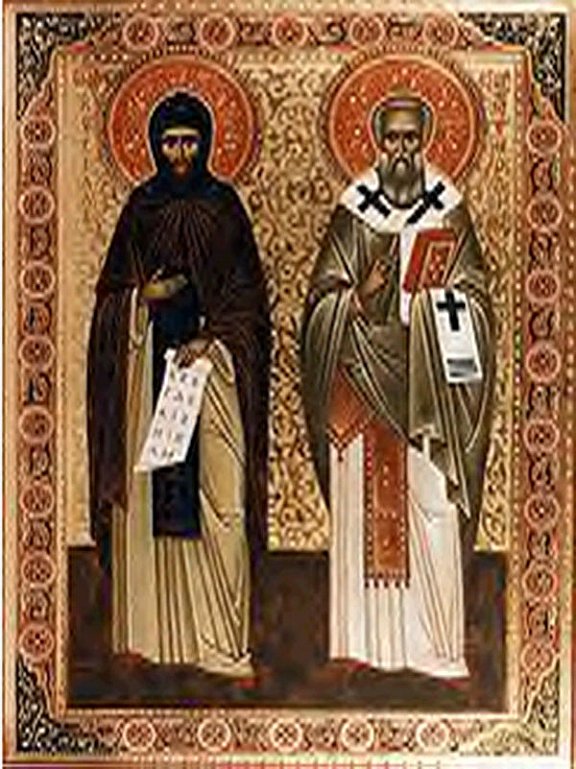 The brothers Cyril and Methodius, brought the gospel and writing innovations to the Balkans.

THE EVENT which ensured the fame of brothers Cyril and Methodius* was Prince Rastislav of Greater Moravia’s request.  He asked the Byzantine Emperor Michael to send his peoples a Bishop “able to explain to them the true Christian faith in their own language.”

Patriarch Photius delegated the noble-born brothers for the missionary task. Cyril and Methodius willingly accepted the commission and began work around 863, laboring under great privations for several years.

The brothers were ideal for the task. Born in the neighboring region of Thessalonica, they had a linguistic background that helped them learn the Moravian language and were already highly regarded for their faith and maturity. They had traveled with imperial embassies to the Balkans. Cyril was especially gifted for intellectual work, having taught as a professor at the University of Constantinople, where he gained the nickname “the Philosopher.”

The pair took with them essential scriptures which they translated into the Slavic language, modifying old Slavonic scripts into what became the Glagolitic script (later supplanted by the Cyrillic, used in modern Russia). Thus the Slavic church had a Christian liturgy in its own language almost from its beginning, an advantage to the understanding of its people. Though Christianity would later be virtually wiped out by Magyar invasions, the church literature survived and lived, transplanted to Bulgaria and Russia while also influencing the development of other local languages.

In 869 the brothers went to Rome to obtain ordination for some followers and receive the papal blessing for their liturgy, which was based on Byzantine forms. German Catholics had criticized the brothers, urging that the Slavs should use Roman-style worship. Pope Hadrian II did not agree, endorsing the brothers’ work. Cyril did not live long enough to enjoy this vindication, falling gravely ill while in Rome. He died on this day, 14 February 869 and was buried in the Basilica of St. Clement. Methodius, although the elder of the two, returned to work for another sixteen years.

The German bishops and princes were not pleased with Hadrian’s ruling because it undermined their influence in the region. When Methodius returned to Moravia, they seized him, tried him, and imprisoned him for three years. Only the intervention of Pope John VIII got him freed. He continued evangelizing and translating until his death in 885.

* Cyril and Methodius were adopted names. They had been named Constantine and Michael at birth.