It Happened on FEBRUARY 15 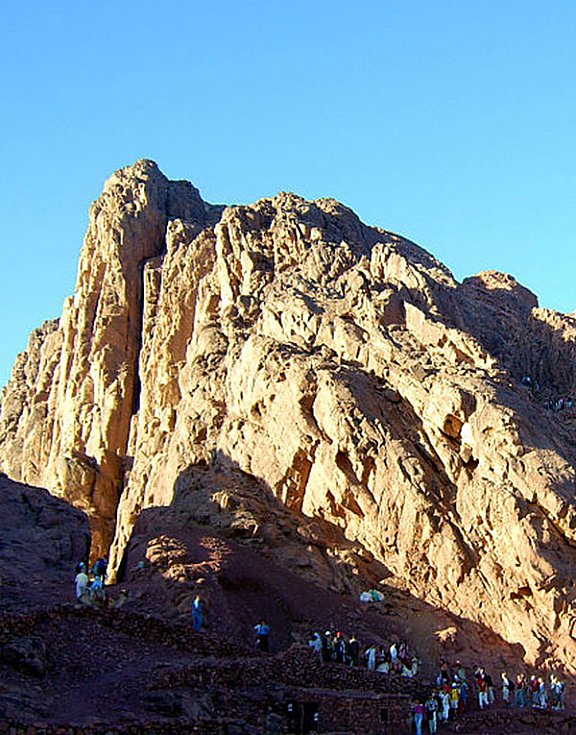 Mt. Sinai, one of the places Egeria visited in her pilgrimage.

FROM 384 THROUGH 387, Egeria, a Spanish nun, traveled throughout the Middle East, visiting the holy places of the Bible and keeping a detailed account of her journey for the benefit of her fellow nuns at home. The beginning and end of this travel diary was lost. The portion that has been preserved begins with her approaching the traditional site of Mount Sinai.

She had come from Egypt in an attempt to better understand the events recounted in the books of Moses and the later Biblical histories. “It was our special custom that, when we had arrived at those places which I had desired to visit, the appropriate passage from the book [i.e.: the Bible] should always be read.”

From Sinai she returned to Egypt and then proceeded along the coast road to Jerusalem. After examining the sacred sites in Jerusalem, she took an excursion to Mount Nebo where Moses died. Later she visited the Jordan where John baptized, continuing to the brook where the ravens fed Elijah, and ended at the alleged tomb of Job, supposedly revealed to a holy man in a vision. It seems the fourth century already had tourist traps.

After another stay in Jerusalem, she departed for Edessa where St. Thomas supposedly died, and passed on to Constantinople with a number of stops at other holy sites. Her travelogue breaks off with a planned visit to Ephesus, promising that “if God deigns to permit me this, or in anywise, if I have another project in mind, I will send you news of it in a letter.”

A portion of her record was devoted to descriptions of the ceremonies that took place in Jerusalem in honor of the seasons of Christ’s life. Epiphany, which celebrates the revelation of God in Christ, was then much more important than Christmas. Forty days after Epiphany the Presentation was celebrated. This honored the day when Jesus was presented in the temple, and was observed on this day, 15 February—“the Quadragesima of the birth of our Lord Jesus Christ.”

Egeria described the event in these words:

The fortieth day after the Epiphany is undoubtedly celebrated here with the very highest honor, for on that day there is a procession, in which all take part, in the Anastasis,* and all things are done in their order with the greatest joy, just as at Easter. All the priests, and after them the bishop, preach, always taking for their subject that part of the Gospel where Joseph and Mary brought the Lord into the Temple on the fortieth day, and Symeon and Anna the prophetess, the daughter of Phanuel, saw Him—treating of the words which they spake when they saw the Lord, and of that offering which His parents made. And when everything that is customary has been done in order, the sacrament is celebrated, and the dismissal takes place.

Everything that was “customary” included readings from the Psalms, Galatians, and Luke, interspersed with antiphons (short liturgical texts chanted or sung responsively preceding or following psalms) and alleluias.

*Anastasis: a rotunda at the Church of the Holy Sepulcher.