Issue 54 Eastern Orthodoxy: Then and Now 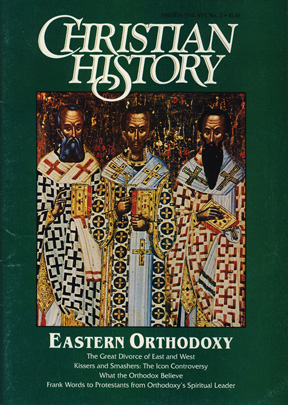 Eastern Orthodoxy: Did You Know?

From the Editor — Exotic Orthodoxy

Welcome to one of the most exotic journeys Christian History has taken.

For centuries Christians East and West lived as strangers to one another. Then Catholics violated the Orthodox.

An Orthodox archbishop on the Catholic pope.

Why two attempts at reunion were rejected by the Orthodox people.

Why the Orthodox killed one another over icons.

Chronology of the Eastern Orthodox church.

What the Orthodox Believe

Four key differences between the Orthodox and Protestants.

An Exercise in Wonder

Orthodox writers on the deep mysteries of the Christian faith.

The Counsels of Christ

A Taste of Glory

For the Orthodox, worship is heaven on earth.

We Do Not Wish to Blur the Faith

The spiritual head of Orthodoxy speaks some frank words to Protestants.

The strength of Orthodoxy, it turns out, is also its greatest temptation.