It Happened on FEBRUARY 13

Giles Randall Was Persecuted for His Christ-Centered Mysticism 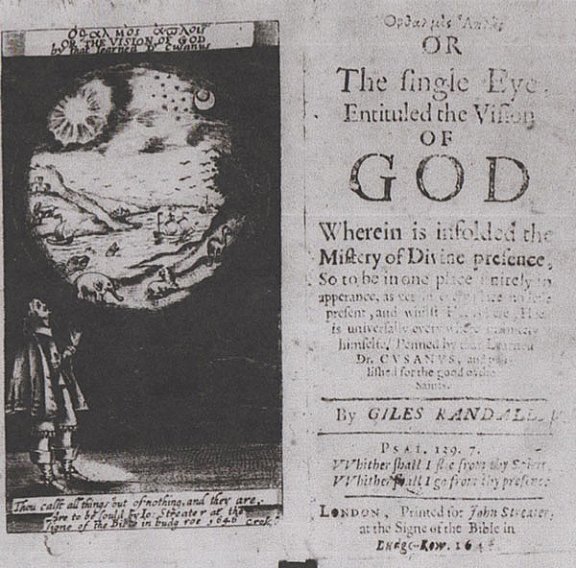 Randall's English-language version of a mystical work by Cusa.

SINCE THE BEGINNING of Christianity, every century has produced mystics—men and women who craved for a knowledge of Christ that went deeper than their contemporaries desired. They meditated, searched out obscure writings, and often braved the censure of established churches. One such was Giles Randall.

The son of Edward Randall of Chipping Wycombe, Buckinghamshire, in England, he studied at Oxford. Indeed, the only definite date we have in his life is this day, 13 February 1626 when he received his B.A. from Lincoln College, Oxford.

Afterward he became a popular preacher in London followed by great crowds. Little is known about him, except that either he, or another preacher by his name, protested “ship money” as an offense against God, because it made poor men pay what rich men should be responsible for. Ship-money was an old tax re-introduced by King Charles I in order to circumvent Parliament to raise funds.

In 1643, Randall was brought before the Star Chamber (an English court of law that sat at the royal Palace of Westminster) on charges of preaching Anabaptism, antinomianism, and familism. The charges were based on his message that baptism was for people old enough to understand what they were doing and that a Christian filled with the Spirit of Christ could lead a pure life, as well as the identification of his message with that of a sect of mystics known as the “Family of Love,” though there is no evidence he belonged to the group.

Whatever else his teaching was, it was Christ-centered, and he was capable of writing such beautiful passages as: “The sound and unerring knowledge of God standeth in your knowledge of your man Christ Jesus, and whoever hath seen Him hath seen the Father also, for He is not a dead image of Him, but a living Image of the invisible God, yea, the fulgor or brightness of His glory and character of His person.”

In 1646, Randall wrote the preface for an English translation of Nicholas of Cusa’s The Vision of God, an innovative and mystical book written two centuries earlier. That same year he also produced a translation of another mystical work by an English Capuchin friar, A Bright Starre, which purported to show how one might live with the life of God within. And two years later he wrote the preface to another mystic German work, translated into English, Theologia Germanica, “a Little Golden Manuall briefly discovering the mysteries, sublimity, perfection and simplicity of Christianity in Belief and Practice.”

[Jesus Revealed also focuses on the character of Christ.]

Rufus M. Jones, who gathered what could be found on the life of Randall, saw him as a precursor of Quaker thought. “A careful examination of all the material available convinces me that he was a high-minded, sincere, and fearless bearer of the message of the present, living, inwardly-experienced Christ, as Eternal Spirit, Divine Light, and Word of God.”