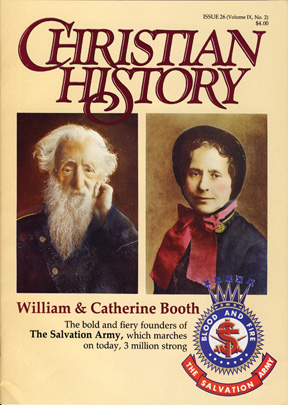 William and Catherine Booth: Did You Know?

Fascinating facts about the Booths and the Salvation Army.

From the Editor: Fashionable or Forceful?

William Booth was born in economic and spiritual poverty, yet he founded a worldwide organization dedicated to their eradication.

With her bright mind and powerful speaking abilities, Catherine Booth emerged as one of the most influential women in modern religious history.

Wise and witty words from the founder of the Salvation Army.

Wise and witty words from the co-founder of the Salvation Army.

Catherine Booth’s firm conviction that women should be free to preach the gospel forever shaped The Salvation Army’s openness to female officers.

The Army Under Siege

The Salvation Army: A Missionary Crusade

How a small, East London mission became one of the leading missionary organizations in the world.

“Darling, I have found my destiny!”

Three revivalists from across the Atlantic profoundly influenced the Booths’ theology and mission.

In His Own Words

Chronology of important events related to the Booths and the Salvation Army.

William and Catherine Booth: A Gallery of the Booths’ Children

Their struggles and achievements

The General’s view of sanctification, the kingdom of God, and salvation moved his Army to action.

What Do Salvationists Believe?

Eleven articles of faith of the Salvation Army.

The Story Behind Salvation Army Music

William Booth felt suspicious of organized music groups. Yet he launched a movement that became renowned worldwide for its bands and choirs.

Milestones during the life of William Booth.

In Darkest England and the Way Out

The history behind a Yuletide institution.

Life in the Army Today

Contemporary officers continue the mission of William and Catherine Booth.

The Booths, their children, and The Salvation Army have all received extensive study, so only a small portion of available works can be listed here.

Ancient Assistance Against the New Age.

The Reformer deeply influenced more than one institution.