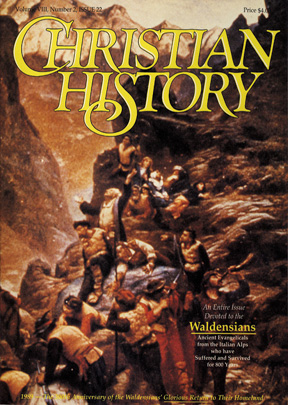 The Waldensians: From the Editor

The Waldensian motto: Into darkness, light.

Remembered by Their Enemies

Most of what we know about the early Waldensians comes from the reports of those who wanted to accuse and eliminate them.

A Prophet Without Honor

An Ancient and Undying Light

The Waldensians from the 12th Century to the Protestant Reformation.

The Donation of Constantine

For centuries the Donation was accepted by all, giving the popes great political clout.

The Pearl of Great Price

A Waldensian salesman would make allusion to more precious goods in his possession, to jewels of inestimable value

The Renaissance of the Gospel

A brief sketch of the Italian Reformation.

From the Reformation to the Glorious Return.

The Glorious Return of the Waldenses.

A Friend in the Lord Protector

Oliver Cromwell and the Effort to Save the Waldensians.

Waldensians and the Modern Era.

From Snow-Covered Peaks to Tropical Forests

Waldensians in Uruguay and Argentina.

To A Home in the Land of the Free

The Waldensians in North America.

From the Archives: Waldensian Legend Concerning the Donation of Constantine to Pope Sylvester (date unknown)

This early document tells in a remarkable and fanciful form the Waldensian story of how the Church had come to compromise with the world. Though The Poor were not around until the 12th century, mention is here made of their presence in the 4th century. They could, however, claim solidarity with ancient Christians who rejected worldly wealth and power.

This letter was sent from Lombardy to Lyons to express the outcome of an early meeting, which was held in Bergamo, Italy, between members of two separate Waldensian groups. Though the two groups differed in their approaches to the life of The Poor, the outcome of the meeting was a “new sense of unity.”

This is an excerpt from a written account of the heresy trial of Filippo Regis. Waldensians were routinely questioned about their knowledge of the elusive barba—the itinerant Waldensian spiritual leaders. Such accounts are often distorted: it is unlikely a barba would have taught to deny the virgin birth, or to deny that “the sons” could perform miracles.

From the Archives: La Nobla Leyczon (The Noble Lesson)

An excerpt from a letter of Waldensian pastor Giovan Paschale, who was hanged in Rome in 1560.

From the Archives: Subjects Discussed at the Meeting at Angrogna

Additional resources for those interested in learning more about the Waldenses.