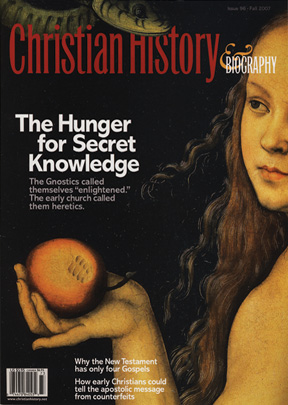 Why the lost gospels were really lost.

Gnostics: Did You Know?

Interesting and little-known facts about the Gnostics

It Only Takes a Spark (to keep a heresy going)

Ancient heresies are alive and well in modern culture

Gnosticism emerged during a time when Christians faced an identity crisis

The Secret is Out

Gnostic teachings about Christ in their own words

One God, One Christ, One Salvation

The label "Gnosticism" is a fuzzy one, describing diverse sects and ideas in the ancient world

Before creeds, even before an official New Testament, there was the Rule of Faith

A bird’s eye view of the early church, the emergence of the Gnostics, and the development of the biblical canon.

Tertullian, Novatian, and others

Despite the appearance of Gnostic "gospels," the early church decided that Matthew, Mark, Luke, and John were without rival

How we date gnostic and biblical manuscripts

Taught by the Apostles

What is the truth about Jesus? Ask those who knew his earliest followers, said Irenaeus

The Heresy that Wouldn’t Die

Though Gnostic sects faded in the early church, Gnostic ideas have had a long shelf life

Dig deeper into this issue's theme.