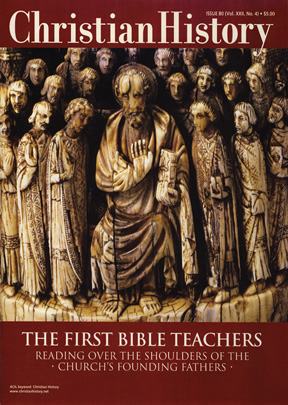 The First Bible Teachers: Did You Know?

Interesting and unusual facts about the church’s first Bible interpreters.

From The Editor — The Founding Fathers We Never Knew

Among the least-known figures of history are the early church fathers.

What we can learn from the church fathers that will enrich our own Bible study.

Why the Reformers Read the Fathers

The reformers wanted their teachings to be in harmony with the church fathers.

The First Battle For the Bible

A century after Christ’s death, a literalist and a spiritualizer forced the church to choose how it would read the Scriptures it inherited from the Jews.

Midwife of the Christian Bible

Irenaeus identified the books of the New Testament, then showed the church how they fit with the Old.

Too Racy for Bible Study

The scholars at Antioch rejected allegory in favor of history. But their interpretive method led some into heresy.

To achieve holiness, believed the early monks, you must soak in the moral sense of the Word.

Tracing a link from Egyptian monks, Nesteros, Origen, John Cassian, and the Benedictines.

Three Wise Men from the East

The Cappadocian Fathers brought the best gift of all: a powerful scriptural defense of the Trinity and Christ’s divinity against the Arian heretics.

The Church Fathers faced two big questions: “What is Scripture?” and “How should we read it?”

What the church fathers heard in Homer and Virgil tuned them to the harmonies of Scripture.

The West’s foremost theologian offered a single principle by which even the unlearned could unlock Scripture’s meaning.

Why he was so fond of spiritual Scripture interpretation.

Resources: Reading over the Fathers’ Shoulders

Here are several good guides to early exegesis, along with some of the best editions of the early interpreters’ own writings.