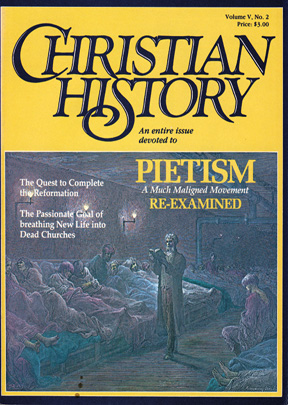 You’re Such a Pietist

Second phase of the Reformation?

From the Publisher: A Much Maligned Movement Re-Examined

Overview of this issue on Pietism.

Pietism: Did You Know?

Interesting facts about the Pietist movement.

Overwhelmed as with a Stream of Joy: An Autobiography

Autobiographical extracts from a Pietist who led the way in social action.

Can These Bones Live?

A spiritual hunger grew in reaction to the coldness and formalism of the Protestant state churches. Drawing from diverse roots, Pietism emerged as a quest to apply Reformation doctrine to personal life.

Who was who in the Pietist movement.

Reborn in Order to Renew

The Pietists’ emphasis on the new birth and biblical authority had startling implications as to how one treated orphans, the lower classes and one’s opponents. Orthodoxy was not enough. A changed life was required.

Christian History Chart: The Roots and Branches of Pietism

Moving on Many Fronts

Preaching, social concern, missions, ecumenicity were among the major emphases of Pietism.

The Flowering of Pietism in the Garden of America

Pietism provided the foundations for much of American religious structure.

These musical Pietists migrated to America where they did works of mercy, teaching, attending the sick, and evangelizing.

From the Archives: True Christianity

Johann Arndt’s work is recognized as the first great literary expression of Pietism. In his True Christianity he lays the foundation for biblical faith and how the believer must experience the power of faith in a vivid Christian lifestyle.

From the Archives: The Pia Desideria (Pious Desires)

The Manifesto of Pietism.

From the Archives: On Christian Perfection

To offset the decline in moral and spiritual values, Pietists sought to establish new standards of conduct and Christian discipline. Often these standards appeared to be perfectionistic and Pietists were criticized for this tendency. However, as this selection from A.H. Francke shows, Pietists also recognized human imperfections and thus strove for their ideals, fully aware that frailty and ignorance are a part of man’s struggle.

From the Archives: Hymns

From the Archives: Examining the Candidate

One of the immediate concerns of Henry M. Muhlenburg when he arrived in Pennsylvania in 1742 was the improvement of the quality of the clergy in the colonial Lutheran churches. To aid this process, Muhlenburg created a series of questions to examine candidates for the ordained ministry. While the author is concerned with loyalty to the historic Lutheran position, evidences are apparent of his “reverend fathers in Halle.”

From the Archives: Pietism and its Formidable Critics

Pietism has had its severe critics right from its beginnings and continuously through its history.

More material to help you research pietists and Pietism.