Issue 27 Persecution in the Early Church 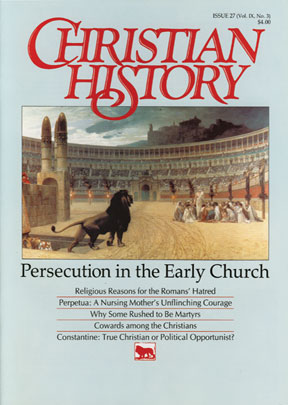 Persecution in the Early Church: Did You Know?

From the Editor: Tomb of the Unknown Christians

Each time you and I meet a Christian, we are viewing a monument to the unknown early Christian martyrs.

Persecution in the Early Church 2

Beginning as a despised, illicit religious sect, Christianity endured 300 years of hostility to emerge as the dominant force in the Roman Empire.

From the Archives: Nero’s Cruelties

The Piety of the Persecutors

In the Roman mind, there were valid religious reasons to halt the spread of Christianity.

From the Archives: Pliny’s Letter to Emperor Trajan

How should a governor treat people accused of being Christians?

The first-century Empire swirled with an exotic mix of religions.

Persecution in the Early Church: A Gallery of the Persecuting Emperors

The famous emperor ended the persecution of Christians. But was he a true believer, or merely a superstitious political opportunist?

From the Archives: The Edict of Milan

Selections from an agreement, made in 313, that changed the course of history.

The chi-rho symbol he adopted is now displayed in churches throughout the world.

Chronology of events in the history of early church persecution.

How the Early Church Viewed Martyrs

Christians held a theology of martyrdom that gave them courage to endure.

The Gallery: Martyrs and Confessors

Who was who among early church martyrs.

Cowards Among the Christians

Thousands of Christians crumbled under threat of persecution.

From the Archives: Cyprian’s Letter to Banished Christians

Encouragement for believers sentenced to the Roman mines.

Persecution remains with us.

Resources for further research on persecution of the early church.

The Faith Behind the Famous: Charles Dickens

Some of his novels mercilessly lampoon Christians. Yet the great Victorian author also wrote a reverent account of Jesus’ life.

Christian History Timeline: Events in the Life of Charles Dickens

Selected quotations from The Life of Our Lord.