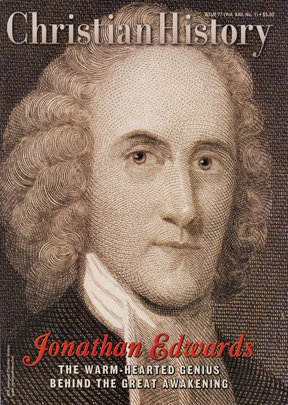 Jonathan Edwards: Did You Know?

One of the two top contenders for the title “Evangelical Patriarch” is Jonathan Edwards.

Edwards bestowed the riches of Puritanism on a world shaped by the Enlightenment.

A Mind on Fire

Throughtout his eventful life, America’s theologian was driven by a vision of the beauty in God’s sovereignty.

Pastor Edwards spared neither loving care nor the rod.

The Trouble with George

Edwards worried that the strong emotions raised by George Whitefield’s preaching would produce not steady Christians by religious hypocrites.

Edwards modeled himself as theologian, philosopher, and pastor after outstanding figures in each field.

Jonathan spent his life surrounded by beautiful women, and it showed.

The claimers and reclaimers of Jonathan Edwards.

The heart stirring revivalism of the Great Awakening led Edwards to develop a new religious psychology.

The Book of James

The famed William James drew on Edwards’s psychology but not his theology.

Edwards’s interest in religious psychology arose from his own almost mystical encounters with God.

When a pastor’s irresistible ideals met his congregation’s immovable status-consciousness.

Could a person be saved without knowing Christ? Among the Indians, Edwards began to wonder.

Edwards saw the exuberant goodness of the Creater in every detail of nature.

Edwards found the Christian life sweet and said so often.

Jonathan Edwards: Christian History Interview — On His Own Terms

Jonathan Edwards has much to say to us today, if we can get past his peculiar accent.

More resources by and about Jonathan Edwards.