Issue 72 How We Got Our History 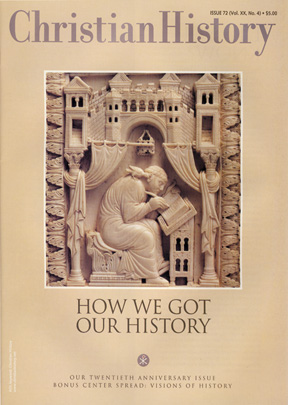 First-century rivals for the title Father of Church History.

The History of Recorded History: Did You Know?

Interesting facts about the history of recorded history.

History — Behind the Scenes: From the Editor

With history, as with rumors and recommendations, it’s crucial to consider the source.

The Problem of Eusebius

His work became the foundation for centuries of Christian scholarship. Was that foundation firm or hopelessly flawed?

What a Difference a Reign Makes

Eusebius traces the Christian saga: from abuse to esteem in less than a decade.

Those who believe that God rewards righteous nations have Orosius to admire and Augustine to dispute.

When God Came to England

How an English king and a Scottish bishop teamed up to spread the gospel.

Medieval chronicles showed Christians their place in God’s world, from Creation to the end.

Hagiography may not be factual biography, but it captures the practices and ideals of pre-modern Christianity perfectly.

Sometimes even hagiographers wondered if their stories were too good to be true.

The Best of History

Selected recommendations by our editorial advisors.

Renaissance scholarship proved fatal for one of the medieval papacy’s favorite claims.

Battle For the Past

A feisty English Protestant and a meek Dutch Anabaptist take their faith to the flames.

More notable names from the field’s recent past.