Issue 51 Heresy in the Early Church 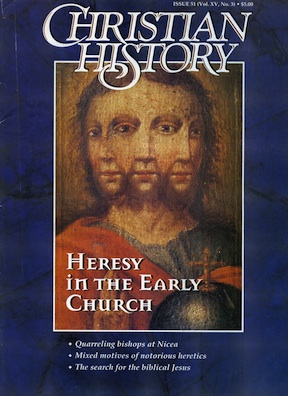 Heresy in the Early Church: Did You Know?

Remarkable or little-known facts about heresy in the early church.

From the Editor — How to Read This Issue

Not every heresy is covered in depth, and not every teaching is defined thoroughly—there just isn’t space.

A Hammer Struck at Heresy

What exactly happened at the famous Council of Nicea, when the Roman emperor convened some 250 quarreling Christian bishops?

The champion of orthodoxy on why the Word became flesh.

A quick summary of the competing schools of thought.

A lot of mistakes were made before the church figured out how best to describe Jesus Christ.

Key portions of the church’s most important theological statement.

How the earliest church decided Marcion and the Gnostics, among others, were wrong.

Why Bishops Should Be Trusted

When some early Christians said they had secret apostolic teaching, one church father said, “Not likely.”

Heresy in the Early Church: A Gallery of Malcontents for Christ

The mixed motives and odd teachings of four notorious heretics.

He created controversy when he tried to explain the gospel in terms his culture could grasp.

Chronology of events related to the early church and heresy.

In the Montanist controversy, did the church reject heresy or the Holy Spirit?

It wasn’t just what Christians believed but also how they lived that concerned early church teachers.

Heresy in the Early Church: Christian History Interview — The Search for the Biblical Jesus

The hard, technical, theological work on Christ was essentially a 400-year Bible study.

More resources for further information on heresy in the early church.