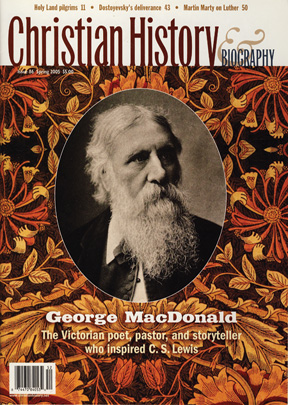 First church of Norway, Da Vinci’s fingerprint, and the cradle of Scottish Christianity.

A Pilgrim’s Tale: Journey to Jerusalem

The Jerusalem pilgrimage of Lethbald.

The Power of Books

For the Victorians, reading could be the doorway to doubt&emdashor to faith.

Life and Religion Are One

George MacDonald embraced all experiences, both joys and hardships, as vehicles of grace—and inspired others to do the same.

A Faith That Feels

Love at the Heart of the Universe

For George MacDonald, belief in God and obedience to God went hand in hand.

With the pen as his pulpit, George MacDonald used fiction to show the relevance of scriptural truth to the problems of his age.

George MacDonald’s legacy is his reminder that we are creative beings because we are made in the image of a Creator.

The Humiliation Of King Henry

The stakes of the Investiture Controversy, were too high for peace between Emperor and Church.

Luther called us to be born again daily.