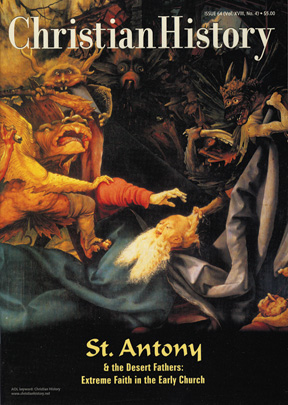 Antony and the Desert Fathers: Did You Know?

Spiritual Wisdom of the Desert Fathers.

Antony and the Desert Fathers: From the Editors — Models or Kooks?

The questions that hover in the background of this issue are as pressing as ever.

The Best There Ever Was

Modern Christian hermits still look to him for inspiration, as did the entire Middle Ages, but today we hardly know him. What did the illiterate recluse, known as Antony of the Desert, do to earn such adulation?

The Life Changing “Life of Antony”

Athanasius’s biography was not only a bestseller in its day, but a book that made people stop and thinkand act.

The stories of desert fathers’ skirmishes with demons pointed to a larger struggle—and victory.

Alone in the Desert?

Why thousands of early Christians took up the monastic way.

Diet For a Large Soul

What monks meant by fasting, and what they ate when they didn’t.

Chronology of events related to Anthony and the desert fathers.

The early monks not only prayed in the desert but sometimes rioted in the cities.

Jerome was a disciplined ascetic who was on top of current affairs.

Sabas just wanted to pray where Christ had lived and died but ended up establishing the most famous monastery in the Judean Desert.

Antony and the Desert Fathers: The Gallery — Getting Their Act Together

Monasticism was more or less a solitary affair until these four came along and taught monks how to live in community.

What many found when they sought God in a seemingly God-forsaken landscape.

Resources for more information on the desert fathers.