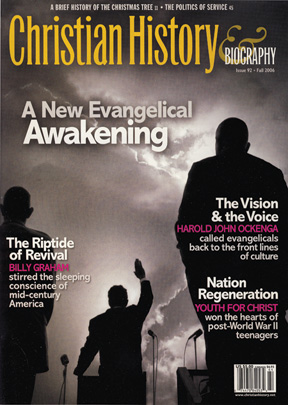 A brief history of the Christmas tree.

Who Were the "Fundamentalists"?

Many people associate this word with religious bigotry and close-mindedness. But in the early 20th century, fundamentalists were simply evangelicals determined to do battle for the faith.

Harold John Ockenga defines the vision of the movement

The Young and the Zealous

How do you change the course of the nation's future? Youth for Christ had the answer: Win over the next generation.

The Riptide of Revival

The New Evangelicals called for a fresh application of Christian truth to the social problems of the day.

One in the Spirit?

Evangelicals are still searching for the elusive ideal of unity.

The Politics of Service