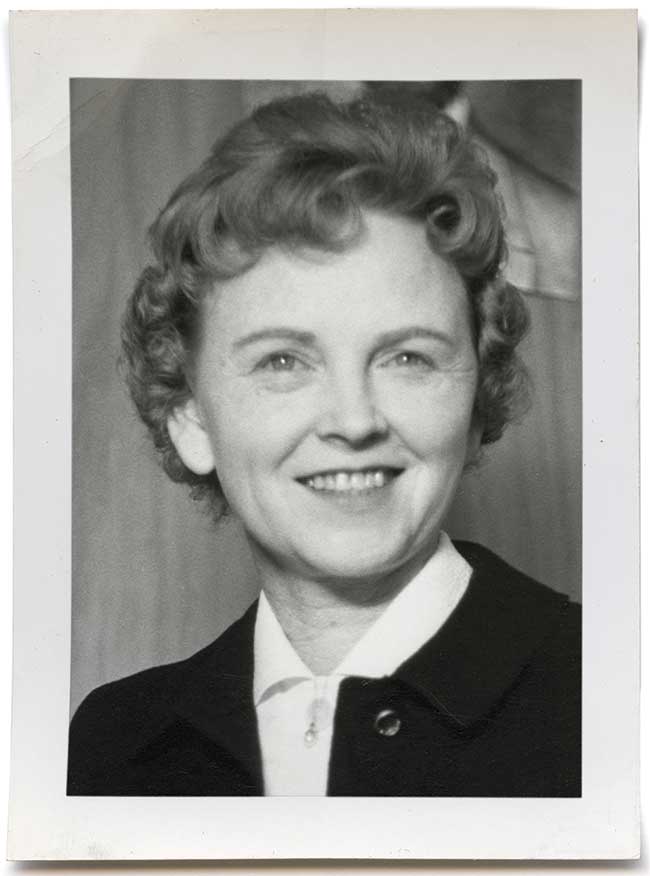 Nellie Logan was a schoolteacher who only traveled outside of her home city of Baltimore, Maryland, on a few short trips. Though she did not travel far, her influence was far-reaching through her spiritual impact on the life and ministry of E. Stanley Jones.

Miss Nellie, as Jones called her, was one of Jones’s first teachers, and they shared their lives through letters during her lifetime. When Jones’s mother passed away, Logan even became his stand-in mother:

When my mother was dying she called Miss Nellie and said to her: “These years I have prayed for Stanley. Now I am going. I’m turning him over to you, for you will take up my vigil of prayer for him.” Miss Nellie said to me years later: “I’ve been true to the entrustment.” . . . She was “true” as a friend, a counselor, a Christian—everything that a noble woman could be.

Though Jones gave much credit to Logan for his faith and ministry, she, too, was grateful for Jones. She wrote,

The one desire of my life has always been to travel and see the world. . . . I have no regrets for I have tried to keep solemn promises made with the full consent of my will. However I have traveled thro’ books, lectures, and letters from my friends who were more fortunate than I. . . . I am grateful to my Heavenly Father for giving me imagination!

A woman and a man, a teacher and a pupil, a homebody and a famous world influencer, Logan and Jones’s spiritual friendship bridged gender, age, vocation, and culture.

Sherwood Eddy was born in Kansas to a prosperous family, becoming a Christian in 1889. He worked in both the Student Volunteer Movement and the YMCA to “evangelize the world in this generation.” When his father passed away in 1894, Eddy’s inheritance made him financially independent and allowed him to concern himself only with sharing the gospel throughout the world.

Beginning in 1896 Eddy spent 15 years in India working among the poor and serving as a traveling evangelist. Then he dedicated 15 more years to doing evangelistic work across Asia. Early in his 35 years of volunteering with the YMCA, Eddy realized that his argumentative approach to evangelism failed to win hearts. Understanding that “we were not sent to win debates but to win people,” Eddy took two years to become fluent in Tamil and came to believe that missionaries had to see locals as equals. He also was an early proponent of the idea that locals, and not foreign missionaries, should be leaders in the church.

Eddy and E. Stanley Jones worked closely together in India, and they also traveled and worked together in China in the 1920s. Both believed that divisiveness within the church hurt evangelistic efforts. Eddy wrote, “I can find no difference between liberals and conservatives in the consecration or in the spiritual results of their work.” Both saw agreement in doctrine as important but not essential; for Eddy and Jones, the most critical aspect of their ministry was to live a life connected to Christ and guided by love and Christian ethics.

Ralph Diffendorfer was an Ohio-born executive of the Board of Foreign Missions of the Methodist Episcopal Church. As a child he was mesmerized by the life of British missionary David Livingstone, and Livingstone’s story prompted Diffendorfer to dedicate his life’s work to promote worldwide missions.

A bishop in the church said of Diffendorfer, “He’s got more ideas than any other fellow I ever knew, and most of them aren’t of any account. But once in a while he gets a hold of one of them that we accept, and it is worth more than any of the others.”

E. Stanley Jones recalled in his 1961 devotional, In Christ, that when he prayed about where he should be a missionary, “The Inner Voice replied, ‘It’s India.’ I arose from my knees and repeated those words to myself, ‘It’s India.’ It was settled.” Then Jones wrote, “If I was called to be a missionary, I was pushed into being an author—it was a very gentle push, but a push nevertheless. Dr. Diffendorfer, secretary of the mission board, said to me, ‘Why don’t you write down what you have been saying to the American people?’” Jones heeded Diffendorfer’s advice and wrote his first of 30 books, The Christ of the Indian Road.

Diffendorfer encouraged Jones to write his seminal book to share his learnings with missionaries and mission organizations: that missionaries must respect local cultures and contextualize Christianity within them instead of mindlessly imposing their own culture upon people groups. Jones believed from that starting point that the Holy Spirit and the gospel of Christ are powerful enough to do the rest.

Born in Kobe, Japan, Toyohiko Kagawa was orphaned as a young boy and sent away to a school run by missionaries. He converted to Christianity and studied at Kobe Theological Seminary and later at Princeton Theological Seminary, where he became friends with E. Stanley Jones.

Less interested in doctrine alone than in how Christianity in action affects doctrine, Kagawa was active in helping the poor, promoting women’s suffrage, and advancing peaceful foreign policy.

A well-known theologian and peace advocate, Kagawa traveled around the United States in 1941 speaking and meeting with foreign dignitaries concerning Japan’s relationship with China. From July 1 to 5, Kagawa and Jones met at a YMCA camp in Lake Geneva, Wisconsin. Jones recalled one morning when they “went to the lakeside to wait on God, to see if we could see any light on the tremendous question as to whether China and Japan could be reconciled.” Kagawa suggested to Jones that if Japan were granted New Guinea, perhaps Japan would withdraw troops from China.

On September 17, 1941, Jones met with officials in Washington, DC, to propose Kagawa’s suggestion of offering New Guinea to Japan. Although the plan was officially proposed to Secretary of State Cordell Hull in November, it went no further. Jones continued to urge peace, but Japanese air strikes reached Hawaii on December 7 (see p. 10).

Following the end of World War II and Japan’s surrender, Kagawa helped advise the transitional Japanese government and worked to create democracy in Japan. He wrote more than 150 books and was nominated for the Nobel Prize in Literature in 1947 and 1948 and for the Nobel Peace Prize in 1954 and 1955.

Born the fourteenth child of a Dalit (untouchable) family, Bhimrao Ambedkar was the only one of his siblings to pass his examinations to go to high school. After graduating from Bombay University with a degree in economics and political science, Ambedkar received his PhD from Columbia University and further postgraduate degrees from the London School of Economics.

After practicing law in India, Ambedkar created the Independent Labour Party and published the book Annihilation of Caste in 1936. He criticized Hindu orthodox leaders, including Gandhi, for promoting the caste system in India. After India’s independence in 1947, Ambedkar wrote India’s new constitution and helped reform India’s economic system by advocating for industrialization and agricultural growth.

Together Ambedkar and E. Stanley Jones met with Gandhi during his imprisonment in Yerewada Jail during the fight for Indian independence. Ambedkar advocated for the eradication of the caste system, but Gandhi refused to support his position, asserting that caste was only a social distinction (rather than a deeply embedded hierarchical way of life). Knowing that moral, social, and educational equality were necessary for Dalit freedom, Ambedkar wrote, “There can be no uplift of the untouchables without annihilation of caste.”

Recognizing how Hinduism’s caste system had disillusioned Ambedkar, Jones attempted to convert Ambedkar to Christianity. However, Ambedkar was disappointed by the caste system he saw within the Indian church and the fact that Christianity had failed to help wipe it out.

E. Stanley Jones believed that one way to advance the gospel in India was to create ashrams that were both wholly Indian and wholly Christian. There Indian Christians and missionaries could study the gospel, discuss India’s national issues, and apply Christ’s teachings to life. Jones founded the Lucknow Ashram and appointed J. Holmes Smith to the helm.

While Jones traveled widely throughout India—using the ashram only as a home base—Smith led the ashram down a more political path in support of the Kristagraha movement, the Christian Gandhian nationalist freedom effort. Due to Smith’s active support of Indian independence from Britain, the British government expelled Smith from India in 1940.

Once repatriated to the United States, Smith cofounded New York City’s Harlem Ashram, which promoted Gandhian nonviolent protests and welcomed visits by pre-civil-rights leaders. The ashram was located in an African American and Puerto Rican neighborhood and became a center of Christian peace activities. Smith and other ashram leaders attempted to confront racism through Gandhi’s practice of ahimsa, or action without violence.

Although the ashram shuttered its doors in 1948, it helped model nonviolent sit-ins and marches that would become trademarks of the American civil rights era. Smith wrote at least one known hymn, “Come forth, ye men of every race and nation,” which urges listeners to join in fighting for the dispossessed and concludes:

Though ruthless power may wield its weapons gory

We hold ourselves for Thee all loyalties above.

Though storms of hate may rage in empty glory

In the splendour of the Dawn we see Thy cross of love.

Though Jones concentrated less on politics and more on evangelizing in his Indian ministry, he continued to support and advise Smith’s efforts at the Harlem Ashram. Both men desired to bring the Kingdom of God to earth as they worked for racial reconciliation, justice, and peace.

Mary MacPherson was born in Peoria, Illinois. Less than a year after her birth, her mother died in the sinking of an excursion steamboat on the Illinois River; her father worked frequently on the railroad, so she grew up in the home of relatives.

In 1950 she converted under the preaching of Jones, who was evangelizing in the United States and came to speak at her Peoria church; two weeks later her husband, Roy Webster, whom she had married in 1945, also converted. A few months later, she began attending Jones’s ashrams.

The next year Roy was killed in a car accident, in which Mary, their two sons, and Roy’s sister May were badly injured. May continued to live with Mary who cared for her despite May’s severe injuries.

Webster began to work with Jones in the ashrams in North America in the 1950s. She traveled as a lay evangelist on her own and with Jones and others; he felt that the future of the church would be powerful in the laity’s hands. She also helped transcribe The Divine Yes, which was published after his death.

“We do not work to the victory, but from the Victory,” Webster once said. In her life she tried to live out that message. CH