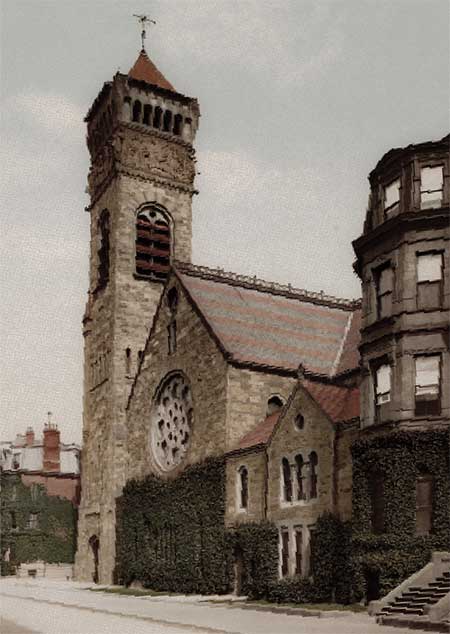 The oldest Baptist church in Boston.

In England Baptists were divided into General (Arminian) and Particular (Calvinist) Baptists, differing over whether Christ died for all (Arminianism) or only for the elect (Calvinism). These developed in the colonies into three groups:

Regular Baptists were Calvinist and more formal in their worship, favored a paid and educated male clergy, and opposed the emotionalism of the First Great Awakening of the eighteenth century. By the nineteenth century, they had merged with Separate Baptists.

Free Will Baptists were Arminian; as Regulars and Separates joined together and their Calvinism softened, most Free Will churches were absorbed into those associations and conventions. A few still exist, marked by conservative theology and the practice of foot washing.

In America new groups emerged in the nineteenth century. Primitive Baptists were motivated by a desire to follow the faith and order of the New Testament. They became known for strict Calvinism, the rejection of organizing impulses, the practice of foot washing, and acappella singing.

Landmark Baptists held that Jesus had established a Baptist church and that only Baptist churches had an unbroken succession back to the New Testament. Landmarkers stressed the absolute primacy of the local church, practiced closed Communion, and rejected “alien immersion” (baptism by a non-Baptist). Their influence in Southern Baptist life can still be felt.

The most basic Baptist unit is the local church. But organizations have risen at a higher level. The Triennial Baptist Convention was established in 1814 to support Baptist foreign missions. It soon united Baptist associations, societies, and eventually educational and publishing efforts. It attempted neutrality over slavery, but when its Home Mission Society refused to appoint a slave owner as a missionary, the Southern Baptist Convention formed in 1845. In 1907 Baptists in the North decided to create a more centralized structure and formed the Northern Baptist Convention (now American Baptist Churches in the USA).

American Baptists have tended to be more liberal in their doctrine, liturgical in their worship, and ecumenical in their practice. Southern Baptists are generally theologically conservative, nonliturgical, and evangelical in outlook. With roughly 16 million members, the Southern Baptist Convention (SBC) is the largest Protestant denomination in the United States.

Fundamentalist movements resulted in numerous splits among white Baptists over the first half of the twentieth century. In 1979 the SBC underwent significant upheaval; after conservatives came into power, progressives formed the Alliance of Baptists in 1986 and moderates formed the Cooperative Baptist Fellowship in 1997.

Most black Baptists originally worshiped in churches controlled by white Baptists. But after the Civil War, they increasingly established their own congregations, associations, and mission societies. In 1895 three black conventions merged into the National Baptist Convention. In 1915 National Baptists split over ownership of the publishing house; fragmentation continued in 1961, resulting in the activist Progressive National Baptist Convention. At roughly 15 million, black Baptists account for at least 25 percent of America’s Baptists, making them hugely significant to the Baptist story.

Elizabeth Flowers, associate professor of religion at Texas Christian University and author of Into the Pulpit: Southern Baptist Women and Power since World War II.

The Baptist battle for religious liberty