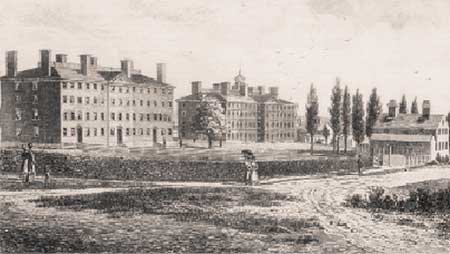 Observers view Baptist colleges and seminaries of today with curiosity. Like little engines that could, they plod along amid the challenges of a culture that increasingly spurns what they have to offer: education based on religious conviction.

For Baptists this scorn is nothing new; they have always trained those whom other colleges would not accept. Beginning in 1764 Baptists started over 500 institutions of higher learning; some confessionally Baptist but open to all, others specifically focused on Baptist church leadership or missionary service.

the road to Brown

Schools to educate believers were nothing new in colonial America. Beginning with Harvard in 1636—then William and Mary (1693), Yale (1701), the University of Pennsylvania (1740), Princeton (1746), and Columbia (1754)—Anglicans, Congregationalists, and Presbyterians had founded colleges to provide both liberal arts training and religious education.

The trouble was that Baptists were not particularly welcome in these established institutions. Despite other colonists having escaped religious persecution themselves, they had little tolerance for Baptists. So Baptists forged their own path. They began in the place that, thanks to Roger Williams a century before, had become a Baptist haven—Rhode Island. Williams had seen the necessity of education from the beginning, writing in his Bloudy Tenent of Persecution (1644) that one of the roles of a godly magistrate was to “provide for the churches as to erect schools, take care for fit governors and tutors.”

Rhode Island College (now Brown University) in Providence, founded in 1764, was the first Baptist educational institution in America. The student body did not always comprise a Baptist majority; the founders, committed to religious liberty, envisioned a college with classical ideals where Baptists and others could attend. Similar institutions followed: Colgate University in New York, Georgetown College in Kentucky, the University of Richmond in Virginia, and Wake Forest University in North Carolina. Their goal was to prepare students for all of life within a broadly religious context.

But theological education was also significant. When Baptists came to America, many were active from the beginning in sending out itinerant preachers to plant churches in frontier areas. But most of these preachers were uneducated. Historian Janet Phillips once noted that the reputation of Baptists for “being an ignorant lot led by unlearned ministers made [Baptists] squirm.”

Educational societies sprang up to support those called to the ministry; ministry training schools and seminaries arose throughout the country; and collections were taken to aid students. The Northern Baptist Education Society began handing out scholarships in 1791. Its constitution began:

The exclusive object of this Society shall be to aid, in acquiring a suitable education, such indigent, pious young men of the Baptist denomination as shall give satisfactory evidence . . . that they are called of God to the gospel ministry.

Birthed amid conflict, Southern Baptists experienced continued controversy; as a result new institutions arose. Luther Rice Seminary and Mid-America Seminary created places for theological conservatives who were concerned about moderate or liberal teachings. Education was at the core of the dispute; president of the SBC Morris Chapman (b. 1940) later commented,

Scores of God-called young people who had been birthed, baptized, and discipled in Bible-believing Southern Baptist churches went off to Baptist institutions of higher learning where they were robbed of their faith in the truthfulness of Scripture by the very folk . . . paid by Baptists to strengthen their faith and prepare them for vital ministry.

When the churches of the SBC led their institutions back to theological conservatism, this led new schools to emerge such as Baptist Theological Seminary of Richmond, Campbell University Divinity School, and Wake Forest University School of Divinity.

Baptists were also committed to providing education for individuals outside of the white male elite. Like other American women, Baptist women did not attend seminaries, or even many universities. But in 1838 Judson College opened in Marion, Alabama, founded by Siloam Baptist Church members and named after missionary heroine Ann Judson. Founder Julia Tarrant Barron (1805–1890) enrolled her son John along with the first class of eight young women, but when she thought he had become too old for co-educational classes, the undaunted Barron founded Howard College for men so John would have a school to attend!

These schools were doing something revolutionary by giving many women access to formal education for the first time. The Women’s Missionary Union Training School, founded in 1907 at the Broadway Baptist Church in Louisville, trained potential missionary women in a three-year course that included not only Christian education and home economics but also theology, comparative religion, church history, and the Bible. In addition they could take electives alongside men at SBTS.

Many Baptists after the Civil War sought to educate African Americans. At the same time, many existing Baptist schools did not admit black students. Institutes began to spring up, many in church basements: Morehouse College in 1867 in Springfield Baptist Church in Augusta, Georgia; Virginia Union University in the 1860s in Ebenezer Baptist Church in Richmond, Virginia; and Spelman College, the nation’s oldest college for African American women, in Friendship Baptist Church in Atlanta. After Brown v. Board of Education in 1954, Baptists ultimately opened all of their doors, but the historically black schools had developed a rich history.

The development of schools has not stopped, from universities to trade schools to Bible colleges. From a founding member of the Ivy League in 1764 to twenty-first-century worldwide online learning, hundreds of thousands of students have received an education from what began as a group of dissenters who saw the value of learning and sought to provide it. CH

Amy Whitfield is director of Marketing and Communication at Southeastern Baptist Theological Seminary.