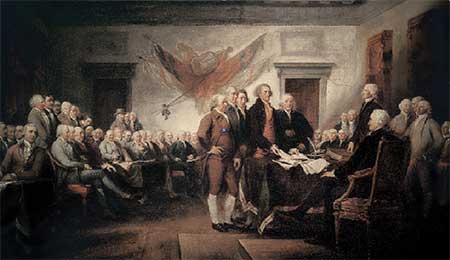 Presenting the Declaration of Independence.

On January 1, 1802, President Thomas Jefferson wrote to the Baptist Association of Danbury, Connecticut. For more than a year, it had been actively petitioning against laws that privileged the state faith: Congregationalism. The association appealed to the president for support, calling religion “at all times and places a Matter between God and Individuals” and stating that no one should “suffer in Name, person or effects on account of his religious Opinions.”

Even though the Bill of Rights had been in effect for a decade, the First Amendment’s prohibition of religious establishment was understood to apply only to the federal government. In fact Congregationalists in New England had a standing order for civil authorities to punish “idolatry, blasphemy, heresy, venting corrupt and pernicious opinions.” The Dissenters’ Petition, as it became known, asked the state legislature to abolish all regulations that interfered with “the natural rights of freemen” or “the sacred rights of conscience.”

Actions but not opinions

Baptists deeply objected to paying taxes to support Congregational churches. They reminded the president that the few religious privileges they enjoyed were regarded as “favors granted” by the state government, not as “inalienable rights.” In his response Jefferson agreed “that religion is a matter which lies solely between man & his god, that he owes account to none other for his faith or his worship, that the legitimate powers of government reach actions only and not opinions.” It was a familiar argument he had made earlier in his Virginia Statute of Religious Freedom. To the Baptists Jefferson went on to reference the First Amendment on freedom of religion—which, he explained, built “a wall of separation between Church & State.”

The appeal to Jefferson seemed to have had no immediate impact on the petition, which was met with overwhelming opposition in Connecticut’s General Assembly. Governor Oliver Ellsworth reportedly threw it on the floor and stomped on it, saying, “This is where it belongs.” But in 1818 Connecticut would narrowly adopt a new constitution affirming “that the exercise and enjoyment of religious profession and worship, without discrimination, shall forever be free to all persons in this State.”

The crown of Jesus

The Baptist position came out of a long tradition of English religious dissent. The term “dissenter” in the English context includes a theologically wide range of groups from Presbyterians to Quakers, with Baptists and Independents in the middle; they shared a common bond as minorities first persecuted and later tolerated by the dominant, established Anglican majority.

The first generation of English Baptists were strong defenders of religious liberty. Leonard Busher‘s Religion’s Peace (1614) addressed to King James I a full-throated plea for complete and free liberty of conscience for all: “Christ hath not commanded any king, bishop, or minister to persecute the people for difference of judgment in matters of religion.” Thomas Helwys and John Murton also defended freedom of conscience in tracts like A Humble Supplication to the King’s Majesty Against Persecution of Any of the King’s Subjects for Differences in Religion (1620).

In 1661 John Sturgion published a tract addressed to King Charles II in which he made an impassioned plea for toleration on behalf of “the Baptized People” (the Baptists) “that we may serve the Lord without molestation in that Faith and Order which we have Learned in the Holy Scriptures.” And Thomas Monck and six other Baptists issued a petition entitled Sions [Zion’s] Groans for her Distressed, which asserted that, because God made the conscience free, “no Magistrate, although a Christian, hath power to be a Lord over another’s faith.”

Some dissenters left England in search of freedom of worship, and, of course, some wound up in the American colonies. Roger Williams (1603–1683) arrived in Boston in 1631; he was banished four years later by the General Court of Massachusetts for his “new and dangerous opinions.” Boston minister and fellow dissenter John Cotton defended the banishment; Williams responded that compelling the conscience amounts to “soul-rape,” declaring that any faith “which needs such instruments of violence to uphold it” cannot be true.

Williams and a small band of followers set out to establish a colony as “a shelter for persons distressed of conscience” and obtained a Royal Charter for Rhode Island and Providence Plantation in 1636; it ensured religious liberty for all its residents. In his most famous book, The Bloudy Tenent of Persecution (1644), Williams drew on the Baptist tradition of dissent, especially a letter by Murton which he quoted extensively. Williams argued that the soul is free, not because the human will is supreme, but because Jesus Christ is king:

God’s people since the comming of the King of Israel, the Lord Jesus, have openly and constantly profest, that no Civill magistrate, no King nor Caesar have any power over the Soules or Consciences of their Subjects, in the matters of God and the Crowne of Jesus.

In 1643 a letter to Williams by John Cotton mysteriously appeared in print, denying that it was necessary to repent for maintaining communion with the Church of England. But Williams in reply contended that joining together with the unregenerate is akin to false worship which, as he famously intoned, “stincks in God’s nostrils.” He proposed that there must be a “wall of Separation between the Garden of the Church and the Wildernes of the world.” Initially he thought this could be achieved by weeding the garden, but his hopes of a pure church faded.

Williams invoked the metaphor of “the wall of separation” long before Jefferson. Yet for Williams this wall protected the church from the world, not the state from the church. He lamented that God had caused the wall to be broken down, and the worldly vines had choked out the garden. The only hope was to await the coming of Christ, the heavenly gardener, who would prune back the weeds, so that the roses might again bloom.

Other colonies held the Rhode Island experiment in contempt, and Williams was essentially forgotten, even among fellow Baptists. But in the late eighteenth century, Isaac Backus (1724–1806) and Baptists in Massachusetts retrieved his memory and example to support their cause of religious disestablishment.

In History of the Baptists in New England (1777), Backus extolled Williams’s Rhode Island as “the best form of civil government that the world had seen in sixteen hundred years.” Yet when Backus had earlier drafted a petition to the Massachusetts General Court arguing that every person has a God-given “unalienable right” to act according to conscience, he did not extend this protection to Catholics (unlike in his Rhode Island model).

a change in the solar system

The greatest contribution of Backus to church-state relations came through his leadership of the Grievance Committee of the Warren Association, which repeatedly petitioned the Massachusetts General Assembly. In 1774 it even submitted a memorial to the Continental Congress; John Adams dismissed it, suggesting it would be more likely to expect a change in the solar system than to expect Massachusetts to give up its established church. (But give it up Massachusetts ultimately did, in 1833.)

Backus was not the only prominent Baptist advocating freedom of conscience. If one asks historians who built the wall of separation of church and state in America, their answer is usually “James Madison,” but if the question had been put to Madison (1751–1836), he might well have replied “John Leland and the Baptists.”

In colonial Virginia it was not uncommon for Baptists and other religious dissenters to be fined, beaten, or imprisoned. Between 1770 and 1775, the Baptists presented a succession of petitions against this in the General Assembly of Virginia; the undisputed leader of this battle for the disestablishment of the Episcopal Church in Virginia, which finally occurred in 1776, was John Leland (1754–1841).

Yet for Leland true liberty was more than toleration. To secure it he met in 1788 with Madison, a delegate to Virginia’s ratifying convention for the Constitution, and protested that the Constitution had no provision for religious liberty. Madison, who was also running for Congress, reminded Leland of his efforts to secure religious liberty in the Virginia Legislature and assured him he would do the same if elected to Congress. Leland and the Baptists agreed to support Madison, who was elected by a large margin. Virginia ratified the Constitution in 1788; Madison went on to write the Bill of Rights, approved in 1791, making good on his promise.

In 1802, when Jefferson wrote the Danbury Baptists, he originally also wanted to explain why he did not proclaim fasts and thanksgiving days like his predecessors. After consulting with his cabinet, Jefferson deleted his explanation and also struck out the word “eternal” in his sentence that the First Amendment built “a wall of eternal separation between Church & State.”

Given that the closing of the Danbury Association letter prayed that Jefferson would be brought safely to the Heavenly Kingdom through Jesus Christ, perhaps the president and his advisors realized that not even Baptists believed that the separation of church and state would continue throughout eternity. CH

Curtis W. Freeman is research professor of theology and Baptist studies and director of the Baptist House of Studies at Duke Divinity School, an ordained Baptist minister, and the author of Undomesticated Dissent; A Company of Preachers; and Baptist Roots.