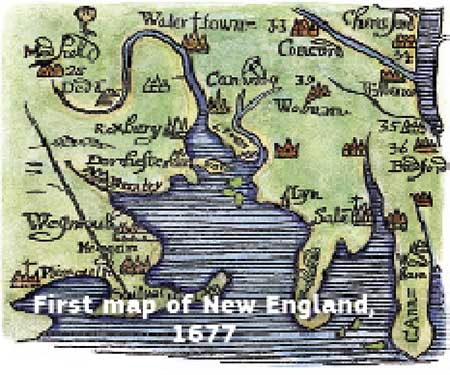 — 1609 Former Anglican John Smyth rebaptizes himself and 40 others by pouring in Amsterdam.

— 1654 Henry Dunster, first president of Harvard, is forced to resign because of his Baptist views.

— 1661–1664 British parliament passes acts that exclude and penalize Baptists and other Nonconformists.

— 1682 First Baptist Church is formed in Kittery, Maine, then moves to South Carolina, becoming the first Baptist church in the South.

— 1727 Free Will Baptists are founded in North Carolina.

— 1755 PBA organizes a home missions program, alarming Baptists who fear too much organization.

— 1764 Baptists found the school later called Brown University, only the seventh institution of higher education founded in the colonies.

— 1773 Isaac Backus publishes An Appeal to the Public for Religious Liberty.

— 1780 Another line of Free Will Baptists is organized in New Hampshire.

— 1812 Adoniram and Ann Judson and Luther Rice leave for India as Congregationalists but become convinced of Baptist doctrine.

— 1814 Triennial Convention is formed in Philadelphia.

— 1844 In the “Millerites’ Great Disappointment,” the world does not end on October 22.

— 1846 Free Will Baptists license Ruby Knapp Bixby as the first licensed female Baptist preacher in the US.

— 1851 Landmarker Movement arises, arguing that Baptists trace back to the New Testament.

— 1900 Nannie Helen Burroughs delivers speech “How the Sisters Are Hindered from Helping.”

— 1909 Burroughs founds the National Training School for Women and Girls in Washington, DC.

— 1916 The NBCU splits over issues related to the Publishing Board.

— 1923 William Bell Riley, “The Grand Old Man of Fundamentalism,” sets up the Anti-Evolution League of Minnesota and the Baptist Bible Union.

— 1939 SBC, NBC, and NBCU jointly sign the American Baptist Bill of Rights as a statement of religious liberty.

— 1976 Jimmy Carter is elected president after referring to himself as “born-again” while campaigning.

— 1979 At the SBC’s annual convention, conservatives are elected to key positions.

— 1987 Alliance of Baptists is formed by SBC liberals.

By Association of Religion Data Archives, the Baptist History and Heritage Society, and other sources

Baptists wrestle with fundamentalism and liberalism