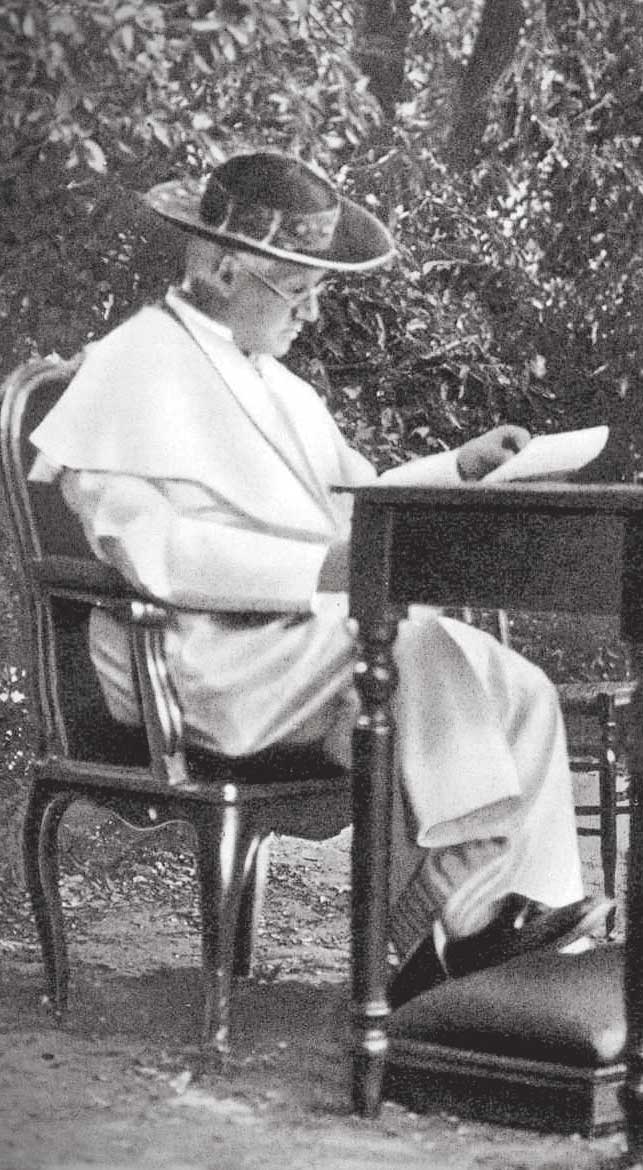 Why did a new desire to imitate church fathers and mothers arise in the 20th c.? See p. 9;

What does the trauma of the year 1968 in US history have to do with a theological turn toward the past? See p. 12;

How did Pius X (pictured above working in the Vatican gardens) try to deal with the modern age? See page 28;

Who was John Williamson Nevin and how did he foreshadow modern debates? See p. 37.

The rest of Augustine’s story

Many of us think we know all about the famous “garden conversion” of Augustine of Hippo (354–430). But do we? On that day an African officer named Pontician visited Augustine’s villa and began idly to flip through a copy of Paul’s epistles. It prompted him to praise the monastic life pioneered by Antony the Great (251–356)—which Antony had explicitly initiated to capture the spirit of the martyrs. Pontician told Augustine that two of his fellow soldiers had decided to join a monastery after reading Athanasius’s Life of Antony, and so had their fiancées.

After Pontician left Augustine turned to his friend Alypius and said, “What is the matter with us? The unlearned rise and take heaven by force, and here we are with all our learning—see how we wallow in flesh and blood? Are we ashamed to follow because others have gone before?”

He stormed into another part of the garden, where he famously heard a voice chanting “Take and read” and picked up his copy of Paul’s epistles and opened it to Romans 13. Stricken, he gave his life to Christ. That’s the part of the story we remember—but it was prompted by a chain of testimony reaching all the way back to the first century.

Benedict of Nursia (c. 480–547) in his Rule prescribed readings from the church fathers as well as the Bible to help form his monks in the faith. He noted that early Christians prayed through “in a single day what I pray we tepid monks may get through in a whole week.”

Frequently those seeking renewal of medieval Catholicism argued they were returning to ancient teachings. John Wycliffe (1330–1384) appealed to Augustine when arguing against transubstantiation:

Nobody on earth is able to see Christ in the consecrated Host with the bodily eye, but by faith. . . . This same opinion is confirmed by blessed Augustine’s statement. . . . ”What is seen is the bread and the cup . . . but what faith demands is that the bread is the body of Christ and the cup is his blood.”

In his defense of his refusal to recant at the Council of Constance, Jan Hus (c. 1369–1415) also name-checked Augustine:

I, Jan Hus, in hope a servant of Jesus Christ, am not willing to declare that every article drawn from my books is erroneous, lest I condemn the opinions of holy doctors, particularly of the blessed Augustine.

We teach nothing new

The popular image of Luther pictures him as breaking with everything. Yet while he denied that the church fathers were error-free, he firmly believed his movement was restoring the ancient truth of the gospel:

We teach nothing new. We teach what is old and what the apostles and all godly teachers have taught, inculcated, and established before us.

Writers of a purer age

In the Institutes John Calvin claimed the church fathers were not purely Roman Catholic property:

It is a [slander] to represent us as op­posed to the Fathers (I mean the ancient writers of a purer age), as if the Fathers were supporters of their impiety.

He acknowledged errors in the fathers, but also used them to argue against clerical celibacy, fasting, and even scholastic theology itself:

All the fathers with one heart have abhorred and with one voice have detested the fact that God’s Holy Word has been contaminated by the subtleties of sophists and involved in the squabbles of dialecticians. . . . Why, if the fathers were now brought back to life, and heard such brawling art as these persons call speculative theology, there is nothing they would less suppose than that these folk were disputing about God!

Our first entry is adapted from Chris Armstrong’s Patron Saints for Postmoderns (2009).