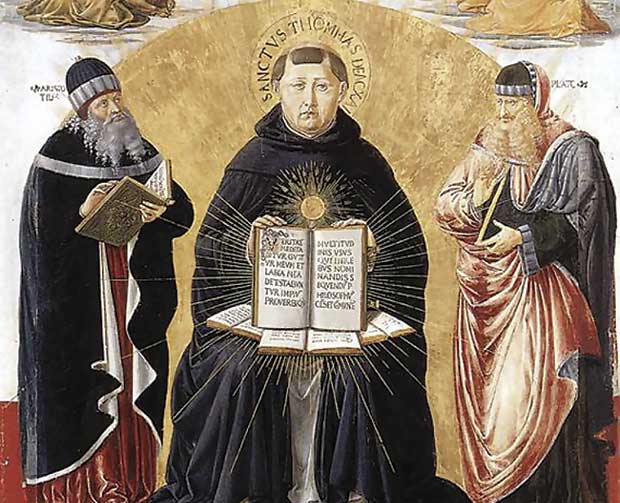 IN 1946 in a world shattered by war, the Catholic Church stood as an unmoved landmark. For Catholics the church offered refuge from the chaos of the twentieth century and a moral and intellectual vantage point from which to criticize the secular world and offer a constructive alternative. The bedrock of this confident, assertive Catholicism was the philosophy and theology of Thomas Aquinas (1225–1274), enshrined by Leo XIII in his 1879 encyclical Aeterni Patris as “the special bulwark and glory of the Catholic Faith.”

The intellectual system of Neo-Thomism, built on Aquinas’s teachings, claimed to represent timeless, fixed, objective truth drawn from two sources: rational inquiry into the created, natural world and the supernatural truth revealed by God in Scripture and tradition. But even as Aquinas’s teachings gained ground in the nineteenth century, other scholars were claiming that divine revelation must be understood as part of time-bound processes studied by historical scholarship.

Early twentieth-century popes fought these views, which they dubbed “modernist.” Pius X explicitly condemned them in 1907. And yet no condemnations from the Vatican could keep Catholic intellectuals from the scholarly study of the past. Cautiously, with one eye on the papal condemnations, some young scholars began to tiptoe back onto the forbidden ground.

These scholars sought much greater openness to ecumenism and a recovery of much more ancient liturgical and Scripture study practices, and they had a generally more positive outlook on modern thought and cultural trends. So it was that in 1946, Réginald Garrigou-Lagrange, leading Dominican scholar at the Pontifical University of Saint Thomas Aquinas in Rome, found himself perusing a collection of writings from France. Garrigou-Lagrange grew more deeply concerned with every page he turned. Indeed he had every reason to be troubled. Hardly the first, these writings were the latest in a line of attacks on Neo-Thomism from the Jesuit faculty at Fourvière in France.

Patristics scholar Henri de Lubac (1896–1991) had settled in Fourvière-Lyon in 1929, and his influence was spreading. He taught at the Catholic University of Lyons but he lived at the Fourvière scholasticate (a type of seminary) just outside the city. De Lubac’s writings caused a stir. His 1944 book on the Eucharist, Corpus Mysticum (The Mystical Body), seemed a thinly veiled attack on the traditional Catholic doctrine of transubstantiation, promulgated in the thirteenth century, that the Eucharistic elements became the actual body and blood of Christ.

Only two years later, de Lubac directly challenged Neo-Thomism with The Supernatural (1946). This book attacked the separation taught by Thomists between nature and the supernatural, between philosophy and theology, and between church and world. Furthermore it reached back beyond Aquinas to earlier medieval and ancient patristic sources for support.

De Lubac’s influence was multiplied when a steady stream of his students took up the pen. Hans Urs von Balthasar (1905–1988) moved to Fourvière from Switzerland in 1929 to study theology. There de Lubac drew his attention to early fathers such as Origen and Gregory of Nyssa. Balthasar wrote later that his teacher “showed us the way beyond the scholastic stuff to the fathers of the church and generously lent us all his own notes and extracts.” In 1939 Balthasar wrote “The Fathers, the Scholastics, and Ourselves,” which deliberately went back behind Aquinas and the scholastics to the foundational Christian theologians who shaped the faith before 700 AD (see CH issue #80) as an enduring source for Christian doctrine.

Looking to the East

Jean Daniélou (1905–1974), another protégé of de Lubac, also felt the deep attraction of the spiritual writings and scriptural interpretive methods of the church fathers. Daniélou like his fellow students in Fourvière, looked to de Lubac as his academic and spiritual mentor. Together with de Lubac, he started republishing the church fathers in the Sources Chrétiennes (Christian Sources) series—initially focusing on the Eastern fathers, whose approach diverged more sharply from Neo-Thomism than that of Western fathers. In 1943 he also published a groundbreaking book on Gregory of Nyssa, Platonism and Mystical Theology.

Another critic, a young Jesuit theologian named Henri Bouillard (1908–1981), joined the Fourvière faculty in 1941. He published a book in 1944 called Conversion and Grace in Thomas Aquinas, which some saw as an attack on Thomism and on the need for divine grace in the conversion process.

Meanwhile up north in Belgium, Dominicans such as Marie-Dominique Chenu (1895–1990) had also been questioning Neo-Thomism. Chenu, professor of the history of dogma at the seminary Le Saulchoir, had done his doctorate under Garrigou-Lagrange at the Angelicum, as the Pontifical University was usually called. But the two theologians’ approaches could hardly be more different.

Chenu appealed for a “return” to the sources and for the “historical method.” Suspicious of perennial theological systems such as Aquinas’s, he said that Christian experience and the church’s liturgy were key sources for Christian doctrine. In the 1930s Chenu advocated alongside the jocistes (the Young Christian Workers organization) for better labor conditions for ordinary workers. To some this was dangerously close to Marxism. Chenu himself jokingly commented that some thought there were two Chenus, “one old medievalist . . . and a kind of scoundrel who runs in the lines of fire of the holy church.”

But there was really only one Chenu, and to Garrigou-Lagrange his student’s academic work and his social engagement both stemmed from the same troubling starting point. In 1931 Chenu’s former student Yves Congar (1904–1995) had joined him at Le Saulchoir. Like his teacher the young Dominican priest overstepped commonly accepted ecclesial boundaries. His Divided Christendom (1937) was one of the first Catholic works that seriously engaged ecumenical relations, not only with the Orthodox but also with Protestants. Going backward also meant looking outward.

To Neo-Thomist Garrigou-Lagrange, who later earned himself the moniker “the sacred monster of Thomism,” these writings all seemed like a betrayal of truth, trading Aquinas’s intellectual approach for something much more nebulous. He countered with a vehement article in the journal Angelicum in 1946 entitled “La Nouvelle Théologie, où va-t-elle?” (published in English as “Where Is the New Theology Leading Us?”).

Here he attacked the relativism that he saw as inherent in the approach of Bouillard and de Lubac. He also rejected the evolutionary ideas of their colleague Pierre Teilhard de Chardin (1881–1955) and defended transubstantiation. In each of these problem areas, Garrigou-Lagrange was convinced he was witnessing modernism. The name “new theology” stuck, giving de Lubac and his colleagues an ironic name for their return to old sources.

From condemnation to exoneration

Initially the success of this new-yet-old theology seemed far from guaranteed. In 1950 both de Lubac and Bouillard were exiled from Fourvière and moved to Paris. Some of de Lubac’s most controversial books were put on the Index of Prohibited Books. In the same year, Pius XII’s encyclical Humani generis condemned their theological views. In 1954 the jociste French worker-priests were forced to abandon the factories, and Chenu moved to Rouen. Congar was exiled from Le Saulchoir and eventually ended up in Strasbourg.

Yet by 1960 de Lubac and Congar were put on the preparatory Theological Commission for the Second Vatican Council. Ultimately Vatican II exonerated and perhaps even enshrined nouvelle théologie. The word they had used for retrieval of the church fathers, ressourcement, became a byword of the council. And its effects tracked with their program (see sidebar).

After the council though, they all took different paths. Chenu remained interested in contemporary culture. Theologians, he thought, had the prophetic task of reading the “signs of the times.” He highly prized the autonomy of nature that modernity had brought and was optimistic about humanity’s future. Eventually he would mentor both Gustavo Gutiérrez, founder of liberation theology, and Matthew Fox, founder of the interfaith “creation spirituality” movement. Congar’s outlook mirrored that of his former teacher, Chenu.

By contrast de Lubac and Balthasar became skeptical of further reform. De Lubac felt secularists had hijacked the council’s agenda, calling them the “para-Council.” He had turned to the church fathers to combat modernity, but it seemed his colleagues were now lapsing into the very secularism he had always resisted.

These differences came out in the open when the two groups established separate theological journals. Chenu and his friends founded Concilium in 1965, which aimed to spur further reforms in the church. Meanwhile Joseph Ratzinger (later Pope Benedict XVI), Balthasar, and others established Communio in 1972 to shore up traditional teaching. The former accused the latter of stifling the progress of Vatican II. The latter worried about progressive Catholic theologians capitulating to secularism.

Despite such differences both groups focused on one underlying issue: bringing back ancient mystery. The Latin term mysterium has a sacramental connotation; in much Christian thought, mysterium and sacramentum had been used identically. Nouvelle theologians believed that a sacramental outlook on life is needed to combat modernity. Modernity after all had separated heaven and earth, philosophy and theology, and nature and the supernatural. It had banished God upstairs to leave the main floor empty. The nouvelle theologians believed that Neo-Thomism had unwittingly contributed to this rift by treating faith as entirely separate from everyday concerns.

The only way to bring God back onto the main floor is by understanding that the sacraments are part of a grand sacred mystery present in everyday life. In his teaching on the Eucharist, de Lubac soft-pedaled transubstantiation without actually denying it; he was convinced that “the Eucharist makes the church.” The final purpose of the Eucharist is not Christ’s presence in the bread. Instead its ultimate reality is church unity.

When nouvelle theologians rejected Neo-Thomist definitions of truth, they did not believe they were lapsing into relativism. Rather they were stating that God’s capital-T Truth is the eternal mystery in which small-t human truth claims to participate. The movement recognized that the world around us contains mystery that escapes the outward senses. Instead of toppling Catholic thought, it sought to retrieve premodern theological tradition and recover the divine mystery of Christ as the heart of all created being. C H

Hans Boersma is St. Benedict Servants of Christ Professor of Ascetical Theology at Nashotah House. He is the author of a number of books including Nouvelle Théologie and Sacramental Ontology.