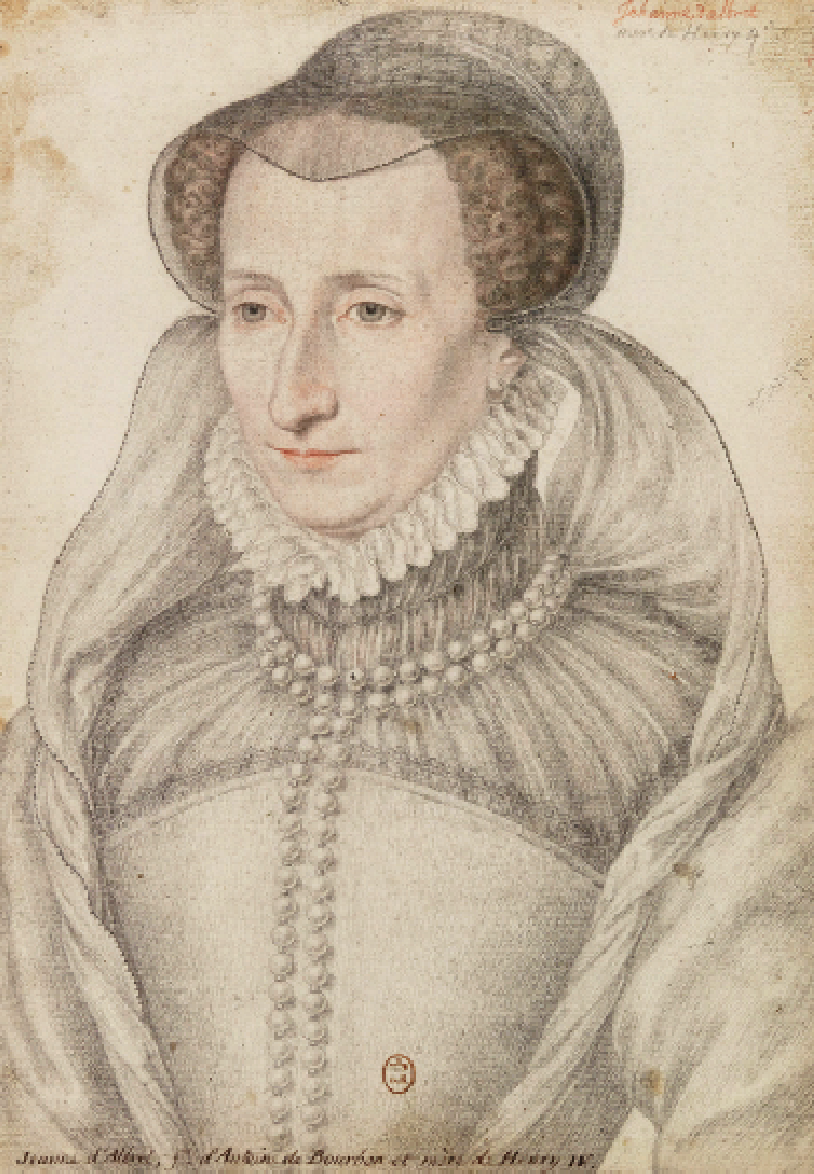 MARGUERITE DE NAVARRE (1492–1549) and her daughter, Jeanne d’Albret (1528–1572), were a rare and powerful force: a mother-daughter duo who shared an interest in the new religious ideas spreading across sixteenth-century Europe and helped to sustain the fledging evangelical movement in Catholic France. Court life complicated their personal relationship, but their common commitment to reform and renewal had an indelible impact across French-speaking Europe.

The only sibling of Renaissance French king Francis I (1494–1547), Marguerite was a luminary in French court circles and a serious patron of the arts. She was also a gifted writer in her own right, penning poems, plays, and a brilliant collection of short stories, The Heptaméron (1558), published posthumously; they exposed corruption and abuses in the medieval church, including the predatory behavior of clergymen. After a childless marriage to the Duke of Angoulême ended with his death in 1525, Marguerite married Henri d’Albret, king of Navarre, in 1527. His tiny principality was a sovereign state positioned between two great superpowers: France and Spain. They had a son and a daughter, but only the daughter, Jeanne, survived to adulthood.

Like many noble children of the era, Jeanne spent her formative years in the care of governesses and private tutors, but Marguerite’s spiritual inclinations still shaped her daughter’s education and religious beliefs. Fearful that his wife’s religious activities would endanger his political interests at court, Henri demanded Marguerite recant her faith, but she refused. Years later Jeanne relayed how her father’s displays of anger and violence convinced her to wait until his death to make any public profession of the new faith.

Guillaume Briçonnet (c. 1472–1534), the bishop of Meaux, encouraged Marguerite’s interest in the new religious ideas circulating in Europe and became her private chaplain and personal confessor. Briçonnet introduced Marguerite to a group of reform-minded clerics and scholars, the Circle of Meaux, who felt called to regenerate the spiritual life of ordinary people. Convinced that the key to reform was giving lay men and women access to the Word of God in the vernacular, they supported programs of religious renewal in parishes. Many preachers associated with Briçonnet, including Guillaume Farel (1489–1565), went on to become key leaders of the French-speaking Reformation movement.

Marguerite’s outspoken defense of evangelical thinkers also earned her the enmity of theologians at the University of Paris, a bastion of Catholic orthodoxy. In 1533 the faculty condemned one of her poems, The Mirror of the Sinful Soul (1531), as heretical. But their actions did little to diminish Marguerite’s enthusiasm for renewal and reform in the church—or the literary success of the text. As a young princess, Elizabeth I of England read and translated the poem into English as part of her school lessons.

As her brother Francis I increasingly adopted repressive policies toward reformed ideas and practice, Marguerite retreated to Béarn and her estates in southern France. There she composed even more explicitly evangelical works. The most polemical piece was the play The Inquisitor (c. 1535–1536), which features a testy encounter between a pretentious inquisitor and a group of children who confound the illustrious theologian by the purity and simplicity of their belief, as one of the children announces, “in faith alone.”

For all her interest in reform, Marguerite did not fully embrace Protestantism, clinging to hope that renewal and reform would come from within Catholicism. Nonetheless her estates, particularly her chateau in Nérac, became a refuge for reform-minded theologians.

Brilliant humanist Jacques Lefèvre d’Étaples, translator of the New Testament into French, lived his last years in exile in Nérac. A young Jean Cauvin—we know him as John Calvin— also visited Marguerite in 1534, although he later became a vocal critic of many in her circle.

With a Franciscan priest at her side, Marguerite died in 1549, calling on the name of Jesus. A little more than a decade later, the daughter she had raised to respect God as “father, mother, and husband” became one of the most ardent champions of the Reformed faith in France.

At the tender age of 12, Jeanne d’Albret displayed the first sign of the legendary fermesse (stubbornness) and independent spirit that would define her leadership. Betrothed without her consent to Guillaume, Duke of Cleves, Jeanne drafted a formal protest. She later claimed Marguerite threatened to beat her into submission, but Jeanne refused to relent and had to be carried to the altar. When Guillaume betrayed French interests a year later, the pope granted petitions to dissolve the union, which had not been consummated.

Five years later Jeanne made a much happier marriage with the dashing Antoine de Bourbon (1518–1562), a first prince of the blood (the French term for nobles descended from royalty; Antoine could claim King Louis IX as his ancestor). Little matter that this marriage was also driven by politics beyond Jeanne’s power to control; Antoine was a young, handsome, and initially attentive husband.

As befitted a powerful prince, Antoine spent much time away waging war against the king of Spain and later against Protestant rebels as lieutenant general of France. During these absences he wrote loving letters from the field and nurtured Jeanne through the heartbreak of losing three children in infancy. Henri, born in 1553, and Catherine, in 1559, survived to adulthood. Both in their own ways would become defenders of the Reformed tradition.

Antoine’s wandering affections created the first strain between the young spouses, but religion produced an irreparable breach. Queen of Navarre since her mother’s death in 1555, Jeanne declared her conversion to the Reformed faith on Christmas Day 1560 and promptly set about establishing Reformed worship in her southern domains. In Béarn she ordered the confiscation of the Catholic church’s property, diverting ecclesiastical revenues toward Protestant pastors’ salaries and an academy to train Calvinist clergy. Like her mother Jeanne carried on an avid correspondence with reformers, who assisted the queen with her religious efforts.

At first Antoine seemed to share Jeanne’s enthusiasm, but his toleration was short-lived. When Calvinists attacked religious sculptures and altars as pagan idolatry and desecrated the ancestral graves of the Bourbon family, he took matters into his own hands and dismissed the Protestant tutors Jeanne had hired for Henri (1553–1610). Antoine installed the young prince at court in Paris and banished Jeanne back to Béarn.

This bitter separation of mother and son lasted for five years, during which Henri was educated by men of impeccable Catholic credentials and mentored in court life by none other than the queen mother of France, Catherine de’ Medici (1519–1589). By 1562 the simmering conflict between Huguenots (Protestants) and Catholics in France erupted into a full-scale war that lasted more than 30 years. Antoine’s death while leading Catholic armies of King Charles IX left Jeanne a widow fully in charge of her own fortunes.

As a woman Jeanne could not hold the military titles and offices that were essential pillars of aristocratic power, so she cultivated the good graces of her brother-in-law, Louis de Bourbon (1530–1569), Prince de Condé, also an ardent Protestant. With Condé’s help, she had Henri recognized as the admiral of Guyenne as his father had been. The admiralty brought in significant revenues, which maintained Huguenot armies.

But the struggle was far from over. Condé’s involvement in the “Surprise de Meaux,” a failed plot to kidnap young King Charles IX (1550–1574) in 1567, had perilous consequences. It was one of many Protestant attempts to seize control of key members of the house of Valois. Fearing reprisals Condé sought refuge in the heavily fortified Atlantic port city of La Rochelle, a Protestant stronghold. In time Jeanne too would leave her estates in Béarn for the safety of La Rochelle.

A revolt of Catholic nobles in Béarn and Navarre in 1568 revealed the fragility of Jeanne’s position; it was rumored Charles IX had encouraged the rebels. With her children in tow, Jeanne fled toward La Rochelle. As she journeyed through enemy territories pursued by indomitable Catholic warlord Blaise de Monluc, noble supporters joined her. When she finally entered La Rochelle’s massive gates, some 400 nobles and their armed retinues triumphantly marched with her.

For the next three years, behind the fortifications of La Rochelle, Jeanne headed a council of war, raising foreign money and troops and pledging her own fortunes to champion liberty of conscience and freedom of worship in France. She also dispatched emissaries to Protestant courts in England and the Holy Roman Empire to solicit financial and military aid, offering her jewels as collateral to Queen Elizabeth I of England, who became a critical ally.

Jeanne’s vision for a Huguenot homeland based in southern France and her long involvement in military strategizing earned her the undying support of many of Condé’s followers. When he was killed in battle in 1569, Jeanne effectively became political head of the Huguenot movement, working with Gaspard de Coligny who commanded Protestant troops in the field. In the summer of 1570, her dogged efforts helped bring the French crown to the negotiating table to sign the Peace of Saint-Germain, an agreement highly favorable to Huguenot demands for freedom of worship, equality before the law, and military security.

Jeanne readily admitted that she did not possess her mother’s literary talents, but she proved to be an able polemicist and shrewdly marshalled the printing press to mobilize support for the Huguenots. In La Rochelle she actively encouraged Calvinist printers and financed printing Bibles, tracts, and political broadsheets. She also subsidized translating the Psalms into the Béarnais dialect and the New Testament into Basque (a language spoken in northern Spain and southern France).

In 1569 she penned a masterpiece of political propaganda known as the Ample Declaration in which she defended the right of Huguenot nobles to raise arms and defend themselves against religious tyranny. The work quickly became a centerpiece of Huguenot theories of political resistance.

Jeanne died in Paris in 1572 at age 44—in the midst of preparations for the marriage of her son, Henri of Navarre, to Marguerite of Valois, King Charles IX’s younger sister. The union was the brainchild of Medici, who hoped a marriage between the two warring royal houses would signal a lasting peace between Catholics and Protestants.

Rumors soon spread that Jeanne’s death was not due to natural causes, even after an autopsy performed by Catherine’s court physician indicated she had died of complications from tuberculosis. The gossip stoked rising religious tensions in the capital, culminating in August 1572 with the infamous St. Bartholomew’s Day massacre that left thousands dead in the streets of Paris and in the provinces.

But in the tumultuous decades that followed, Jeanne’s son continued her mission, leading the Huguenot army to victories in the field. Eventually he converted to Catholicism to ascend to the throne of France as Henri IV and brought an end to religious warfare with the Edict of Nantes in 1598. CH

S. Amanda Eurich is professor of history at Western Washington University and author of The Economics of Power: The Finances of the House of Foix-Navarre-Albret during the Wars of Religion. 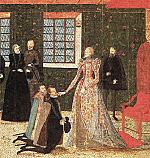