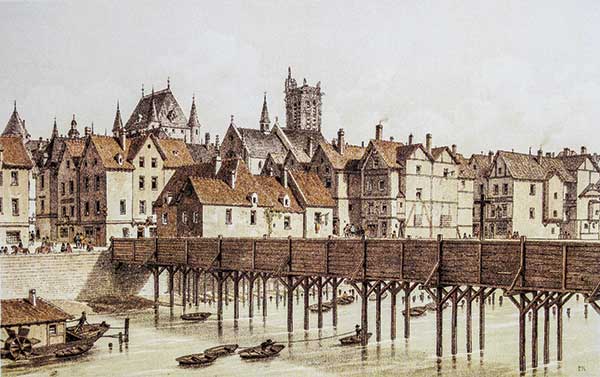 [Paris, pictured here in 1580 just before Nicholas Herman’s birth, suffered through tumult and war in his lifetime.]

By the seventeenth century, the faith-haunted world that had birthed the great medieval mystics had given way to the Renaissance, the Reformation, and the Enlightenment. Yet Brother Lawrence (c. 1614–1691) quietly practiced a spiritual discipline that continues to shine, inviting everyone into mystical depths.

Because his life was so ordinary and his practice so simple, Brother Lawrence bridges the medieval-modern divide; he had no interest in or capacity for theological nuances or complicated devotions. Like his medieval precursors, he sought only to know God better and serve him more. Removed from the religious tumult of his day, he became one of the most accessible mystics of any age.

from battles to the resurrection

Nicholas Herman was born to a peasant couple in the Lorraine region of France. Like many young men who lived in poverty and sought a steady source of food and shelter, he joined the army. French religious wars between Catholics and Protestants were still a recent memory, and the 1600s soon developed into a century of violence too—including a civil war and the shattering Thirty Years War (1618–1648). Louis XIV, king of France, had plenty of military ambitions; soldiers were a critical component of his vision.

Herman, however, didn’t have a particularly successful military career. According to his biographer, Fr. Joseph de Beaufort, the German enemy captured and ill-treated him. After his release he returned to battle; but he was then injured by the Swedes, leaving him permanently disabled. No doubt Herman also suffered from what today we call post-traumatic stress; his biographer mentions, “He often relived the perils of military service.” He returned home and tried the life of a footman to the rich, but apparently he was such a blundering fellow that he soon lost that job as well.

Herman then resolved to dedicate the rest of his life to prayer and service to God. He entered the monastery of the Discalced Carmelites in Paris, making his profession as a lay brother in 1642. He became Brother Lawrence of the Resurrection, choosing as his patron St. Lawrence (225–258), a third-century deacon and martyr of the church in Rome. He added “of the Resurrection” to honor his new life.

That new life was not heroic or prestigious in any way. Brother Lawrence’s name is known to us today not because of great theological teaching or inspiring social engagement or lyrical writings—but because of a simple, singular spiritual practice. As a member of a religious order, Lawrence was naturally exposed to the community’s rhythms and practices. Yet he found many of the prescribed devotions confusing and distracting, and eventually simplified them to a single focus: directing all his love and attention to the presence of God.

In the second of his letters collected in the famous book The Practice of the Presence of God, he wrote:

I make it my business only to persevere in His holy presence, wherein I keep myself by a simple attention, and a general fond regard to God, which I may call an actual presence of God; or, to speak better, an habitual, silent, and secret conversation of the soul with God.

This silent, secret conversation did not even require solitude or stillness. Assigned to the monastery’s kitchen, Brother Lawrence took up the life of community cook and dishwasher—a job he disliked intensely but embraced thoroughly for 30 years. He found that his assigned work in the monastery was itself the channel of devotion:

Nor is it needful that we should have great things to do. . . . We can do little things for God. I turn the cake that is frying on the pan for the love of Him; and that done, if there is nothing else to call me, I prostrate myself in worship before Him Who has given me grace to work. Afterwards I rise happier than a king.

This interior practice of constantly turning the attention of the heart to the loving presence of God became a spiritual rhythm that, through much effort and mental creativity, brought Brother Lawrence into a transforming relationship with God. He explored all the ways he could give himself to the presence of God.

Shortly before becoming a soldier, Herman had had his first direct encounter with the overwhelming love of God. His biographer tells us that a simple vision of a tree, bare in the cold season, kindled in him a profound understanding of God’s sovereign and steadfast love:

Considering that within a little time, the leaves would be renewed, and after that the flowers and fruit appear, he received a high view of the providence and power of God, which has never since been effaced from his soul. This view had perfectly set him loose from the world, and kindled in him such a love for God, that he could not tell whether it had increased in above forty years that he had lived since.

According to Brother Lawrence, this was a gift from God, not a formula for everyone’s spiritual awakening. Others could stare at a tree in winter for days on end and not receive this revelation. Just as many other well-known Christian mystics had ordinary experiences—illness or a sudden recognition of the presence of Jesus in art or an encounter with the poor—so this “seeing” of God’s presence through the barren tree was a divine word to Brother Lawrence. That tree “first flashed in upon my soul the fact of God,” he said. The power of this vision never left him.

The vision of the barren tree had served as the beginning of Brother Lawrence’s mystic journey, but it was through great and unceasing effort that he continued to plumb the depths of revelation, pursuing the interior life with ferocious tenacity. He shared this characteristic passion with mystics throughout church history. In fact he testified that the first 10 years of his practice were a great struggle: “During this time I fell often, and rose again presently.” He advised:

Be not discouraged by the repugnance which you may find in [the practice] from nature; you must do yourself violence. At the first, one often thinks it lost time; but you must go on, and resolve to persevere in it to death, notwithstanding all the difficulties that may occur.

He described those years as fraught with suffering, fears, guilt, and despair. Yet he persisted until one day God gave him another grace:

When I thought of nothing but to end my days in these troubles (which did not at all diminish the trust I had in God, and which served only to increase my faith), I found myself changed all at once; and my soul, which till that time was in trouble, felt a profound inward peace, as if she were in her center and place of rest.

A spirit of willing service complemented these gifts of God—the early vision that sustained him throughout his life and the later grace given after years of struggle—and his resolute response of faithful effort.

the malice of sinners

Finally, and perhaps most critically, Brother Lawrence, like every Christian mystic, derived his energy from and spent it on one thing: the love of God. In the second letter collected in Presence, he wrote:

I have no will but that of God, which I endeavor to accomplish in all things, and to which I am so resigned, that I would not take up a straw from the ground against His order, or from any other motive but purely that of love to Him.

Living in Paris, a city rife with insurrections, barricades, and street violence, Brother Lawrence was well aware of the chaos around him. His biographer marveled at his serenity:

As for the miseries and sins he heard of daily in the world, he was so far from wondering at them, that, on the contrary, he was surprised there were not more, considering the malice sinners were capable of: that for his part, he prayed for them . . . knowing that God could remedy the mischiefs they did.

While Brother Lawrence did nothing to outwardly change the world, his life and witness have done so as, soul by soul, others take his advice and practice the presence of God. His more well-known contemporaries—Francis de Sales (1567–1622); Blaise Pascal (1623–1662); Jeanne-Marie Bouvier de la Motte-Guyon or “Madame Guyon” (1648–1717); and François Fénelon (1651–1715)—had their own experiences of the love of God, and their stories, too, powerfully encourage the life of faith. None of them, though, are quite as pure and unpretentious as this gentle reminder from Brother Lawrence: “Lift up your heart to Him, the least little thought of Him will be acceptable. You need not cry very loud; He is nearer to us than we are aware of.” CH

The fires of love

From the highest nobility to the lowest working class, medievals heard the call of God over four centuries.

Here are some recommendations from CH editorial staff and this issue’s authors to help you understand medieval mystics and their world.

The issues authors and editors