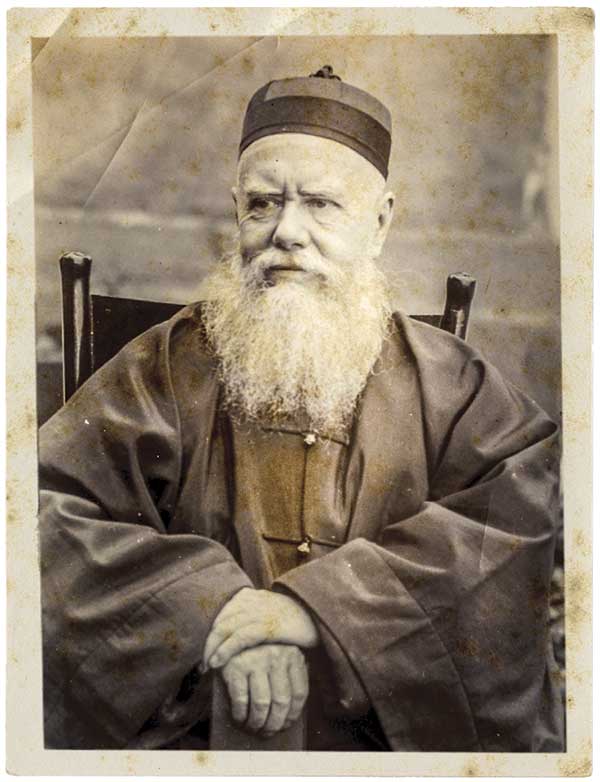 [Hudson Taylor after many years of service in China]

TWO SCROLLS with Chinese characters graced the mantel of Hudson Taylor’s (1832–1905) home. The calligrapher’s playful stroke of bamboo brush dipped into lampblack ink and drops of water on Xuan paper concealed the mastery and artistry behind the seemingly simple words. The Chinese calligraphy depicted two names that reminded Taylor of God’s provision: Ebenezer and Jehovah-Jireh.

These names come from 1 Samuel 7:12: “Then Samuel took a stone and set it up between Mizpah and Jeshanah, and named it Ebenezer; for he said, ‘Thus far the Lord has helped us’” and Genesis 22:14: “So Abraham called that place ‘The Lord will provide’ (Jehovah-Jireh); as it is said to this day, ‘On the mount of the Lord it shall be provided.’”

Ebenezer: a depiction of God’s past provision. Jehovah-Jireh: a designation of God’s provision promised for the future. The verses are often cited as among Taylor’s favorites. Together they shape an overarching narrative of God’s salvation story in Scripture and give us insight into Taylor’s conviction to live by faith.

As Taylor’s China Inland Mission (CIM) traversed beyond the coastlands, the reminders of God’s provision became lived and breathed realities as he witnessed: “Upon past Ebenezers we built our Jehovah-Jireh.”

the names of God

It may have been Andrew John Jukes (1815–1901), an English theologian and early influence on Taylor, who introduced him to these aspects of God’s character. Years later Jukes published The Names of God in Scripture (1888), where he claimed:

I purpose therefore, if God permit, to call attention to the names under which God has revealed Himself to man in Holy Scripture. The first four we find in the earlier chapters of Genesis. They are, first, “God,” (in Hebrew, Elohim); then, “Lord,” (or Jehovah); then, “Almighty,” (El Shaddai); and then, “Most High,” (El Elyon).

For Jukes the varied names and descriptions of God and God’s character were elements in an elaborate mosaic whose pattern revealed the divine provision and purpose across time and space. Jukes would have a profound impact on Taylor’s life too.

Most accounts of Taylor’s life feature his June 1849 conversion to the faith at age 17 (which was an answer to his mother’s prayers) and his December 1849 call to China, but little is written regarding Taylor’s adult baptism by Jukes. He baptized Taylor in either 1852 or 1853 at the Hull Brethren Assembly located in Hull, a port city in East Yorkshire.

Even Early Years: The Growth of a Soul (1911), written by Taylor’s son F. Howard Taylor and daughter-in-law Mary (Guinness) Taylor, neglects the baptism despite the many dramatic stories it shares from this season of Taylor’s life. As a young man, he lived in voluntary poverty, subsisting on brown bread and oatmeal, to serve in Drainside

(a poverty-stricken section of Hull), while simultaneously learning the medical arts from Dr. Robert Hardey.

Taylor’s baptism among the Brethren actually formed part of a coherent trinity of events in his life: conversion to Christ, call to China, and commission by baptism into his vocation. All three prepared Taylor to leave his permanent mark on the worldwide mission movement, but the Brethren had an unmistakable influence on how he would live through faith.

The Brethren had emerged as a group of separatists from the Anglican tradition in the 1820s in Dublin; they deemed themselves not a church, but instead, a movement (see “Müller and friends,” pp. 24–28). By 1831 the movement had reached Plymouth and grown under the guidance of three leaders: George Wigram, Benjamin Wills Newton, and John Nelson Darby (see “Caught up to meet Jesus in the clouds,” pp. 34–36).

They preached and practiced a call to ministry shaped by the Spirit rather than confirmed by ordination or academic study, a simplicity in worship marked by elements of Acts 2 and 4, a drive toward unity across denominations, and an overarching devotion to the apostolic church as the primary foundational example of a church on the move. They eschewed what they deemed the apostasy of staid denominations and errant separatist efforts.

While unity was an aspiration, divisions between Open and Exclusive Brethren divided the Brethren assemblies of Taylor’s time. The split had occurred in 1848, just prior to Taylor’s baptism: Taylor participated with the Open Brethren. For the Brethren the noun “the church” was a misnomer. Rather they believed that the verbs of the early apostolic witness compelled them to break bread, to serve, to pray, to sing, and, perhaps most important for Taylor, to go.

If Jukes introduced Taylor to God as Ebenezer and Jehovah-Jireh, George and Mary Müller further exemplified the lesson. In the Müllers Taylor found a living example of dependence on God as provider of past and future needs.

Müller was known famously by now for “living by faith,” relying wholly on God for support in each moment of need (see “Even the wind obeyed,” pp. 18–20). In his Narratives Müller demonstrated over and over the faith principle by which he lived and served:

A brother in the Lord came to me this morning and, after a few minutes of conversation gave me £2,000 for furnishing the new Orphan House. . . . Now I am able to meet all of the expenses. In all probability I will even have several hundred pounds more than I need. The Lord not only gives as much as is absolutely necessary for his work, but he gives abundantly. This blessing filled me with inexplicable delight. He had given me the full answer to my thousands of prayers during the [past] 1,195 days.

Müller’s influence on Taylor took root, though living fully by this faith-mission practice would take time to flourish. The two men corresponded, and in later years Müller sent money to China to support the CIM.

Shortly after his baptism, Taylor joined the Chinese Evangelization Society (CES) as its first missionary to China. This society had arisen from the life and witness of German Lutheran missionary Karl Gützlaff (1803–1851), who had previously inspired the famous Dr. David Livingstone (1813–1873) to set out as a medical missionary to Africa.

Taylor’s experience with the CES proved trying. In spite of his past history of relying on generosity while living in Drainside and practicing medicine, he now found it difficult to raise support as required. He resigned from the CES in 1857 in frustration (Müller supported this move), but continued to live and work in the Chinese city of Ningbo. While there he married fellow missionary Maria Dyer in 1858. In 1860 he and Maria and their first child, Grace, returned to England for a six-year respite due to Taylor’s poor health. There he finished translating the Bible into the Ningbo dialect of Chinese and completed his medical diploma.

to live by faith

In preparation for a return to China in 1866, Taylor promised to “live by faith” in the summer of 1865, in the way that Müller had demonstrated to him so many years before. He hoped to reach 11 unreached provinces beyond the coastlands of China toward the interior.

Because of the uncertainty of the scope, traditional mission organizations were unwilling to offer resources in support of his venture. So Taylor went on his own, sailing with his family back to China on May 26, 1866. This marked the beginning of the China Inland Mission. He set forth without a traditional denomination, without financial support, and without the credential of ordination, but guided by the promise of Scripture for those unreached beyond the coastline in China.

Some scholars have suggested Taylor’s aim of converting the interior of China was motivated by even more than the noble desire to bring the good news of Christ to those 11 provinces. It also may have reflected Taylor’s noncompetitive spirit with other missionaries along the coast. Perhaps this was another expression of the Brethren value of unity.

In fact many aspects of Taylor’s faith-mission principles were motivated by the question, does this practice unite or divide? For Taylor nonordained and ordained missionaries carried the same authority; men and women (including single women) were welcomed as missionaries in the field; all denominations were invited as accepted partners; and each missionary was directly responsible to God, rather than an institutional body, as his or her authority.

From the moment Taylor and fellow missionary Joseph Edkins set forth up the Huangpu River from Shanghai, they followed its dark water, not unlike the line of a calligrapher’s quill, as they traveled to the interior. Through his work in the China Inland Mission, Taylor embodied what he deemed “the exchanged life”: Christ lived in and through him, giving him new life and a vital,

That faith allowed Taylor to withstand the difficulties of the initial language barriers, the challenges of the opium trade, and the occasions when relationships between the missionaries and the local people became tense or even hostile. Even more his depth of faith allowed Taylor to withstand grueling grief over the lost lives of several of his children, and eventually Maria too in 1870. He married missionary Jennie Faulding in 1871, and their first two children died as well.

The path of Taylor’s travels and travails continued to develop like those characters on the parchment paper: Ebenezer and Jehovah-Jireh. When Taylor prayed and petitioned God for a hundred new missionaries, more than that signed on. When the Boxer Rebellion shook the very foundations of local trust in 1900, Taylor and his team of missionaries remained faithful. When Taylor arrived Christians in China could be counted like ink drops on a page; today estimates place the number of Christians in China as high as 100 million.

In China’s Spiritual Need and Claims (1865), Taylor presented the faith-mission principle in three propositions: missionaries would be driven by apostolic evangelism and not by divisive denominationalism, missionaries would not depend on debt nor would they solicit funds, and missionaries agreed to serve without guaranteed income.

Without temporal support missionaries relied solely on God’s provision and the sustenance of Scripture. Taylor’s writing extended that promise of provision. It is in an 1887 edition of China’s Spiritual Need and Claims that we find his full statement of trust: Upon past Ebenezers we built our Jehovah-Jireh. They that know Thy name, will put their trust in Thee. The experience of these nineteen years abundantly shows how safe it has been to base our expectations on the promises of the living God. CH

Lisa Nichols Hickman is a Presbyterian pastor, writer, and doctoral candidate at Duquesne University. She is the author of Writing in the Margins: Connecting to God on the Pages of Your Bible