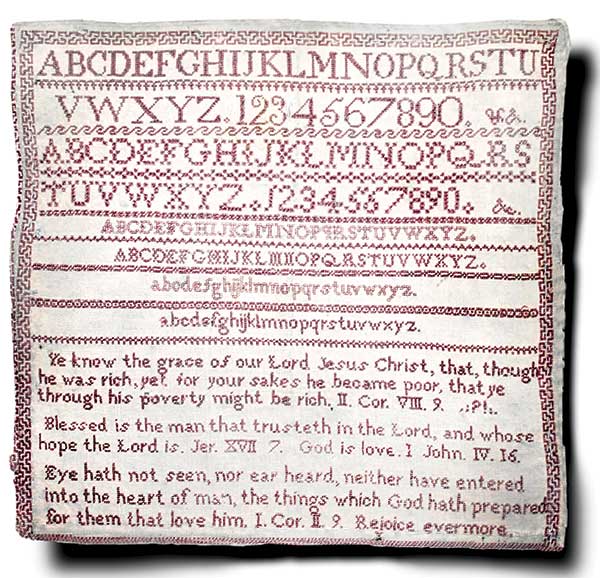 [A pillow made in the Müller orphanage]

Jennifer Woodruff Tait: Where we are sitting now is not part of the original complex, right?

Phil Thomas: Right. This house was bought in the late 1940s as the administrative offices of Müllers after Ashley Down closed. After World War II, when Britain established the welfare state, a lot of charitable work that had been done by philanthropic Victorian gentlemen—like Müller—was taken over by the state. There were fewer orphans during the war, and the military quarantined the Ashley Down houses. The orphan work was moved into “scattered homes” in Bristol, where a married couple would oversee a house of 10 to 15 youngsters. This continued into the 1970s.

When those closed, as an organization we wanted to continue to benefit the most vulnerable, so we established day-care and family centers in and around Bristol—nursing groups, parenting courses, support groups for single mums—until the mid-1990s. At that point the decision was made to move into partnering with local churches rather than being a para-church organization providing those services ourselves.

We also ran elderly care homes for former orphans until the 1990s, but we realized that we could not give the time and effort necessary to meet Care Quality Commission requirements, so we let professionals take those over.

JWT: What does Müllers do today?

PT: First, we resource local churches and encourage them to reach out and serve their local schools using national initiatives such as Prayer Spaces in Schools and Open the Book. Secondly, we resource believers to be strong in the faith. I run one-day-a-week theology courses to help those for whom Bible college is one step too far. We also use social media and technology to spread the Müllers story. [I was given two lovely short books—George Müller and His 10,000 Children for kids and The Bristol Miracle for adults—which tell the story of Müller’s life and work.—JWT]

The Scripture Knowledge Institution part of the work is still going strong, and we have around 230 partners in this country and worldwide. We try to maintain a connection, not just give money. If it’s just a financial partnership, what’s Christian about that? We have a monthly prayer digest we send around, so someone in Zambia can be praying for someone in Chile who is praying for someone in Mongolia. We have a daily prayer meeting in this room at 9:30 when we pray for partners and for confidential needs.

Müllers has a pretty good name in the city. We represent something prayerful and independent of denominational ties. I think people would call us a Christian organization with integrity.

JWT: Tell me more about Prayer Spaces in Schools. That would be difficult to do in the United States.

PT: The UK has a national curriculum which includes religious instruction requirements about different religions. Prayer Spaces in Schools offers easy-to-use material that conforms to the national curriculum requirements for learning about Christianity. The average teacher is a non-Christian and ends up just singing “We plow the fields and scatter” [a famous Anglican hymn], so it’s great to offer something more than that. In addition Müllers has a team who will go in and talk about George Müller, his life of faith, and his belief in the power of prayer. Because Anglicanism is the established religion, even though we’re not Anglican, people have a vague idea that they know what Christians are like.

PT: We call them Old Boys and Old Girls and there are around 20 who still gather for reunions, from those who lived in the “scattered homes.” They’ve organized the reunions themselves, but for the past 20 years or so we’ve maintained a connection with the group. Those who come have fond memories of their time at Müllers.

JWT: What is at Wilson Street and Ashley Down today?

PT: The Wilson Street homes were damaged during World War II and have been almost entirely demolished and rebuilt. There are plans to put a plaque on the building that stands there now. The Ashley Down homes were sold to local authorities in the late 1940s. In the 1990s homes 1–3 were developed into private flats, and homes 4 and 5 were sold to Bristol City College.

By The editor and Phil Thomas