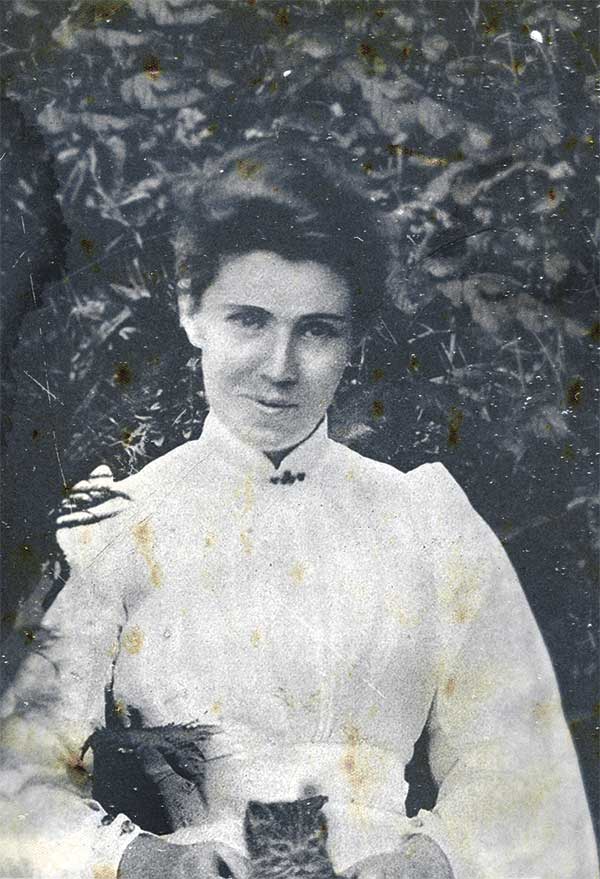 Amy Carmichael was born to a well-off Irish Presbyterian family. As a young woman, she felt called to missionary work after hearing Hudson Taylor speak at the Keswick Convention (an annual conference influenced in part by leaders of the Brethren). After brief stints in Japan and Sri Lanka, she was accepted into the Church of England Zenana Missionary Society. Carmichael set foot in India in 1895 and stayed there the remainder of her life.

From the difficult Tamil language to the caste system, Carmichael found service in India frustrating. But she persisted in her efforts to convert Indians to the Christian faith as she traveled to pray with and read the Bible aloud to village women. She was so dedicated that she rejected a suggestion to let women knit with pink wool while discussing the Bible. Her biographer, Elisabeth Elliot, noted, “To try to help God with pink fancywork was, she felt, plain unbelief.”

In 1901 Amy Carmichael’s life of ministry changed forever. A local Christian woman met a seven-year-old runaway named Preena and brought her to Carmichael. Preena was a temple prostitute, and Carmichael was moved to action when she heard her devastating story and those of countless other abused children. She created the Dohnavur Fellowship, a home where young orphans could escape the evils of temple prostitution. The children she rescued called her “Amma” (Mother).

Influenced by George Müller’s model of orphan care, Carmichael made Bible reading an educational focus—and, like Müller, didn’t ask for money, instead relying on prayer to bring practical relief. India outlawed temple prostitution in the 1940s, but today, Dohnavur continues as a thriving and safe home under the supervision of the Church of South India. It ministers to Indian children in need through an orphan home, hospital, farm, dairy, and two schools.

Carmichael taught the orphans that true faith is about belief in Jesus and not adherence to a particular denomination. When someone asked a Dohnavur boy if he was Anglican, Wesleyan, or Baptist, he responded, “I am Christian.”

After taking a terrible fall in 1931, Carmichael was mostly bedridden for the remainder of her life. She had already written several books—such as Things as They Are (1903), a description of Indian mission work—but now she turned to a full-time writing ministry until her death in India at the age of 83. She would ask herself five simple questions when writing each of her 35 books: “Is it true? Is it helpful? Is it kind? Is it necessary? Does it have the ‘seed of Eternity’ in it?” Clear, singular questions for a woman who adhered to a clear, singular faith.

Born in 1876 to devout Brethren parents, Harry Ironside was a young evangelist, even starting his own Sunday school ministry in 1886 at age 11. In 1889 revival preaching convinced Ironside that he was not born again, and he suspended his ministry for six months until he came to a point of accepting Christ in early 1890.

Ironside’s father had died when he was two, but he followed in the footsteps of his father when he started his own preaching ministry: first through the Salvation Army, then in association with evangelist George McPherson, and then through the Moody Bible Institute. He died while on a preaching tour of Brethren assemblies in New Zealand.

Ironside was known as a true Bible man. He wrote more than 60 books discussing the whole New Testament and all the Old Testament prophetic books, and his commentaries are still used. He was also instrumental in spreading dispensationalism (see "Caught up to meet Jesus in the clouds," pp. 34–36).

Not only did Ironside lack seminary or denominational education, he had only completed the eighth grade. He was simply a passionate student of the Scriptures and a man with an extraordinary gift for preaching the Word of God.

Ironside served as pastor at Moody Church in Chicago from 1930 to 1948 while continuing to preach throughout the country and eventually the world. A sympathetic biographer in 1944 called him the “unofficial archbishop of American fundamentalism.” Ironside was such a good fund-raiser that he joked once that his tombstone would say, “And the beggar died also” (Luke 16:22).

As head of Moody Church, Ironside held the office of pastor. To Brethren such a position wasn’t necessary due to the priesthood of all believers. Nevertheless he remained in fellowship with the group. When the 53-year-old struggled over accepting a pastoral call, he reported hearing Christ tell him to feed his lambs (John 21:15), despite his worry about his Brethren colleagues: “So I prayed again, and finally the Lord said to me, ’Feed My sheep. I’ll take care of the Brethren!’”

Born to Chinese Christian parents, Watchman Nee became a believer in Jesus at the age of 17. He soon felt called to Christian work and was mentored by British missionary Margaret Barber (1866–1930). Upon her death in 1930, Nee received her entire book collection, which included countless titles by well-known Brethren, including Darby and William Kelly (1821–1906).

Many of Nee’s theological ideas stemmed from the influence of these writers, including a commitment to Communion as the center of worship and the rejection of any difference between clergy and lay Christians.

He ran into conflict with the Exclusive Brethren, however, when he refused to isolate himself from other Christians, notably during the Lord’s Supper. After taking Communion with his mentor Theodore Austin-Sparks and other non-Brethren in the United Kingdom in 1933, Nee received a letter excommunicating him.

Nee once explained that after his first conversion to knowing Christ, in 1938 he experienced a second conversion: “to know His Body. To know Christ is only half of what the believers need. The believers also must know the Body of Christ. Christ is the head, and He is also the Body.” In the Brethren tradition, believers desired to meet together in the name of Jesus: no fussy order of service, just the Body together. Nee knew that he and other Christians needed more than Christ; they needed each other.

From 1956 to his death in 1972, Nee was imprisoned under the Chinese Communist regime. His grandniece recalled that after his death, the prison guards found a piece of paper under Nee’s pillow: “Christ is the Son of God who died for the redemption of sinners and resurrected after three days. This is the greatest truth in the universe. I die because of my belief in Christ. Watchman Nee.”

Frederick Fyvie Bruce—the son of a Plymouth Brethren preacher—was a Scottish biblical scholar. Although he espoused close ties with the Open Brethren throughout his life, he held some views that differed from theirs, including never adhering to a particular dispensationalist theology and encouraging women to take a place in public ministry.

However in his first and most famous book, New Testament Documents: Are They Reliable? (1943), Bruce clearly supported the Brethren’s most solidly held commitment: the reliability of the Scriptures and their total impact on all of life. In 2006 Christianity Today called this one of the 50 books that had most shaped evangelicalism.

In his 1946 article, “What Do We Mean by Biblical Inspiration?,” Bruce quoted Scottish minister Robertson Smith to describe his commitment to sola scriptura:

If I am asked why I receive Scripture as the Word of God and as the only perfect rule of faith and life, I answer with all the fathers of the Protestant Church, “Because the Bible is the only record of the redeeming love of God, because in the Bible alone I find God drawing near to man in Christ Jesus, and declaring to us, in Him, His will for our salvation.”

For Bruce the Bible was the only place a Christian could view the whole picture of redemption—from the multiplication of Abraham’s descendants to the disobedience of the roving Israelites to the promises incarnated in Jesus Christ. Bruce dedicated his life’s work to proving the Bible’s historical reliability so that it could provide spiritual transformation in a sinner’s heart.

Patricia St. John was born to Brethren parents, Harold and Ella, shortly after they returned to England from serving as missionaries in Brazil. F. F. Bruce called Harold St. John “The Maestro” because of his biblical knowledge, and evangelist Eric Hutchings wrote of him:

He above all others . . . inspired me to get down to a detailed study of the Bible, to seek the plain and obvious meanings of the words. . . . By this sane, prayerful approach, the true typical teaching of Scripture emerged.

Like her parents Patricia felt called to missionary work, and like her father she was a dedicated student of the Bible. She served as a nurse alongside her physician brother in Morocco both during and after World War II. In total she spent 27 years as a medical missionary there, five of them in a walled Muslim village in the mountains. She used only her Bible to share her faith through Bible studies and prayer meetings—there were no clergymen or church services to rely on. In fact she was the only Westerner and Christian in the whole village.

In addition to her medical and mission work, Patricia wrote over 25 books, including biographies, poetry, and Christian stories for children. The most famous, Treasures of the Snow (1950), is still in print and has been turned into a film, a stage play, and even a Japanese anime series! Another well-known book, Twice Freed (1987), imagines the story of Onesimus from the biblical book of Philemon. In her autobiography Patricia left us an indelible testimony to her trust in Jesus’s grace in her poem “The Alchemist”:

He seeks no second site on which to build,

But on the old foundation, stone by stone,

Fashions a stronger temple of His own.

Young missionary Jim Elliot and four Christian friends felt called to evangelize the Huaorani people in the jungles of Ecuador. After a handful of friendly encounters, the Huaorani killed the missionaries in January 1956. Jim’s wife, Elisabeth, went on to share Christ with the Huaorani and write two books about Jim’s life and death. Elisabeth would live almost six decades more, during which she wrote many additional books and became a well-known speaker, professor, and radio host.

Jim was raised among Brethren in Oregon. After he and Elisabeth met at Wheaton College and married, she too joined the Brethren. (In 1970 she would be confirmed as an Episcopalian along with her second husband, Addison Leitch.) Jim’s father was a traveling preacher, holding the Brethren belief that being a pastor is a gift, not an office; Jim was raised to believe he, too, could be a minister of the gospel, even in the jungles of Ecuador.

In Jim Elliot’s “Resurrection Sermon” given in 1951, five years before his death, he addressed the power of Scripture:

For the Elliots, an individual’s Christian experience was important but not enduring. The story the Scriptures tell is lasting—even beyond the mortal life of a sacrificial believer. CH

Jennifer Boardman is a freelance writer and editor. She holds a master of theological studies from Bethel Seminary with a concentration in Christian history

the readers and our editors
Show more
Issue 128