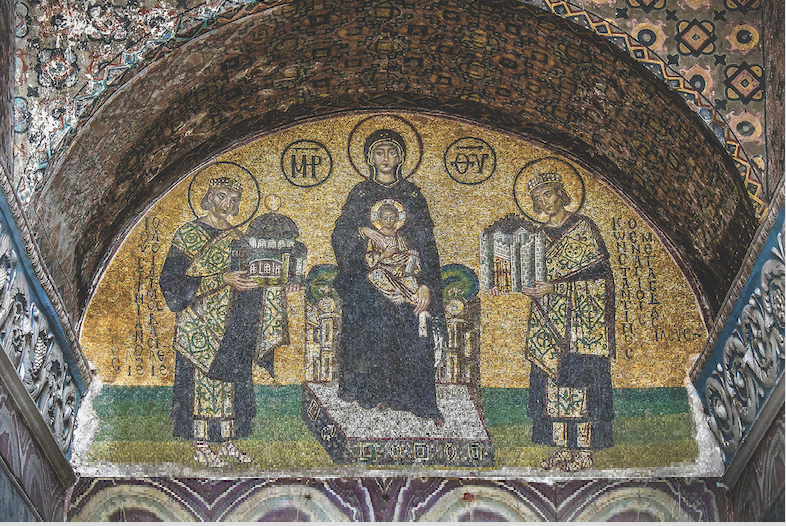 In the southwest vestibule of Hagia Sophia in Con­stantinople (now Istanbul, Turkey), a marvelous mosaic survives of two imperial Byzantine rulers whom the Byzantine church considered integral to the public expression of Christianity in the Roman world.

An enthroned Virgin Mary holds a young Jesus on her lap, flanked by emperors Justinian (482–565) and Constantine the Great (c. 272–337). Constantine holds a model of a walled city representing Constantinople, the city he dedicated in his name, while Justinian offers to the Virgin a miniature version of Hagia Sophia, the landmark church he constructed.

For Orthodox Christianity Constantine has al­ways been the example par excellence of Christian imperial civic engagement: defending Orthodox dogma and practice, making philanthropic offerings reflective of biblical principles, and practicing personal piety, however imperfectly he did so.

Constantine’s support of Christianity and his eventual deathbed baptism provided the paradigm for a long history of many Orthodox leaders—including his imperial successors such as Justinian—professing Christian faith and connecting it with their civic rule. The Byzantine imperial coronation ceremony exemplified this connection, taking place in both the Hippodrome (a very public, civic space) and the main church of Constantinople, Hagia Sophia, where the church’s patriarch blessed the emperor’s crown.

Medieval nations that came within the political and religious orbit of Byzantium adopted nearly wholesale this very public role of imperial authority imbued with Christian religious symbols and ideals. Beginning with the Bulgarians, followed by the Rus’ (first in Kiev and later in Moscow), and culminating in the fourteenth-century Serbian Empire, Orthodox Christian motifs were central to political power and influence. It is not surprising that the Serbian Orthodox Church canonized several Serbian rulers from the thirteenth and fourteenth centuries—reflecting the very close association of Serbian national sovereignty with Orthodoxy.

Civic engagement by Orthodox rulers could take several forms. One, in fact, was martyrdom. During the dynastic struggles that followed the death of Prince Vladimir of Kiev (c. 958–1015), Svjatopolk (c. 980–1019) killed Vladimir’s sons, his own half-brothers Boris and Gleb, around 1019. About a hundred years later, the Russian Primary Chronicle recorded the murder of the two brothers at the hands of Svjatopolk.

The exact details of their deaths are wrapped in hagiographic motifs and elude historians. However, Russian Orthodox tradition quickly identified them as saints and martyrs—not so much as martyrs in the traditional sense of dying for one’s faith, but as Christians refusing to match evil with evil.

The brothers would not stoop to murder in the quest for singular control of their father’s territory as Svjatopolk had. Known in the Orthodox Church as “passion bearers,” Boris and Gleb reflect an attitude of martyric witness, in which one accepts suffering to prevent the suffering of others as a Christian and civic duty.

More often Orthodox royal civic engagement took the form of a ruler defending the Orthodox way of life. This includes Byzantine empresses such as Irene (c. 752–803) and Theodora (c. 815–c. 867) who defied their husbands’ policy of iconoclasm.

Another famous defender of Orthodoxy was Alexander Nevsky (1221–1263), a beloved princely saint in the Slavic Orthodox tradition. Situated some 350 miles northwest of Moscow, Novgorod became an important principality in the thirteenth century. As prince of Novgorod, Nevsky faced the Teutonic Knights and Swedes from the north and west, along with the Mongols from the east. His defense of Novgorod was inspired by the fear of devastation, slavery, and loss of independence that inevitably comes with war; it also had a strong religious undertone, fearing forced Catholicism and Germanization that had already accompanied Teutonic expansion in Estonia, Latvia, and Lithuania.

After defeating the Teutonic and Swedish threat, Nevsky turned his attention to the Mongols. His response to their aggression was to recognize Mongol authority and cooperate. His humble stance with respect to the Mongol khan and his defiant military defense of Novgorod from Western aggression allowed for the preservation of Orthodox Christian identity in Novgorod and led to his canonization as a saint by the Russian Orthodox Church.

Some social and political elites, hailing from leadership positions in both church and state, used their status and resources to help alleviate the suffering of others. Basil the Great (330–379), bishop of the city of Caesarea in Cappadocia, established an impressive organization of social services that included a hospital, a homeless shelter, and a hospice.

In the seventh century, the bishop of Alexandria (Egypt), John (c. 552–c. 616), known lovingly as “the almsgiver,” focused his episcopal activities on alleviating the suffering of the poor in the city. A century later Philaretos the Merciful (702–792), a wealthy farmer in northern Asia Minor, gave away nearly all of his family’s wealth to the poor (thus bringing his own family to poverty) as part of his Christian civic responsibility.

Much closer to our own day, one of Russian Orthodoxy’s most celebrated philanthropists—and martyrs—was Grand Duchess Elizabeth Feodorovna of Russia (1864–1918). The granddaughter of Queen Victoria of Great Britain, Elizabeth was married to Grand Duke Sergei Alexandrovich of Russia (1857–1905), the fifth son of Emperor Alexander II of Russia. Raised Lutheran and a member of the house of the Grand Duchy of Hesse, Elizabeth converted to Russian Orthodoxy much to the dismay of many of her family members.

Following her husband’s 1905 assassination, Elizabeth sold her possessions and opened the convent of Saints Martha and Mary in Moscow in 1909. Under her direction as abbess, the convent provided needed assistance to the poor of the city, especially orphans. Elizabeth was murdered by the Bolsheviks in 1918 and canonized as a saint in 1992 by the Russian Orthodox Church.

During World War II, Orthodox leadership in giving aid to those in need surfaced in a dramatic fashion. With the German occupation of Greece starting in 1941, the Nazis began a systematic deportation of Jews from Greece. Given the collapse of the legitimate Greek government, Archbishop Damaskinos of Athens (1891–1949) became one of several key individuals who used their office and influence as best they could to represent the Greek people in the face of the occupiers.

In a letter dated March 23, 1943, Archbishop Damaskinos publicly denounced the deportation of Jews: “Our Holy Religion does not recognize any superior or inferior qualities based on race or religion, stating that: ‘there is neither Jew nor Greek’ and in this manner condemning any attempt to discriminate or create racial or religious differences.” Damaskinos put his words into action. He secured identity papers for 560 Jews by vouching for their “baptism.” The papers classified the Jews as Christian Greeks. The archbishop even ordered his priests to tell their congregations to help the Jews.

In France, Russian noblewoman Maria Skobtsova (1891–1945) played a similar role. Skobtsova and her husband moved to Paris in 1923; after her marriage fell apart in the early 1930s, Skobtsova took vows as a nun with the explicit guarantee that she would not have to move into a convent. She turned her household into a place to assist the poor and refugees and also to hold theological consultations. Ultimately she assisted many French Jews in avoiding deportation and death, herself dying in the gas chambers of Ravensbrück concentration camp.

Against these images of royal and aristocratic saints and church leaders, Orthodoxy juxtaposed the archetype of the holy man and woman who impacted society either through their self-imposed exile from the cares of worldly life (pp. 12–14) or through direct engagement with society in the midst of public life. A particular manifestation of this role in the Orthodox tradition was that of the holy fool. One of these, Daniel the Stylite (c. 409–493), took up residence on a pillar located some nine miles north of Constantinople on the Bosporos, the strait of water separating Europe from Asia. (The pillar was tall enough that when a priest came to bring the Eucharist to Daniel, he had to climb a ladder!) On more than one occasion, Daniel offered advice to the Byzantine emperor in Constantinople and directly served as a mediator between Emperor Leo I (c. 401–474, emperor 457–474) and Gabuzes, king of Lazika.

A century later, from the bustling streets of sixth-century Emesa (modern day Homs in Syria), Symeon the Holy Fool (522–588) challenged the norms of urban life through his absurd and often obnoxious activities—dragging a dead dog, turning out the lights in church, overturning tables, and throwing nuts at people; yet he was also renowned for assistance to the poor and sick, and miracles were attributed to him. Much later in St. Petersburg, Russia, the widow Xenia Grigorievna Petrova (c. 1719–c. 1803) took up a similar mantle of the holy fool after the death of her husband—walking the streets of the city, dressed in her husband’s old army uniform, praying for many people (especially children), assisting the poor, and challenging the values and accepted norms of urban life in view of the radical Christian call for justice and truth.

Orthodox Christianity’s long history of close association between church and society includes many other stories like these—from those in civil and ecclesiastical leadership roles to simple Christians seeking to put Christ’s message of social engagement into practice. This complex tradition still informs Orthodox Christians today of their responsibility for bringing the Christian message into the public sphere. Individual Christians may not build cities or churches, but we can still refuse to match evil with evil. CH