LUTHER’S TEACHINGS SPREAD like wildfire in the 1520s throughout Europe, attracting sympathetic, enthusiastic readers. From 1523 on they also created martyrs; both civil and religious authorities responded with violence to the threat to religious stability.

These early martyrs were not yet known as “Protestants,” a term first used in 1529 for German princes who protested an imperial order to stop making religious changes. Catholic opponents called anyone sounding even remotely like Luther a “Lutheran.” The martyrs called themselves “evangelicals,” dying for a life-giving message of free grace in Christ. Thomas Bilney, burned at the stake in 1531 after earlier recanting, insisted he was not a “Lutheran,” although he had attacked typical Protestant targets such as the penitential system and devotion to saints.

The larger network of reform-minded people who found Luther’s ideas exciting and life-giving had this in common: they understood the Gospel to be the proclamation of God’s free forgiveness of sinners, based on Christ’s righteousness received by faith. This, in the famous words of the English martyr William Tyndale, “maketh a man’s heart glad, and maketh him sing, dance, and leap for joy.”

This experience of joyful assurance was the spiritual heart of what would become Protestantism. But it was not confined to Protestantism; many in the early sixteenth century shared it while staying loyal to the structures and traditions of medieval Catholicism. Typically these people were also deeply influenced by humanist reformers, particularly Erasmus of Rotterdam (1466–1536; see CH 115), whose gentle, refined, Christ-centered piety had spread throughout educated circles.

One of the most important of these “evangelical Catholics” was Venetian diplomat Gasparo Contarini (1483–1542). In a 1511 letter to friend and monk Tommaso Giustiniani, Contarini recounted how once, when he went to confession on Holy Saturday, his confessor assured him that God’s grace was enough to cover his sins and he did not need to worry about “doing enough” good works. For the rest of his life, Contarini lived by and promoted this message of God’s free forgiveness through faith in Jesus. When Luther began teaching something similar, Contarini did not find it particularly shocking, even if he differed with Luther on the details.

Contarini was, initially, not that unusual. The earliest Catholic writers against Luther consistently focused on Luther’s attack on traditional sacramental practices as his fundamental heresy. They did worry that Luther’s teaching on faith might lead to neglecting good works, but they did not at first see it as a blatant contradiction to Catholic teaching.

Soon, in much of northern Europe, rulers and city councils moved to reform their territories along lines proclaimed by the “evangelicals.” That message soon became institutionalized as “Protestantism,” a new state religion with its own doctrines, structures, and worship practices. In France, Italy, and Spain, on the other hand, people sympathetic to evangelical ideas remained institutionally Catholic through the middle of the century.

Marguerite of Navarre (1492–1549), sister of King Francis I of France and wife of King Henry II of Navarre, was a prime example of an evangelical Catholic. Theologians of the University of Paris condemned as heretical her Mirror of the Sinful Soul (1531), and one of her critics supposedly said that she should be tied in a sack and thrown into the Seine. (The future Queen Elizabeth I of England, on the other hand, made an English translation of the book when she was only 11!)

Mirror shows the influence of Luther and other evangelical authors and combines language about faith and forgiveness with feminine imagery:

My soul, poor, ignorant, and powerless

Feels itself in you rich, wise, and mighty,

For you have written in her heart the document

Of your Spirit and holy Word,

Giving her faith to receive that Word,

Which has made her conceive your Son. …

Thus you assure her that she is the Mother

Of your Son, of whom you are the only Father.

The children and the inquisitor

Marguerite corresponded with French-speaking Protestants such as John Calvin and abbess-turned-activist Marie Dentière (c. 1495–1561); a number of the French evangelicals she encouraged were eventually executed as heretics. But as sister and wife to kings, she herself was too powerful to touch and perhaps helped hold off civil war between Protestants and Catholics.

One of Marguerite’s more polemical plays, The Inquisitor (1536), features a rigid theologian interrogating a group of children who may represent the evangelical theologians she had patronized but frequently been unable to save. The children confound the inquisitor with their simple faith and their knowledge of Scripture, and at the end, everyone exits joyfully singing a French psalm. Marguerite herself exited this life in good Catholic fashion in 1549 with a Franciscan priest holding a crucifix to her lips, after she received the last rites and shouted the name of Jesus three times.

Meanwhile, to the south in Spain, Erasmus’s influence had led to the formation of small groups of spiritually serious Christians who studied Scripture. Spanish Catholicism’s level of internal zeal for reform was great, but Spain’s was a highly authoritarian society: the powerful Spanish Inquisition (under the direct control of the monarchs rather than of the pope) suppressed anything remotely smacking of heresy. The appeal of Protestantism was small, and the little groups of “Lutherans” authorities uncovered generally insisted that they were not “Lutherans” at all.

The Inquisition uncovered and destroyed the most important such group in the 1550s in Seville. Its prestigious and popular preacher, Constantino Ponce de la Fuente (1502–1560), attracted suspicion. Though he was careful to avoid contradiction of Catholic teaching, he emphasized faith in Christ without mentioning important Catholic doctrines such as transubstantiation, devotion to the saints, and the penitential system.

Ponce de la Fuente died in prison, without being brought to trial or condemned as a heretic. His most important book, The Confession of a Sinner, was published by French Protestants after his death, together with a preface claiming him as a closet Protestant. Allegedly the inquisitors had found a secret stash of Protestant writings in his house, but the authenticity of the story is questionable.

Given Spain’s repressive atmosphere, it’s not surprising that the most influential Spanish evangelical, Juan de Valdés (c. 1500–1541), spent his theologically productive years in Italy—mostly Naples, outside the scope of the Inquisition. Like Erasmus and other humanist evangelicals, Valdés focused on a practical piety based on trust in Christ’s mercy rather than on arguing the fine points of doctrine. He demonstrated the possibility of holding to evangelical faith without going into schism from the traditional structures of the church.

Valdés had an immense influence among upper-class Italian spiritual seekers such as the two aristocratic sisters Vittoria Colonna (1492–1547) and Giulia Gonzaga (1513–1566). Through Colonna “Valdesian” spirituality became an important part of the intellectual and cultural atmosphere of midcentury Italy. Others influenced by Valdés included theologian and reformer Peter Martyr Vermigli (1499–1562; see CH 118) and Bernardino Ochino (1487–1564), head of the Capuchin Order. They intersected with the most prominent group of Catholic evangelicals in the sixteenth century, the spirituali of northern Italy, who included Contarini. This group represented the best hope evangelical piety had of gaining a stable place within Catholicism.

From 1535 to 1537, Pope Paul III appointed several new cardinals he hoped would spearhead reform within the church: Contarini; English exile Reginald Pole; Bishop of Carpentras (near Geneva) Jacopo Sadoleto; and Gian Pietro Carafa (see “Remaking the world,” pp. 40–43). These new cardinals, along with a few older hands, were tasked with drawing up a document laying out necessary reforms.

The resulting Consilium de Emendanda Ecclesia (Counsel on Reforming the Church, 1536) pulled no punches: it called the overblown and worldly papacy the root of church corruption. Its recommendations would have seriously harmed the papacy’s financial and political resources, and Pope Paul III did not follow through. But in the years following, Contarini, Pole, and Girolamo Seripando (general of the Augustinian Order) all sympathized with Protestant teaching on justification even while condemning Protestants for splitting from the church and for rejecting Catholic teaching on the sacraments.

A high point of evangelical influence came in 1541: Contarini was sent to Regensburg as papal legate to oversee a dialogue between Catholic and Protestant theologians designed to avert war within the Holy Roman Empire. Contarini did not himself negotiate with Martin Bucer and Philip Melanchthon, but the negotiators reported back to him, and he had authority from the pope to confirm or overrule their agreements. The dialogue did reach agreement on the central issue of justification, and those on both sides who longed for unity rejoiced.

However Contarini refused to compromise Catholic teaching on the Eucharist, insisting that the language of transubstantiation had to occur in the document to rule out what he saw as heretical views of more radical Protestants. Negotiations broke down. Then both Luther and the pope refused to accept the groundbreaking agreement on justification. Until his death in 1542, Contarini strove to convince his fellow Catholics that the compromise position he had approved was orthodox.

Regensburg’s doctrine of “double justification” was the most precise doctrinal statement evangelical Catholics produced. It held (uncontroversially) that initial justification was by faith alone, but it also insisted on the necessity of good works as a partial cause of final acceptance by God; at the point of death, however, the good fruit produced in us by the Holy Spirit will not suffice. Thus in the end, even the holiest believer must (as Luther insisted) rely on the merits of Christ. The Council of Trent, on the other hand, insisted that the work done in us by the Holy Spirit is enough to make us acceptable to God.

The failure of Regensburg ended the relatively conciliatory policy of Contarini and Pole. Now the initiative passed to their fellow cardinal, Carafa. To him reform meant tightening moral and doctrinal standards, condemning anything that smacked of Protestantism, and allowing heretics no loopholes. In 1542 Pope Paul III established a Roman Inquisition to investigate and try heresy, witchcraft, and other “religious” crimes and made Carafa one of the inquisitors-general.

Among its first targets were prominent Italian evangelicals such as Vermigli and Ochino, whose teachings sounded less and less distinguishable from those “heretics” north of the Alps. Both fled to Protestant territories and broke with Catholicism. Those remaining in Italy had to watch their step; several more radical evangelicals were executed, including an associate of Juan de Valdés.

Cardinal Pole, the most prominent evangelical in Italy after Contarini’s death, was nearly elected pope in 1549–50, probably the last chance for the evangelical movement. Five years later Carafa became pope as Paul IV, and the crackdown on anything looking remotely like Protestantism intensified. Europe descended into a century of brutal religious conflict, with each side seeing the other as enemy of the Gospel.

A union of faith and allegiance

Over 400 years later (2005), the preacher to the papal household (an advisor to the pope) would remark ruefully that “the great majority of Catholics have lived entire lives without having ever heard a direct announcement of gratuitous justification by faith.” While much attention has been paid to official ecumenical efforts, perhaps more significant in recent decades is the rebirth of an evangelical spirituality within Catholicism.

To Protestants committed to justification by faith alone, this modern renewal may seem too loose and undefined. But Contarini, Marguerite, Ponce de la Fuente, and others who longed for a union of evangelical faith and Catholic allegiance in the sixteenth century would, I think, be pleased. Perhaps the inquisitor can learn to sing with the children after all. CH 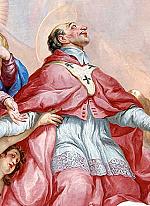