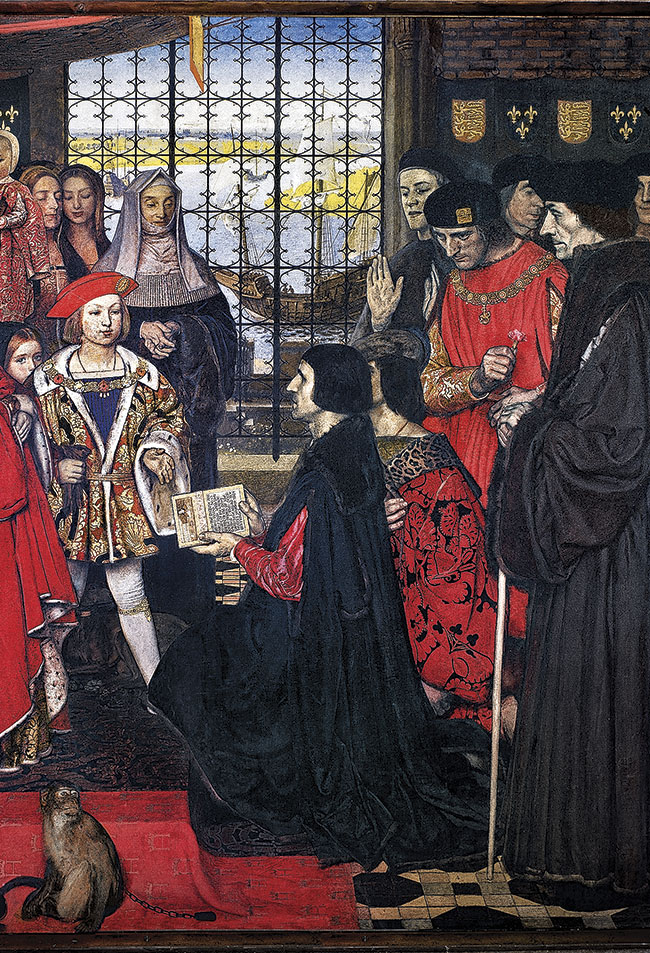 More is a man of an angel’s wit and singular learning. I know not his fellow . . . a man of marvelous mirth and pastimes, and sometime of as sad gravity. A man for all seasons.— Robert Whittington, 1520

Thomas More (1478–1535) was a leading English lawyer, judge, author, statesman, and politician, sometime historian and philosopher, and well-known Christian humanist. When he was a young page in the household of the archbishop of Canterbury, John Morton (c. 1420–1500), his employer noted that the intelligent, promising boy would be a “marvelous man.”

More’s close friendship with Erasmus began in 1499 when More was a student and lasted until his death. In 1519 Erasmus wrote of his friend: “Friendship he seems born and designed for; no one is more open-hearted in making friends or more tenacious in keeping them.”

Erasmus’s zeal for reviving and promoting classical Greek played a role in their friendship; More championed the teaching of Greek in England. Through Erasmus, More made important connections with northern Christian humanists. At the same time, More influenced his older colleague through his distinctive personality, ironic wit, political acumen, and humanist commitment.

More remained one of the earliest public supporters of Erasmus, consistently denying that the Protestant Reformation developed out of Erasmus’s writings. For his part Erasmus defended his friend after his death as having a character “more pure than any snow” and wrote that More’s genius was “such as England never had and never again will.”

Folly and a nowhere man

In the early years of their friendship, More and Erasmus shared an interest in exposing the follies and abuses of contemporary life, especially religious practice. Erasmus’s Praise of Folly (1511) was dedicated to More, and its latinized Greek title, Moriae encomium, was a pun. Erasmus wrote the book while staying in More’s home and asserted that More both came up with the title and motivated him to publish it.

In turn Erasmus influenced More to write his most enduring work, Utopia (1516). Though the title is usually translated literally as “No-Where,” More later clarified that he meant “a place of felicity.” Erasmus saw Utopia through its first publication in 1516; an early example of utopian/dystopian fiction, it influenced Tommaso Campanella’s The City of the Sun (1623), Francis Bacon’s New Atlantis (1626), and Voltaire’s Candide (1759). More left unfinished History of King Richard III, an attack on royal tyranny and an influence on Shakespeare’s Richard III. He also wrote treatises on the passion of Christ and, as he awaited execution, the agony of Christ.

More’s inflexible defense of Roman Catholicism eventually placed him in an untenable position. More believed that the ongoing reformations were dangerous both to the faith and to social stability. When Henry VIII positioned himself as the champion of Catholic faith, More served him as lord chancellor from 1529 to 1532.

But when Henry made greater claims of personal spiritual authority, matters came to a tragic turning point. More’s opposition to the annulment of Henry’s marriage and subsequent remarriage enraged the king; when More refused to take the Oath of Supremacy, the king declared him guilty of treason and had him executed in 1535. At his death More reportedly said, “I die the King’s good servant, and God’s first.” Erasmus is said to have felt the loss deeply. Grief may have even contributed to his surprising death less than a year later.

Roman Catholics canonized More as a martyr in 1935, and Anglicans listed him as a martyr of the Reformation in 1980. He gained further fame in the 1960s with the appearance of Robert Bolt’s play A Man for All Seasons (1960) and the 1966 Oscar-winning movie version.