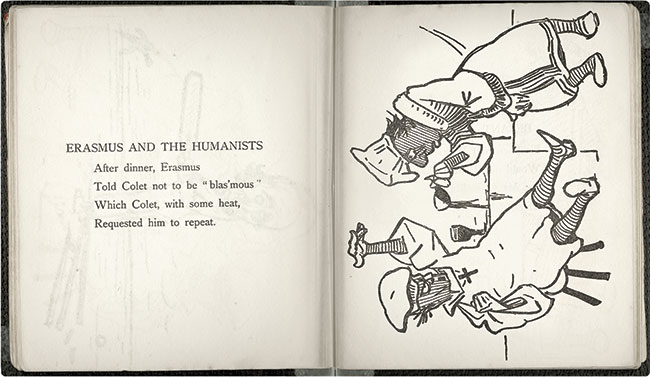 Erasmus had the first “bestseller” of the age of printing; Praise of Folly appeared in over 600 editions and the Colloquies in over 300. By the 1530s as much as 20 percent of all books published carried Erasmus’s byline. His satirical writings did suffer satire’s common fate: many people took them as serious historical narratives and statements of fact. As a result his fictional accounts of medieval Catholicism, exaggerated for literary effect, deeply influenced the post-Reformation English narrative of the pre-Reformation Catholic world.

The most famous quote attributed to Erasmus is usually rendered—on websites, posters, mugs, totebags, and the like—as “When I get a little money, I buy books; and if any is left, I buy food and clothes.” What he actually said, in an April 1500 letter to his friend and patron Jacob Batt, was, “The first thing I shall do, as soon as the money arrives, is to buy some Greek authors; and after that I shall buy clothes.”

In 1523 Erasmus wrote to a friend that the Franciscans were complaining that he had “laid the egg that Luther hatched.” Erasmus rejected this, writing that he had “laid a hen’s egg: Luther hatched a bird of quite different breed.” Nevertheless the saying took on a life of its own, quoted for generations by those who disapproved of Luther’s reforms and those who welcomed them. In 1534 Nicholas Herborn, head of the German Franciscans, elaborated that “Erasmus is Luther’s father; he laid the eggs and Luther hatched out the chicks.”

A proverb a day…

Erasmus’s Adages was first published in 1500. By 1536 he had collected, edited, and commented on more than 4,100 proverbs and sayings. Here are a few:

• On friendship: “Among friends all things should be in common.”

• On choosing the right parents: “One ought to be born a king or a fool.”

• On fretting: “Let not care corrode and gnaw your heart.”

• On helping others: “Help those who are willing to receive instruction and help those who try but have not strength.”

• On persistence: “When engaged in a wearying task, persist to the end.”

• On useless argument: “Arguing against what is clear and self-evident is like denying that the sun shines at mid-day.”

• On knowing one’s limits: “The shoemaker should not go beyond his last.”

• On exceptional perception: “In the land of the blind, the one-eyed man is king.”

• On effort: “More haste, less speed” and “God helps those who help themselves.”

Erasmus did not like jokes in sermons (although in his 1535 handbook Ecclesiastes: On the Art of Preaching, he repeated some as examples of what not to do). If preachers insist on telling jokes and stories, he said, they should take them not from bawdy medieval tales but from “ancient” sources; they should use them “sparingly” and apologetically; and they should not simply aim to get a laugh, but to “render most pleasant to [the] audience that which is most wholesome.”

More things than you might think are named after Erasmus today. The Praemium Erasmianum Foundation, a Dutch cultural organization founded in 1958 to strengthen the humanities in Europe, awards a yearly Erasmus Prize. The journal First Things has sponsored an annual Erasmus Lecture since 1985. The European Union’s Erasmus Mundus program sponsors scholarships and courses for non-European Union residents, and its Erasmus+ Programme supports student exchanges for EU residents to study abroad.

Erasmus University in Erasmus’s hometown of Rotterdam opened in 1913 (Rotterdam has also named a bridge and a hospital after him). Finally, Erasmus Hall High School in Brooklyn—one of the United States’ oldest schools—opened in 1786 as a private academy. Founding donors included John Jay, Alexander Hamilton, and Aaron Burr.

Erasmus on the Bible

“I would to God that the plowman would sing a text of the Scripture at his plow and that the weaver would hum them to the tune of his shuttle. . . . I wish that the traveler would expel the weariness of his journey with this pastime. And, to be brief, I wish that all communication of the Christian would be of the Scriptures.”—Paraclesis (1516) CH

Thanks to Paul Michelson of Huntington University for submitting “Bestseller list,” “A proverb a day,” and “Erasmus on the Bible.” Read his article on Erasmus and Thomas More on p. 32.

Sara Campbell and the editors 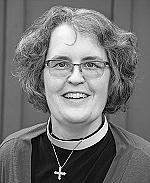 Getting to know Erasmus