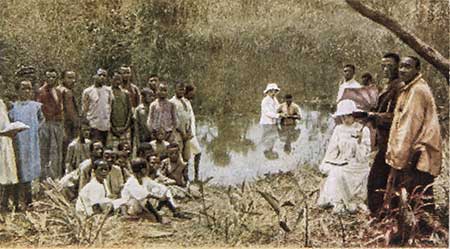 A baptism in the Congo

“Young man, sit down! When God pleases to convert the heathen, he will do it without your aid or mine!” With this exclamation an older British Baptist pastor reportedly silenced William Carey’s missions plea at a meeting in the late eighteenth century.

Whether the conversation really happened or not, most Protestants of the time did not prioritize missions. But Carey (1761–1834), a bivocational cobbler and minister, had other ideas; his slogan was “Expect great things from God—attempt great things for God!” In his workshop he hung a large map of the world and wrote information on it about peoples who had not heard the Gospel. In 1792 Carey and his friends gathered in Kettering, England, and formed the Baptist Missionary Society. The next year Carey and his family set sail for India, where he served for more than 40 years. The modern missionary movement had begun.

Carey’s organization, modeled on the concept of the overseas trading company, introduced a new paradigm for mission work. Protestants soon formed dozens of similar societies. Advances in travel and trade meant new regions of the world were accessible—and people there needed to hear the Gospel. Baptists, captivated by this vision and by stories from missionaries like Carey, became ardent supporters of global missions.

“estimated by my merits”

Baptists in the United States have traditionally considered their first missionaries to be Adoniram (1788–1850) and Ann (1789–1826) Judson, who departed in 1812 (see p. 28). However African Americans had embarked on cross-cultural ministries even before official missionary societies were organized. Among them were escaped slaves protected by the British during the Revolutionary War, who feared re-enslavement after the American victory.

As early as 1782, pioneer African American pastor George Liele left the United States for Jamaica. Initially living as an indentured servant to pay for his family’s passage, Liele supported himself as a farmer and driver after regaining his freedom. He also continued his intense evangelistic efforts, writing by 1791, “I have baptized 400 in Jamaica.” Liele endured repeated imprisonments but never wavered from his missionary endeavors. Thousands of Jamaicans were eventually converted as a result of his ministry.

One of Liele’s early converts, David George (c. 1743–1810), accepted the Gospel as a freed man in Georgia and founded the first African American Baptist church. In 1782 he and others fled with British help to Nova Scotia, where George continued pastoral ministry despite persecution. Ten years later George and his family immigrated to Sierra Leone along with other former slaves. There he established the first-known Baptist presence in Africa and even convinced the Baptist Missionary Society to support his efforts for a time.

Other freed slaves migrated to Liberia. One, Lott Carey (1780–1828), helped found the Richmond African Missionary Society, which assisted with his passage to Liberia in 1821. He explained, “I wish to go to a country where I shall be estimated by my merits, and not my complexion; and I feel bound to labor for my suffering race.” The influential Carey established the first Baptist church in Liberia, which drew fellow immigrants as well as indigenous Liberians. Later an African American mission society was named in his memory.

Congregationalists created the first missionary society in the United States in 1810, and two years later the Judsons and Luther Rice (1783–1836) sailed to India under its auspices. Knowing that they would meet Baptist missionary William Carey upon their arrival, the trio studied what the Bible said about baptism. To their surprise they found themselves siding with the Baptist position and were baptized as adults on the journey.

They subsequently resigned from the Congregationalist board and lost financial backing. A shaken but determined Adoniram wrote, “Whether the Baptist churches in America will be compassionate about my situation, I know not.” While the Judsons established their mission in Burma, Rice returned to the United States in the hopes of enlisting Baptist support for their ministry. He traveled thousands of miles by horseback and stagecoach to make his plea to churches.

Thanks to Rice, in 1814 Baptists across the United States joined together for the first time to form the General Missionary Convention of the Baptist Denomination in the United States of America for Foreign Missions (commonly known as the Triennial Convention) to support the Judsons and others. American Baptists had rejected previous efforts to unite them, so this was significant. The cause of missions was a priority for Baptists across the country.

The Triennial Convention soon began sending domestic as well as foreign missionaries. Pioneer missionary John Mason Peck (1789–1858) arrived in Missouri Territory in 1817, explaining that “ever since I have thought upon the subject of missions, I have had my eye upon the people west of the Mississippi.”

He soon organized churches, Sunday schools, mission societies, and Bible societies, persevering despite a drop in funding and the opposition of antimissionary Baptists. Peck later helped organize the American Baptist Home Mission Society, with 150 home missionaries in the field by 1836. They served among Native Americans, frontier settlers, immigrants, African Americans, and others.

The debate about slavery that split the United States also divided Baptist missions advocates. Northern Baptist abolitionists and Southern Baptist slaveholders struggled for control of the Triennial Convention, which attempted to remain neutral. After the convention refused to appoint a Georgia slaveholder as a missionary, southerners pulled out and formed the Southern Baptist Convention in 1845. Again missions took priority: the SBC’s stated purpose was “for the propagation of the gospel,” and it quickly established foreign and domestic mission boards. Both Southern and Northern Baptists sent growing numbers of missionaries to China, India, West Africa, and other places.

Women had supported Baptist missions endeavors from their beginnings, praying for missionaries and giving small sums of money they were able to save. In fact a Baptist woman, Mary Webb (1779–1861), created the first female missionary society in the United States. Despite having suffered paralysis as a child which forced her into a wheelchair, the 21-year-old Webb organized women in Boston to “contribute their mite.” Other Baptist women formed similar societies. In South Carolina, for example, Heph-zibah Jenkins Townsend (1780–1847) led women to bake and sell bread to support missions work among the Catawba Indians.

These efforts multiplied in the second half of the nineteenth century as the idea of “woman’s work for woman” emerged among many Protestant denominations. Northern Baptist Helen Barrett Montgomery (see “Preachers, organizers, trailblazers,” pp. 36–40) explained the motivation:

Men were shut out from ministry [to women] by the iron bars of custom. . . . The missionary wife at best could give only a fragment of her strength and time to the work; then why not send out women to minister to the uncounted millions of women in non-Christian lands?

Among Southern Baptist women, Lottie Moon (1840–1912; see sidebar) was the most revered missionary of this era. Moon, a brilliant woman from a privileged background, spent nearly 40 years serving in China. She witnessed to thousands of people, pioneered ministry in new areas, and urged Southern Baptists to engage in missions. “I would I had a thousand lives,” Moon wrote, “that I might give them to . . . China.” Moon’s counterpart, Annie Armstrong (see “Preachers, organizers, trailblazers,” pp. 36–40), remained in the United States and encouraged missions support.

African American Baptist women also participated. Under the leadership of Nannie Helen Burroughs (see “Preachers, organizers, trailblazers,” pp. 36–40), the Women’s Convention was formed in 1900. It raised funds for missions, published missions material, and trained African American women for missions and ministry. Women such as Eliza Davis George (1879–1979) dedicated their lives to missionary service. George, a Texan, declared, “I believe my life’s work is not in America, but Africa, and that’s where I must go.” “Mother Eliza” spent more than 50 years in Liberia, leading a school where children learned the Bible alongside vocational skills like farming.

When the National Baptist Convention asked her to retire at age 65, George refused, believing that her ministry was not complete. She became the first African American woman to establish her own mission organization, the Elizabeth Native Interior Mission. In 1971, the year before George returned to the United States for good, a visitor wrote:

I met Mother George at the Evangelical Negro Industrial Mission deep in the bush at the age of 91. Her ministry was vast. She was almost blind. She walked with a walking stick. She had a larger tropical cancer on her leg, and she was still pressing the claims of Christ.

By the twentieth century, Baptist missionaries served on every inhabited continent in the world. They often evangelized, taught school, or worked in hospitals, although many mission institutions were turned over to nationals in the midcentury. Gradually justice ministries and church planting among unreached people became more popular.

By the century’s end, Southern Baptists sent more missionaries than any other American denomination. Some Baptist missionaries also served through interdenominational organizations or independently. Nearly all Baptist churches in America supported missions in some way, with many sending short-term mission teams. In addition Baptists in former mission fields became mobilizers and missionaries themselves as missions expanded “to everywhere and from everywhere.” In the two centuries since the first Baptist missionaries set sail, Baptists had proven themselves to be a truly global people. CH

Melody Maxwell is assistant professor of Christian studies at Howard Payne University and the author of two books on Baptist women, The Woman I Am and Torches in the Corridor.

Baptists wrestle with fundamentalism and liberalism

Black Baptists and white Baptists shared something important in the twentieth century: a penchant for splitting