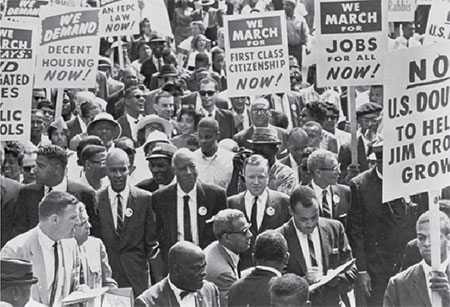 A famous joke: A Baptist was stranded on a remote island for 20 years. When rescuers finally got to him, they found he had built three structures. When they asked him about them, the man pointed to one building and said, “That’s my house.” “And over there?” the rescuers asked. “That’s my church,” the stranded man replied. “I’m Baptist and take my faith quite seriously.” “And over there? What is the third building?” the rescuers asked. “Oh,” said the man. “That’s where I used to go to church before the split.”

White and black Baptists in America generally worshiped together before the Civil War, because white slaveholders in the South feared to let blacks have their own churches, which might become centers of agitation for freedom. It was dangerous to let slaves read the story of Moses leading the Hebrew people out of bondage, slaveholders thought: they might take the Bible literally and interpret the Israelites’ redemption story as a promise of their own freedom. Where African Americans were permitted their own churches, a white preacher presided over the congregation.

Even so, by some estimates, when the white Southern Baptist Convention came into existence in 1845, there were more black than white Baptists in the South. Immediately after the Civil War, they demanded their own independent churches and began to form associations, mission societies, and in the 1890s the National Baptist Convention U.S.A., Inc. (NBCU). By 1900 it had become the largest black organization of any kind in America and remains so today.

Initially black Baptist schism occurred over organizational or sociological issues rather than theology. The 1915 split, for example, centered largely on control of the publishing company that produced Sunday school material and hymnbooks. But the racial turbulence of the 1950s and 60s led to significant political and religious schisms in black Baptist churches. Nearly a century after the abolition of slavery, a rift formed over how African Americans should pursue equality with whites.

“Shall gradualism be applied?”

Martin Luther King Jr.’s Dexter Avenue Baptist Church in Montgomery, Alabama, was affiliated with the NBCU. After Rosa Parks’s famous arrest on December 1, 1955, National Association for the Advancement of Colored People (NAACP) leaders, including Parks, met in King’s home. They called for the Montgomery bus boycott of 1956. Dexter Avenue Baptist served as the headquarters for organizing the protests against segregation in Montgomery’s city transit system.

In September of 1956, as the bus boycott continued, the NBCU held a symposium on civil rights at its annual meeting in Denver, debating “National Baptists Facing Integration: Shall gradualism be applied?” Gradualism is the idea that African Americans must be patient and move slowly toward equality with whites. Following the panel King denounced gradualism in a sermon; many at the convention responded enthusiastically. But NBCU president Joseph H. Jackson (1900–1990) was a gradualist, and he bristled at King’s growing popularity, allegedly responding, “We must not crown our heroes too quickly.” The New York Times would much later report him as saying: “The answer to racial confusion is the Bible,” which was something white Southern Baptists were also fond of saying.

Jackson had pastored the Olivet Baptist Church on the South Side of Chicago since 1941; by the time of his death, the church would boast over 20,000 members, double the membership when he became pastor. Until King and civil rights became a national phenomenon, Jackson had been the best-known and most influential black Baptist preacher in America, becoming president of the NBC in 1953 with King’s support.

Following Parks’s arrest Jackson at first favored the movement, sending money from the NBCU and from Olivet Baptist and even offering to purchase a bus to help transport African Americans who were boycotting the transit system. After the 1956 symposium, however, Jackson and King became bitter enemies. Some of King’s supporters even urged him to attempt to unseat Jackson from the presidency.

When Jackson’s fourth term as president of the NBCU expired, his supporters tried to keep him in office in violation of the four-term limit, and the issue landed in court where Jackson prevailed. King and other civil rights activists like Ralph Abernathy (1926–1990) threw their support to Gardner C. Taylor (1918–2015) of Brooklyn’s Concord Baptist Church of Christ. Taylor was a close friend of King; he would ultimately serve the church for years, author numerous books, and be named the “dean of American preaching” in 1980 by Time.

In many ways this debate was nothing new. Following the Civil War, some had favored separation from white Baptists, while others favored cooperation. In the early twentieth century, Booker T. Washington (1856–1915) and W. E. B. Du Bois (1868–1963) represented similar positions: Washington, like Jackson, was the gradualist, advocating economic training and opportunity rather than direct action to end segregation and discrimination. Du Bois, by contrast, would accept nothing short of complete equality in all spheres of life.

The NBCU exploded in controversy at its 1961 meeting in Kansas City. With both Jackson and Taylor claiming the presidency, the debate devolved into a violent melee in which pastor A. G. Wright from Detroit was knocked from the platform and rushed to the hospital with a severe head injury. He died the next morning.

Jackson emerged victorious once again, while blaming King for the violence. At Wright’s funeral Jackson referred to King as one of the “hoodlums and crooks in the pulpit today.” Taylor had initially pledged his support to Jackson, but soon he, King, Abernathy, and others bolted the NBCU and formed a separate denomination called the Progressive National Baptist Convention (PNBC).

While the black Baptist schism of 1961 was political, it was also a dispute about the proper role of the church in politics. White Baptists fought about politics too. But the white Southern Baptist controversy that erupted in 1979 was more clearly rooted in theology. It was arguably the most significant church schism of the twentieth century, given that it happened in America’s largest Protestant denomination, resulted in a complete turnover in power from moderates to conservatives, and had both theological and political consequences.

Conservative activists in the Southern Baptist Convention (SBC) had been pestering the moderate leadership since the 1920s, charging that the SBC’s seminary professors and denominational officials were theological liberals who believed in evolution. The conservative movement did not get much traction until preacher and theologian Paige Patterson (b. 1942) and Texas judge Paul Pressler (b. 1930) began to organize in the late 1970s; they brought education, prestige, and organizational prowess to the conservative cause.

Patterson and Pressler determined that if they could elect a conservative to the SBC presidency for 10 consecutive years, they could completely remake the boards of all SBC agencies and the six Southern Baptist seminaries. They recruited Memphis megachurch pastor Adrian Rogers (1931–2005) to stand as the conservative candidate for the SBC presidency in 1979, and he was elected. Moderates thought this was another one-off, much like conservative W. A. Criswell’s presidency a decade earlier (see “Preachers, organizers, trailblazers,” pp. 36–40). It wasn’t. The moderates never again won the presidency. By 1992 the conservatives controlled all agencies and seminaries.

Throughout the 1980s, as the controversy raged, the inerrancy of Scripture served as the conservative battle cry, building on the 1976 book The Battle for the Bible by Northern Baptist Harold Lindsell (1913–1998). Patterson, Pressler, and the many who joined them argued that moderate leaders either rejected inerrancy or were soft in its defense. This, they argued, would lead the SBC down the path toward theological liberalism, just as had happened in the Northern Baptist Convention in the early twentieth century.

Each year’s convention turned into an electoral battle as conservative and moderate constituencies rallied around opposing candidates. SBC annual conventions had formerly been perfunctory business meetings, featuring worship and fellowship among ”messengers” (delegates), many of whom were denominational employees. During the controversy the meetings morphed into highly contested events; before, 13,000 to 18,000 messengers might have shown up, but by 1985 in Dallas, roughly 45,000 attended.

In retrospect that 1985 convention served as the moderates’ last stand. Unable to break the conservatives’ six-year run of victories, the moderates found their cause beginning to decline and themselves systematically replaced by conservatives on boards and faculties.

That this all took place during the Reagan era gave momentum to the conservative cause; the entire South was flipping from solidly Democratic to almost uniformly Republican. Conservative political positions were often in play explicitly, most conspicuously around abortion. Following the Roe v. Wade decision of 1973, the Christian Life Commission, the SBC’s political and ethical agency, had taken a softly pro-choice stand. It shepherded a number of abortion resolutions through SBC annual meetings, speaking of abortion as a grave ethical matter, but almost always supporting it as an option when the life or mental health of the woman was at issue.

The ordination of women soon became an equally explosive issue. In 1993 Albert Mohler (b. 1959) became the first conservative president of Southern Baptist Seminary in Louisville. He formed a four-part test for faculty hiring: belief in inerrancy and opposition to abortion, homosexuality, and women’s ordination. Moderates were particularly outraged by the women’s ordination ban. A mass exodus followed, and the seminary faculty turned over almost completely. By the end of the decade, virtually no moderates were left on the faculty there or at the other five SBC seminaries.

In 1998 the SBC garnered front-page news in the New York Times and major coverage on secular TV news shows by adding to the SBC’s confession of faith a statement calling a wife’s submission to the headship of her husband the only biblically approved form of marriage. Two years later, with much less fanfare, conservatives added a clause officially rejecting women’s ordination.

Yet, even while taking a leadership role on the conservative side of America’s culture wars, Southern Baptist conservatives furthered the legacy of their moderate predecessors on race. In 1995 messengers voted overwhelmingly to adopt an apology for the denomination’s racist past and a call for racial reconciliation. The resolution had been carefully crafted by eight white and eight black SBC pastors and leaders, all with impeccably conservative credentials.

Among the roughly 47,000 SBC churches, between 3,000 and 4,000 of them are predominately African American in membership and leadership today, making the SBC among America’s most integrated denominations. But very few individual churches are integrated; this, of course, is true in the NBCU or any other black Baptist denomination as well. Black Baptists and white Baptists have shared much in common, including a penchant for twentieth-century schism. But they still share very few pews. CH

Barry Hankins is professor of history at Baylor University and the author of numerous books on evangelicalism and Baptists, including Baptists in America with Thomas Kidd as well as Uneasy in Babylon and God’s Rascal.

Here are some recommendations from CH editorial staff and this issue’s authors to help you understand the Baptist story.