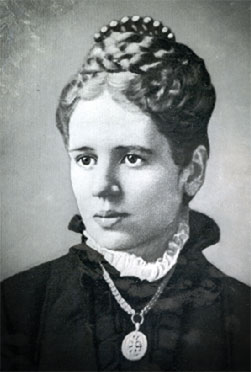 founded the Women’s Missionary Union (WMU) of the Southern Baptist Church in 1888 in conjunction with other women from 12 states—though establishing a national women’s organization for missions did not come without opposition from male Southern Baptist leaders. Armstrong was elected its first corresponding secretary.

Known for her slogan “Go forward!,” Armstrong wrote letters (over 18,000 in one year) and traveled tirelessly to raise support for missionaries. She refused to address crowds that included men, believing that the Bible prohibited it, but she used her influence to promote Bible and missions education, including the publication of educational materials for African American Baptist women and children. Under her leadership offerings and prayer weeks for both home and foreign missions were established. She never accepted a salary.

social reformer and preacher, dedicated time and resources to help women access education. She was the first woman to serve on the Rochester school board and helped start a local chapter of the Women’s Educational and Industrial Union with Susan B. Anthony. She also taught Sunday school at Lake Avenue Baptist Church for over 40 years, was a licensed Baptist minister, occasionally provided pulpit supply, and served as the first president of the Woman’s American Baptist Foreign Mission Society and the first woman president of the Northern Baptist Convention. Her president’s address in 1922 arguably helped keep the denomination from schism.

With fellow Baptist Lucy Peabody (1861–1949), Montgomery threw herself into the cause of evangelism in the ecumenical women’s missionary movement through the Central Committee on the United Study of Foreign Missions, which published no fewer than 37 textbooks for local mission societies. Montgomery authored six and translated the New Testament into everyday language, publishing the Centenary Translation in 1924.

served as the president of the North Carolina Woman’s Missionary Union from its beginning in 1886 until her death and also served several terms as national WMU president. She and Annie Armstrong disagreed over their roles; eventually Heck refused to serve as president until Armstrong stepped down as corresponding secretary.

Heck proved to be an incredibly strong president. She was instrumental in the founding of the Woman’s Missionary Union Training School in Louisville, Kentucky, established age-level mission education programs in local churches, spearheaded a major fund-raising campaign during the WMU’s twenty-fifth anniversary, wrote for numerous denominational publications, and authored the Woman’s Missionary Union hymn, “Come, Women, Wide Proclaim.” She became known in many Baptist circles, even delivering a speech at the Baptist World Alliance meeting in 1911.

After Heck’s death the minutes of the Foreign Mission Board included a tribute: “She exhibited . . . delicate feminine modesty and strong leadership. Many will be under the spell of her life and devote themselves to her ideals.” The WMU in North Carolina established an annual offering in her memory.

is best remembered as being pastor of First Baptist Church, Dallas, Texas—for 47 years! Truett originally wanted to study law, but at Whitewright Baptist Church, congregants discovered his oratorical and teaching gifts and ordained him in 1890. As Baylor University’s financial secretary, he raised $92,000 to help Baylor pay off its debts. Only then did he attend Baylor as a student.

Under his leadership First Baptist Church grew from 700 members to 7,800. Services were broadcast on the radio; Truett preached revivals around the nation and was appointed by Woodrow Wilson to preach to troops in Europe in 1918. He also served as president of the SBC and the Baptist World Alliance. Many of his sermons and addresses were published, and he preached one, “Baptists and Religious Liberty,” on the steps of the Capitol in Washington, DC, in 1920.

was converted at a revival meeting. His first church after seminary at Southern Baptist Theological Seminary was McKinney Avenue Baptist Church in Dallas. He left that church in 1907 to become the editor of the Baptist Standard, but then left that post in 1909 to pastor First Baptist Church, Fort Worth, which he did until his death. From 1935 through 1950, he also pastored Temple Baptist Church in Detroit, Michigan, traveling by train and plane and enlisting the help of others.

In the 1920s Norris emerged as a leader in the fundamentalist movement in the United States. His attacks on Baylor University and on denominational leaders cost his church its seats at the Baptist General Convention of Texas, and Norris eventually broke ties with the Southern Baptist Church (SBC) which he saw as too modernist. He founded a group of independent Baptists (later the World Baptist Fellowship), helped start the Fundamental Bible Baptist Institute, and published a fundamentalist newspaper.

Norris made enemies among conservative evangelicals, liberals, Catholics, and fundamentalists—and was indicted for burning his own church on two separate occasions, as well as for libel and murder. The last charge arose from his shooting Catholic lumberman Dexter Elliott Chipps in his church office in 1926; Chipps had stopped by to tell him to stop criticizing the Catholic mayor of Fort Worth. Norris escaped all but the libel charge, acquitted of murdering the unarmed Chipps on the grounds of self-defense, as Chipps had challenged him to a fight. Allegedly Norris called his wife after the shooting and told her, “I’ve just killed me a man.”

was a teacher, reformer, and leader in the National Baptist Convention (NBC). She wanted to teach in the District of Columbia, but the board of education would not hire her because of her race. Instead she found work in Philadelphia with the NBC’s paper, the Christian Banner. In 1900 Burroughs accepted a position with the Foreign Mission Board (FMB) of the NBC; she would work with the denomination for the remainder of her life.

Burroughs delivered one of her most famous addresses, “How the Sisters Are Hindered from Helping,” at the FMB’s annual meeting in 1900, lamenting the lack of opportunities for African American women to serve in Baptist churches. This led to the founding of the Women’s Convention (WC) auxiliary of the NBC. Burroughs served as its long-term corresponding secretary, traveling tirelessly to promote the cause and even addressing the first Baptist World Alliance meeting in London in 1905.

But Burroughs’s crowning achievement was founding a school for African American girls in Washington, DC, in 1909 with the support of the NBC and the WC. Burroughs became president of the National Training and Professional School for Women and Girls, a position she held until her death. A vocal supporter of civil rights, she invited Martin Luther King Jr. to speak to the WC (he accepted). She also spoke out against lynching and for suffrage. In 1964, three years after her death, the school renamed itself after her.

traveled, spoke, and advised the civil rights movement. Howard was a pastor, professor at Morehouse and Spelman, dean of the chapel at Howard University, pastor of the intentionally interracial Church for the Fellowship of All Peoples in San Francisco, and the first black dean of the chapel at Boston University. After the death of his first wife, Katie Kelley, he married Sue, who had trained as a teacher and musician at Oberlin College and already had a thriving lecture career. In 1935 they traveled to India and met Gandhi, a moment that committed them to nonviolence.

Howard credited his once-enslaved grandmother for a profound influence on his life, writing in Jesus and the Disinherited about her refusal to let him read Paul’s letters to her, “Always the white minister used as his text something from Paul. . . . I promised my Maker that if I ever learned to read and if freedom ever came, I would not read that part of the Bible.’”

became pastor of First Baptist Church, Dallas, Texas, following George Truett and served until 1995 (the church had only two pastors in 95 years!). He experienced conversion at a revival meeting at age 10 and felt called to ministry at 12; at 17, he was licensed to preach. (He would later earn advanced degrees including a PhD.) Under Criswell’s leadership FBC Dallas grew from 7,800 to over 25,000—one new member was the young Billy Graham. His over 4,000 sermons were broadcast on radio and television, and he preached through the entire Bible in his tenure. He also organized elaborate age-level ministries, a model that churches around the country would replicate.

Criswell was SBC president from 1968 to 1970 and significant in the denomination’s conservative resurgence. He wrote 54 books, including Why I Preach that the Bible Is Literally True (1969), and defended biblical inerrancy, premillennial dispensationalism, and, for a time, racial segregation.

a farmer and New Testament scholar from Georgia, witnessed racial tension and economic disparity from an early age. Hoping to make a difference in the lives of poor farmers, he studied agriculture at the University of Georgia. But he felt called to ministry and eventually earned a PhD in New Testament studies, was ordained, and pastored three rural churches before establishing Koinonia Farm in Georgia in 1942. At Koinonia inhabitants shared their resources, practiced pacifism, and treated all people as equal regardless of race or class. Violence and economic boycotts against Koinonia hindered its growth; the farm reincorporated as Koinonia Partners in 1968, and its low-cost, interest-free housing program eventually evolved into the nonprofit Habitat for Humanity.

Jordan’s translations of portions of the New Testament into the southern vernacular became known as the “Cotton Patch” series, and his translation of Matthew was turned into an off-Broadway musical, Cotton Patch Gospel.

preacher and activist, grew up in Mt. Sharon Baptist Church in Philadelphia, earned a degree in political science, and became a leader in the Student Nonviolent Coordinating Committee (SNCC). She spoke at mass meetings, trained field workers, and led a voter registration project in Selma, Alabama. She was arrested multiple times and once suffered a minor gunshot wound. At a 1962 prayer vigil in Georgia, Martin Luther King Jr. overheard Prathia Hall using the phrase “I have a dream” in prayer. He began to use it in his preaching and speeches. When SNCC abandoned its commitment to nonviolence and excluded white members in 1966, Hall left the organization.

Hall was one of the first African American women ordained by American Baptists. She earned an MDiv and a PhD, pastored her father’s church in Philadelphia, and taught Christian ethics, womanist theology, and African American religious history. In 1997 Ebony magazine recognized her as one of the “15 Greatest Black Women Preachers.” CH

Here are some recommendations from CH editorial staff and this issue’s authors to help you understand the Baptist story.

Medieval Mystics, Did you know?

In the twelfth century, renewal winds began to blow.