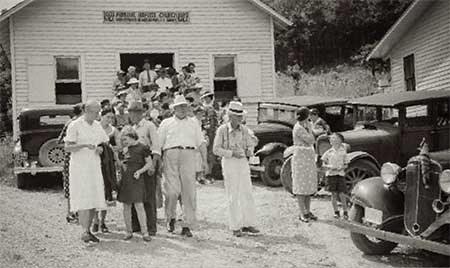 Primitive Baptists from the hills head to a river for a baptism.

Baptists in the United States entered the twentieth century at the top of their game. One of the country’s largest Protestant groups, they were heirs of religious awakenings across the previous century: camp meetings, seasonal revivals, and urban evangelistic crusades. Their missionary endeavors spanned the globe, and they maintained colleges and universities across the nation. The oft-ridiculed, sometimes-persecuted colonial sect had become a powerful fixture in American religious life.

free to unite, free to divide

Baptists “multiply by dividing,” so the saying goes.

They unite around the concept of a believers’ church composed of those who testify to an experience of God’s grace through Jesus Christ, symbolized by believers’ baptism. Yet corresponding emphases on congregational autonomy, the priesthood of all believers, and freedom of conscience, plus the Calvinist-Arminian divide, create the possibility of division over issues ranging from Scripture’s authority to the color of paint for the fellowship hall. As the twentieth century began, earlier schisms over slavery and the Civil War remained festering wounds, extended by the South’s Jim Crow segregation and the North’s growing passion for Social Gospel progressivism. Baptist pastor and Rochester Theological Seminary professor Walter Rauschenbusch (1861–1918) envisioned a Social Gospel movement by which Christ’s kingdom, “humanity organized according to the will of God,” would gradually transform individuals and society.

Meanwhile Baptist pastor William Miller’s 1840s claim that Christ’s second coming would soon occur had helped popularize the premillennialist idea that the Savior was on the verge of dramatically establishing a 1,000-year reign of peace. Jesus tarried but premillennialism became a major component of early fundamentalist belief and preaching.

These dueling perceptions set the stage for disputes. Though the 1910s booklet series The Fundamentals was actually conceived by a Presbyterian, its effects rippled through many denominations, including Baptists. Fueled by charismatic personalities, these controversies divided congregations and often spawned new Baptist coalitions.

Left-of-center Baptists understood themselves as “Christocentric liberals,” applying new discoveries in theology, philosophy, and science to Christian truth. They accepted biological evolution, historical-critical methods for biblical studies, the findings of modern sciences, the benevolence of the God revealed in Jesus, and the progressive goodness of human nature. In The Faith of Modernism (1924), Shailer Mathews (1863–1941), Baptist dean of the University of Chicago Divinity School, wrote,

Since all truth is God’s truth, Mathews and others argued, Christians need not fear new knowledge and scientific discoveries.

Augustus H. Strong (1836–1921), another longtime professor at Rochester, maintained a concern for divine sovereignty and biblical authority while exploring the insights of evolution and the historical-critical method of biblical studies. But by the 1920s, William Louis Poteat (1856–1938), science professor and president of North Carolina’s Baptist-related Wake Forest College, illustrated progressivism by teaching evolution to undergraduates, encouraging Baptists not to fear scientific investigation because Jesus Christ is “the theme, origin, and end of all truth.”

These views began to trouble fundamentalists. Liberal Baptist pastor Harry Emerson Fosdick (1878–1969) became a continuing target; his 1922 sermon “Shall the Fundamentalists Win?” only exacerbated the ire. Responding to the escalating controversy, he called for tolerance, even as he insisted that

Fundamentalists propose to drive out from the Christian churches all the consecrated souls who do not agree with their theory of inspiration. What immeasurable folly!

“A fundamentalist is an evangelical that is angry about something,” historian George Marsden once observed. Baptist fundamentalists directed this outrage initially toward two targets: Charles Darwin (1809–1882) and the historical-critical method of biblical studies developed in nineteenth-century Europe. Both, they believed, challenged biblical authority and veracity.

Darwin’s Origin of Species (1859) undermined the Genesis accounts of creation, the traditional Christian doctrine of creation ex nihilo (out of nothing), and the belief that humanity was created in the divine image. The infamous Scopes Trial, conducted in Dayton, Tennessee, in 1925, centered around John Scopes’s decision to teach evolution in his science classes, violating Tennessee’s anti-evolution law. Famed lawyer Clarence Darrow (1857–1938) defended Scopes with ACLU support, while the prosecution secured William Jennings Bryan (1860–1925), nationally known orator and erstwhile presidential candidate.

Likewise the historical-critical method of biblical interpretation—which analyzes textual language, dating, and editorial intent—was thought to place sacred writ on the same level as other literature. In The Fundamentals, Baptist professor J. J. Reeve linked evolution and “the Critical Movement,” calling them “fundamentally anti-supernatural and anti-miraculous.”

Fundamentalists defended a set of 14 nonnegotiable doctrinal fundamentals, which they asserted as a historic Christian response to modernism. Five points have endured as definitive of the movement: 1) biblical inerrancy; 2) Christ’s virgin birth; 3) his substitutionary atonement, taking upon himself the punishment deserved by sinful humanity; 4) his bodily resurrection; 5) his literal second coming.

In the South J. Frank Norris—a fierce populist called “the Texas Tornado”—brought monkeys into the pulpit to attack evolution and declared that preachers who take “the Bible allegorically and figuratively“ preach “an allegorical gospel which is no gospel.” Norris accused even the Southern Baptist Convention (SBC) of harboring liberals, ultimately departing to lead a movement of Independent Baptists who affirmed the Five Points and the absolute autonomy of every Baptist congregation. They rejected institutionalism, particularly “unbiblical” mission boards, preferring to fund and commission missionaries from each congregation.

Independent clergy formed loose-knit pastor-coalitions including the Baptist Bible Fellowship, the Premillennial Baptist Missionary Fellowship, the World Baptist Fellowship, and the Southwide Baptist Fellowship. Most insisted that Baptists are the only true church, in direct succession from New Testament congregations. They also pledged to avoid all contact with liberals. Thus many boycotted Billy Graham’s evangelistic crusades because he permitted Roman Catholic and mainline Protestant clergy to participate in those gatherings.

Independent Baptists were aggressively evangelistic, building some of America’s first megachurches. Many founded their own Bible schools, suspicious of liberal influence on traditional colleges and seminaries. William Bell Riley (1861–1947), pastor of First Baptist Church, Minneapolis, founded the Northwestern Bible School (1935) and college (1943); Billy Graham succeeded him as president in 1947.

Riley attempted to purge the Northern Baptist Convention of liberals and to require a denominational confession of faith for missionaries and professors at NBC-funded schools. When the denomination rejected those efforts, a frustrated Riley moved toward the World Christian Fundamentalist Association, a Baptist-dominated group that had funded Bryan’s work in the Scopes Trial and promoted fundamentalism in numerous denominations. This laid the foundation for a formal NBC schism and the formation of the Conservative Baptist Association of America in 1947.

While the SBC also lost members to Independent Baptists, it avoided formal schism because of its long history of conservativism, a leadership that resisted fundamentalism, and its emphasis on evangelism and religious experience as the source of unity. Southern Baptist Theological Seminary president E. Y. Mullins (1860–1928) contributed an essay to The Fundamentals in which he linked doctrinal orthodoxy with the experience of regeneration.

The SBC essentially deferred schism until the 1980s when a conservative coalition executed a doctrinal “course correction” (see “That’s where I used to go to church,” pp. 32–35). In the same period, many Independent Baptists such as Jerry Falwell would join forces with the Religious Roundtable and the Moral Majority. Northern Baptists continued to resist fundamentalist approaches, promoting policies that have made them one of the country’s most racially diverse Baptist groups. Today Baptists are the second-largest Christian group in the United States after Roman Catholics. Perhaps “multiply by dividing” is the best description after all. CH

Black Baptists and white Baptists shared something important in the twentieth century: a penchant for splitting