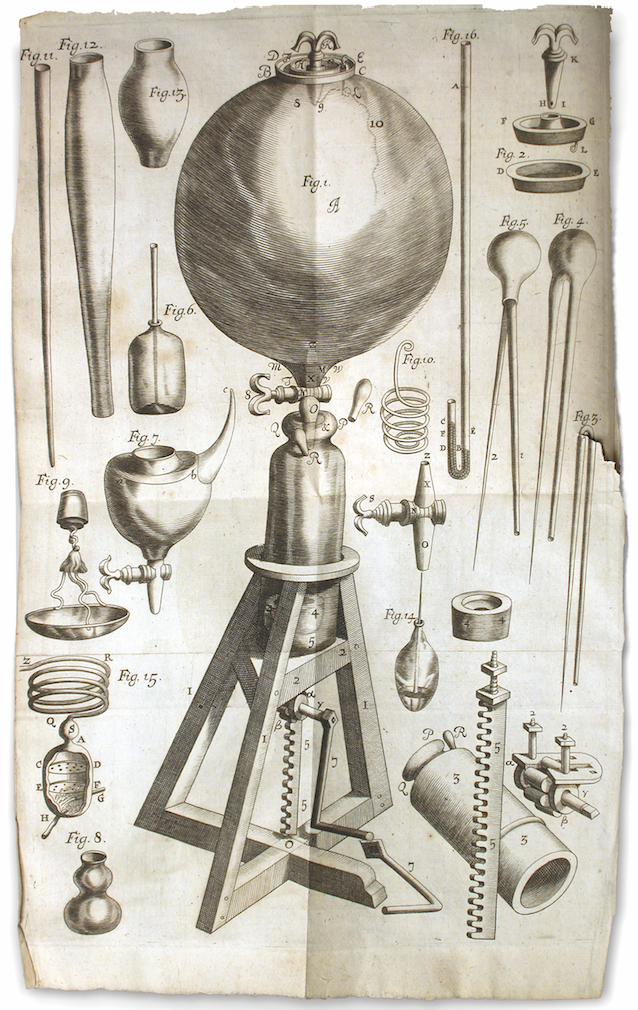 On occasion Albert Einstein (1879–1955) invoked the divine despite rejecting traditional Judaism. Writing to fellow physicist Max Born, one of the founders of quantum mechanics, Einstein dismissed the interpretation that things happen purely randomly at the atomic level: “Quantum theory yields much, but it hardly brings us close to the Old One’s secrets. I, in any case, am convinced He does not play dice with the universe.”

Questions about science that science itself cannot answer have been central to the field since the ancient Greeks, especially at times when science takes a fundamentally new direction. This was true of the revolutions in physics of the early twentieth century that Einstein participated in. But the establishment of modern science in Europe during the sixteenth and seventeenth centuries was equally revolutionary and no less philosophical—even theological—at its core. We see this clearly in the stories of German astronomer Johannes Kepler (1571–1630) and English chemist Robert Boyle (1627–1691). Each saw himself as a “priest” in the divinely created “temple” of nature.

Kepler was born into an important Swabian family that had fallen on hard times. His father was a mercenary soldier and his mother a healer and herbalist, who as an old woman was formally accused of witchcraft and threatened with torture; her son successfully defended her. A brilliant child, Kepler received a splendid education in Latin schools established by enlightened dukes in that part of Germany and studied theology at the famous Lutheran seminary in Tübingen—also learning astronomy from one of the earliest followers of Nicolaus Copernicus, Michael Maestlin (1550–1631).

It soon became evident that Kepler’s greatest talent lay in mathematics, not theology. He spent the rest of his life trying to understand the subtleties and intricacies of planetary motion, making profound discoveries essential for Isaac Newton’s later discovery of the law of universal gravitation. Ultimately Kepler found his faith only strengthened by his scientific work—leading him to say, “I wished to be a theologian; for a long time I was troubled, but now I see how God is also praised through my work in astronomy.”

Kepler wanted to know why science is possible at all. (Einstein later put it, “The most incomprehensible thing about the world is that it is comprehensible.”) Unlike Einstein, Kepler had a deep faith in God the Creator making us in his image and placing mathematical patterns into creation. He wrote to his Catholic friend Herwart von Hohenburg, chancellor of Bavaria, “For God there are, in all his corporeal work, corporeal laws . . . laws moreover most excellent and well ordered.” They are “within the grasp of human reason,” and “God wants us to know them, since he created us in his image, so that we might think the same thoughts God has revealed to us, and thus commune with God through reasoned thought.”

For Kepler our ability to do mathematics, especially geometry, was a divine gift. Influenced heavily by Plato’s Timaeus, Kepler believed that “geometry, being part of the Divine mind from time beyond memory, from before the origin of things, has provided God with the models for creating the world, models that have been implanted in human beings, together with the image of God.”

Here Kepler echoed the great Lutheran theologian Philip Melanchthon (1497–1560), without whose legacy it is doubtful that Kepler would have been able to learn about Copernicus in the first place. Melanchthon never accepted the Copernican system as an accurate description of the solar system—almost no one born before 1500 did—but nevertheless he admired its mathematical elegance and encouraged its teaching at Lutheran universities as a hypothetical, but useful, theory.

Melanchthon held that God “implanted in the minds of men” the principles of arithmetic, geometry, and logic; and that our knowledge of them—unlike our knowledge of morality—had been unaffected by the Fall. Kepler believed the same thing. Because “man is the image of God,” he told Herwart on another occasion, “it is quite possible that in regard to certain things that make the ornament of the Universe, he has the same opinions as God.” This had important consequences for Kepler’s notion of how science should be done—mainly by abstract analysis of the pure mathematics that God had built into nature and placed in our minds.

Boyle’s background was very different. His father, Richard Boyle, first Earl of Cork, had made an enormous fortune as an adventurer in Ireland. Robert and his many siblings inherited great wealth and never had to work for a living. However, instead of wasting his time on womanizing and idle pursuits, as some other members of his family did, the intensely pious Boyle practiced and promoted Christian virtues while helping to create the modern scientific laboratory.

Reports of his experiments on air and many other chemical substances circulated widely in England and on the Continent, making him one of the most famous scientists of the latter part of the seventeenth century—yet the sincerity and depth of his Christian faith were equally well known at home and abroad. Many in his own day and for generations afterward read his numerous works on morality, the Bible, and apologetics with appreciation, including hymn writers and theologians Richard Baxter (1615–1691) and Isaac Watts (1674–1748).

In keeping with his genuine humility, Boyle grounded his view of scientific knowledge in our status as finite creatures with a limited capacity to probe the deepest secrets of nature. Where Kepler believed we could obtain fully reliable knowledge of nature through mathematics, Boyle did not view the conclusions of reason as unquestionable truths: “Intelligibility by us men is no necessary condition of the absolute truth of a Thing.” God’s thoughts are higher than our thoughts: we are merely “purblind [dim witted] mortals” who are “incompetent judges” of God’s power, which reaches “farther than our limited intellects can comprehend.” After all, Boyle thought, God made the rest of the world before making humans, and he did not ask our opinion on how the job should be done.

Furthermore God had created freely, not out of logical necessity. God did not have to create anything; he created the world and human beings entirely of his own volition. Boyle believed that a free and sovereign God imposed the “laws of nature” upon matter. They “did not necessarily spring from the nature of matter, but depended on the will of the divine author of things.”

Boyle took seriously the possibility that God might have made worlds other than our own—not entirely unlike the modern notion of a multiverse. This idea arose from theological, not scientific, speculation. For all we know, such worlds “may be framed and managed in a manner quite differing” from our “part of the universe,” even to the extent of having different laws of motion. Likewise for the new heaven and earth promised in Scripture, where “the nature of things corporeal may be very differing from those that obtain in the present worlds.”

What about the only world we know, the one in which we live? God alone “knows particularly both why and how the universal matter was first contrived into this admirable universe, rather than a world of any other of the numberless constructions he could have given it.” Overall Boyle believed God created for reasons that are ultimately “undiscoverable by us,” and “the only reason we can assign, is that it pleased God at the beginning of things” to make it in one way rather than another.

Consequently Boyle’s idea of how science should be done differed markedly from Kepler’s: slowly building a picture of nature from the ground up by hard experimental work—not from the top down by abstract mathematics. He thought we needed carefully designed experiments and observations of the nature God has actually made, not speculations about what God must have done.

Scientists today use insights from both Kepler and Boyle because each was partly right. Both reason and experience are needed to understand the contingent order imposed on the world by a free and rational God. Here again Boyle and Kepler as Christians engaged a deep philosophical issue that also fascinated the agnostic Einstein: “What I’m really interested in is whether God could have made the world in a different way; that is, whether the necessity of logical simplicity leaves any freedom at all.”

Christian beliefs also made some theories more attractive than others. For instance, Kepler found Copernicus’s picture of the sun in the center powerfully attractive theologically. It matched his Neoplatonic belief that the Sun, the source of light in the universe, symbolizes God’s presence in the universe. Similar ideas had been articulated by earlier Christian thinkers, including Augustine, Robert Grosseteste, and Roger Bacon; the great poet Dante (1265–1321) held that heaven was a region of “pure light, intellectual light, full of love.” In The Discarded Image, C. S. Lewis would later picture the medieval universe as filled with light emanating from the sun—even the large, high windows of Gothic churches were meant to fill the space with light to manifest God’s presence.

Kepler also saw the Copernican universe as a three-dimensional representation of the Trinity; older Earth-centered cosmology lacked this crucial feature. Explaining this in the Epitome of Copernican Astronomy (1617–1621), the first textbook ever written about the solar system, he found “the center, [symbolic] of the Father; the surface, of the Son; and the intermediate space, of the Holy Spirit.” This motif, which he originally took on board as a university student, drove him for the rest of his life as he tried to prove the Copernican theory.

Boyle’s view of the universe was also theological at the core. The way scientific and medical practitioners of his day held tenaciously to pagan Greek conceptions of nature deeply troubled him. They often spoke of “Nature” as if it were a semidivine being overseeing natural processes—“Nature does nothing in vain,” or “Nature abhors a vacuum,” or “Nature is the best healer.” Noting that the Bible has no “Hebrew word that properly signifies Nature, in the sense we take it in,” he sought to drive the word out of science.

Instead he promoted the alternative notion of the creation as a vast, intricate, subtly designed machine that functions according to properties and powers given to it by God. Because an impersonal machine cannot be offended by human efforts to imitate and even surpass its capabilities, such a nature is more consistent with God’s command to rule over creation. The great complexity of the “great automaton,” the whole world itself and its various intricately constructed parts, cried out for a designing intelligence. He also thought that the more clearly we understand what created natural mechanisms can and cannot do, the more readily we can recognize genuine miracles that exceed the power of those mechanisms, such as those of Jesus and the apostles.

Although theology rarely rises to the surface in scientific debates today, it is still there, silently influencing philosophical ideas upon which the future of science depends. Kepler and Boyle would remind us that not only does God not play dice with the universe; he has created an admirable world and filled it with light. CH

By Edward B. Davis