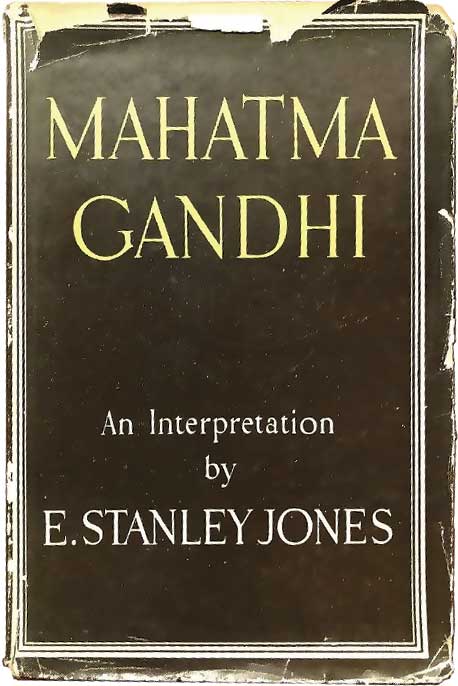 In Mahatma Gandhi: An Interpretation (1948), known today as Gandhi: Portrait of a Friend, Jones describes his friendship with the Indian leader. The passage below is known to have influenced Martin Luther King Jr. as he developed and applied the idea of non-violent resistance.

The greatness of Gandhi consisted in the fact that he would not look at the end results; he would use the right means, and the right result would follow. The universe guaranteed it. He could subscribe wholeheartedly to these familiar lines [from “The Present Crisis” by James Russell Lowell]:

Yet that scaffold sways the future, and, behind the dim unknown,

Standeth God within the shadow, keeping watch above his own.

Fully arrayed with these convictions, Gandhi steps into the arena of India to apply his principles on the widest scale, for the biggest stakes ever attempted by any man. He would win freedom for India by truth and nonviolence.

It is true that the historic situation helped in the adoption of nonviolence, for India was a disarmed nation. Arms were licensed only to those who were known supporters of the government. So nonviolence was accepted out of necessity, and yet out of choice. And further: undoubtedly an overruling Providence was using India as a proving ground for a new type of power, the power of soul.

We will not obey you

I said the method of the Mahatma was simple, and more, it must be kept simple. You cannot complicate it by mixing in other methods to help it out. For instance, a leading communist of Ceylon said to me: “We communists are prepared to use any method that gets us to our goal—the ballot, passive resistance, or force.” Here he revealed a muddled moral mentality. If you submit the issues to the ballot box, you have to abide by the decision of that ballot box. You cannot abandon it if it goes against you and appeal to force. That is not democracy.

Nor can you begin using nonviolent passive resistance and, if you find it isn’t working, then appeal to force. These methods cancel out each other.

You cannot alternately use the moral appeal and, if it doesn’t work, then use force; for the one against whom you appeal must know that you are depending on the moral alone and will not abandon it halfway. It must be kept pure. And the Mahatma wisely kept it pure. South Africa taught him to keep his eye single; then his whole body would be full of light. But if his eye became evil (complicated), then the whole body would be full of darkness.