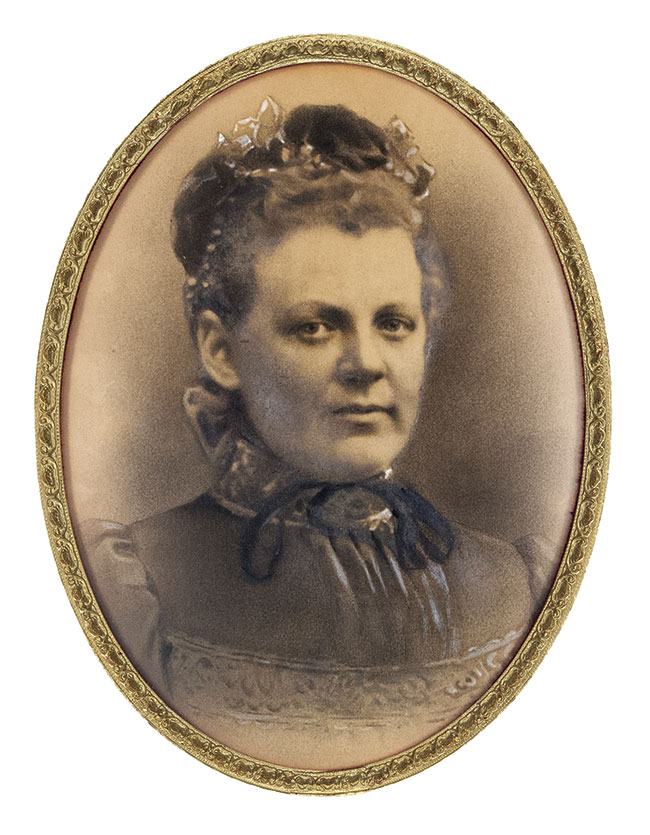 In his autobiography C. S. Lewis wrote that he was the product of “good parents, good food, and a garden.” His parents—police court solicitor Albert James Lewis (1863–1929) and mathematician-turned-housewife Florence (Flora) Hamilton Lewis (1862–1908)—were two intriguing individuals in their own right. Lewis mentions the “endless books” stacked some two-deep on shelves throughout their home, Little Lea, reflecting Albert and Flora’s shared love of reading and writing. Their artistic and spiritual influences, as well as those of their extended family, played a significant role in the development of both Jack and his brother, Warren (Warnie).

Lewis described his parents as “bookish or ‘clever’ people” but added that “two very different strains had gone to our making.” His father’s family hailed from Welsh stock; Lewis characterized them as “sentimental, passionate, and rhetorical, easily moved both to anger and to tenderness.” His father originated from a line of boilermakers. His grandfather Richard, originally working class, migrated to Belfast to establish the firm MacIlwaine and Lewis: Boiler-makers, Engineers, and Iron Ship Builders. Richard carved the family’s wooden wardrobe in Lewis’s childhood home that provided the inspiration for the wardrobe into Narnia.

Richard Lewis was an intelligent man, writing and presenting religious essays to Cork Steamship Company’s Workmen’s Library. Warnie called him part of the “working class intelligentsia in the forefront of that artisan renaissance which gave birth to the trades union and Co-operative movements.” Richard and his wife, Martha, had seven children: Martha (1854–1860), Sarah Jane (c. 1856–1901), Joseph (1856–1908), William “Limpopo” (1859–1946), Richard (1861–?), and Albert James (1863–1929). William and the younger Richard, the “Scottish uncles,” crop up often in C. S. Lewis’s Collected Letters; like their enterprising father, they moved to Glasgow and opened a business—W. & R. Lewis, Rope and Twine Manufacturers.

Jack and Warnie had a bevy of cousins and were close to many as children. Their cousin Joseph Lewis (1898–1969), affectionately “Ted” to family, was the physician who tended to Albert Lewis in his final weeks. Dr. Lewis had a generally eventful career; he spent time as house physician at the Royal Hospital, served abroad as a doctor, and was taken prisoner in Benghazi after the fall of Tobruk. After his release he served as a medic at Normandy and was one of the first British physicians to enter Belsen Concentration Camp after its liberation.

Albert James Lewis, the youngest of Richard’s sons, seemed cut from a different cloth than his entrepreneurial brothers. Recognized as the “cleverest and least commercially minded,” Albert was cut out for further education. He began attending Lurgan College at the age of 14 (in his final months, he told his family that this was due to constant conflicts with his brothers). At the time Lurgan was under the leadership of W. T. Kirkpatrick (see p. 27). Albert soon found a passion for public speaking and fostered political ambitions.

In February of 1885, Albert took his solicitor’s exams and “qualified with distinction.” He had apprenticed with Jasper Boyle of McLean, Boyle, and McLean since August of 1880 and was swiftly rising into a promising career in Belfast politics as a conservative candidate. His speeches drew enthusiastic crowds, though some were a bit critical of his exuberance, a criticism echoed by his son Jack. However, Albert abandoned those plans and accepted a post as police court solicitor, a position he maintained for nearly 30 years.

Albert also had early aspirations to be a writer. Unfortunately, aside from his brief time at Lurgan, he had neither the financial means nor the opportunity to attend public schools (private schools in the American sense)—deficits he hoped to correct for his own sons.

Nevertheless, through speeches about Irish Home Rule (self-government for Ireland), Albert became a popular and well-respected rhetorician whose articles appeared in local publications. His parents were pleased; his father’s partner John MacIlwaine told him, “I think with practice and experience, you should make a really good writer, and I hope you will stick with it.” Albert eventually wrote several short stories and poems, including “The Story of a Half Sovereign,” recently published in Sehnsucht: The C. S. Lewis Journal.

Readers of Surprised by Joy will recall C. S. Lewis’s disdain for his father’s more irritating habits: being loud and emphatic, talking incessantly of local politics, demanding to have his dinner at 2:30 in the afternoon, and insisting that the windows at Little Lea remained closed despite the weather. Warren characterized him in the Lewis Family Papers as having “a vivid imagination and a love of rhetoric” and “an almost Chinese sense of drama. . . he saw life in terms of a stage play—sometimes a melodrama—in which it behooved him to give of his best in whatever role chance or his own inclinations had temporarily cast him.”

The Lewis brothers would later regret disparaging their father. Jack wrote to Warren during the selection of Albert’s casket that his uncles and father were characteristic of many “big Victorian families” whose social universe was almost exclusively focused on family relationships. Later Jack met a friend’s father and mournfully admitted in a letter that it made him remember “how abominably I had treated my father.”

In contrast to the working-class Welsh farmers prominent in the Lewis clan, Lewis’s mother’s family, the Hamiltons, came from a long line of educated Anglican clergymen and attorneys. They even had connections to Robert the Bruce, famed medieval king of Scotland. Lewis called his mother’s family a “cooler race” who “went straight for [happiness] as experienced travellers go for the best seat in a train.”

His grandfather Reverend Thomas Hamilton (1826–1905), educated at Trinity College in Dublin, spent time as a naval chaplain. Hamilton later served as rector at St. Mark’s Dundela in Belfast (where he baptized his grandsons) and vocally opposed the Catholic Church. His wife, Mary (1826–1916), was an outspoken advocate for Irish Home Rule, a decidedly liberal stance for such a conservative woman.

Lewis biographers Robert Lancelyn Green and Walter Hooper called Mary “infinitely [her husband’s] superior in energy and intelligence.” She was a “clever and aristocratic woman,” a “typical daughter of a Southern Irish [lord] of the mid-nineteenth century, and the Rectory at Dundela reflected her tastes.”

Warnie wrote that his grandmother’s home smelled of cats and was punctuated by dirty rooms. Her bejeweled hands also revealed evidence of her enthusiastic involvement in poultry farming. At dinner she gave visitors a chair bearing “three sound legs” while eating perfectly cooked salmon “off of a chipped kitchen dish.”

Thomas and Mary had four children: Lillian (1860–1934), Florence Augusta (1862–1908), Hugh Cecil Waldgrave (1864–1900), and Augustus Warren (1866–1945). “Aunt Lily” had no children of her own and was quite fond of her nephew Jack, calling him “Cleeve.” Aunt Lily had a prodigious intellect, and she waxed philosophical on varied subjects. Her nephew characterized her as “a clever but eccentric woman” who, like her mother, Mary, was often surrounded by cats; her conversation was “like an old drawer, full of both rubbish and valuable things, but all thrown together in great disorder.” She read early drafts of Dymer, Lewis’s first narrative poem, and provided feedback.

Jack and Warnie’s uncle Hugh Hamilton moved to Queensland and became a sheep farmer, serving in the South African War (1899–1902) as captain of the Queensland Artillery. Uncle Augustus, or “Gussie,” was—like his sister Flora—a brilliant mathematician. However, Mary Hamilton did not allow him to attend university for unknown reasons, so he founded the firm of Hamilton and McMaster, marine boilermakers and engineers. Gussie was one of his brother-in-law Albert’s best friends.

Flora was not the most adored of her siblings, but when she attended university in her twenties, she revealed her true talents as a scholar. On college mathematics examinations in 1881, she achieved a “First Plus” (mid-range of First Class Honours, the highest possible rank) in geometry, a First Plus Three (near the top of First Class Honours) in algebra, Second Class Honour in logic, and Lower Pass Division in theory of music. Despite this stellar achievement, she could not, as a woman, “in fairness be considered as [a competitor] for Senior prizes.”

Warren wrote that his mother,

like her brother Augustus, was a brilliant mathematician, and had her youth been lived in the period of female emancipation, [she] would almost certainly have [graduated with] a good degree. She retained her interest in mathematics to the end of her life.

Flora’s early academic success may have catalyzed two different attempts to allow women to take courses at Queen’s College—attempts met with substantial opposition. Despite this Flora remained at Queen’s and its successor, the Royal University. With the support of the college president, the college council agreed to allow women to attend art lectures in 1882. Male “practical jokers” burned cayenne-pepper pods in a physics class in the presence of women to express their angst. Undeterred, Flora earned a passing score on the Examination in Arts with First Class Honours in logic and Second Class Honours in mathematics, finally earning a BA in 1886 at age 24.

Albert and Flora began their courtship after she had already refused him on multiple occasions; it was their shared love of the written word that ultimately brought her around. Flora sent her now-extinct short story, “The Princess Rosetta,” published in The Household Journal, for Albert’s assessment. He praised the story as a work of great talent, and they bonded over shared appreciation for the writings of John Ruskin.

The two married in 1894. Unlike conventional Victorian parents of the day, they collaborated on responding to their sons’ academic aspirations. The boys were allowed unlimited access to Albert’s extensive library; he was a great lover of poetry (especially Tennyson), as well as of Shakespeare, Dickens, and Anthony Trollope.

Flora had little interest in poetry; she preferred George Meredith and Leo Tolstoy. She took her boys to the Irish and French coasts and allowed them to explore. Flora also taught her sons how to play chess, instructed them in Latin and French, and tutored Warnie in mathematics. She modeled a strong and resilient faith in the midst of her last illness. Her final gift to each son was a Bible purchased shortly before her death, inscribed “from Mammy with fondest love.”

Too often we admire the beauty of one great bloom and fail to see the magnificence of the garden surrounding it: the soil that nurtures it, the textured greenery that complements it. The Lewis and Hamilton families made substantial contributions to the artistic and spiritual development of Jack and Warnie Lewis. Flora and Albert created a family climate that engaged their sons’ imaginations, valued their intellect, and nurtured their faith, inspiring them to be industrious and studious, ambitious and clever. Ultimately the Lewises and the Hamiltons helped to shape the heart and mind of one of the greatest intellectuals and apologists of the twentieth century. CH

Crystal Hurd is an educator and researcher from Virginia and the author of 30 Days with C. S. Lewis and The Leadership of C. S. Lewis: Ten Traits to Encourage Change and Growth, releasing in the fall of 2021.