It Happened on SEPTEMBER 26 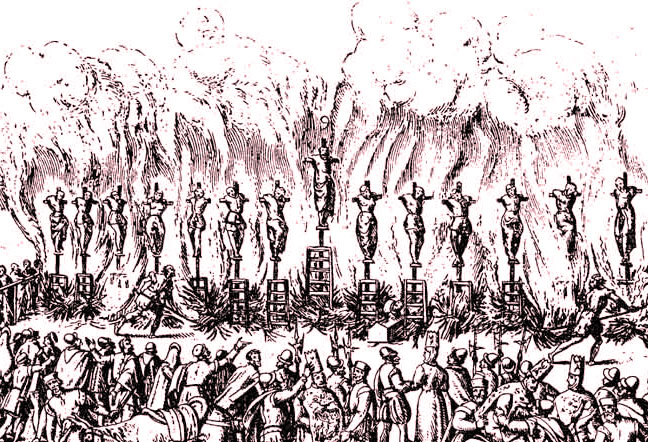 ON MAUNDY THURSDAY, March 23, 1559, inquisitors raided a Protestant meeting in Toro, Spain. Among the secret worshipers captured in the raid were Antonio Herrezuelo and his wife of five years, Leonor de Cisneros.

Evangelical ideas had come to that part of Spain largely through the efforts of Carlos de Seso, mayor of Toro. Such ideas were dangerous to hold because in 1554 Pope Paul IV had granted the Inquisition power to execute even those who had recanted their “Lutheran” beliefs. (Those who held Protestant beliefs were all called “Lutherans” in Spain, without distinction between different shades of non-Catholic belief.)

Held in isolation, twenty-three-year-old Leonor was told that her husband and the other captives had recanted. In fact he had not—as she soon learned. She was threatened with the rack and the stake if she held onto her “heretical” views.

On 8 October that year, all the “heretics” were led to the auto da fe. Twelve who made a last minute repentance would still be burned but with the merciful provision that they would be strangled first. Not Antonio. He had stood so firm that he was to burn alive.

Leonor and he met on the way to the stake. She saw that he wore the garb of one who was to burn. He saw that she was dressed in the garb of a penitent. Furious that she had reneged, he kicked her and demanded to know if her renunciation was all the value she placed on the Christian teaching he had given her. Aghast, Leonor did not reply.

As the procession passed through the streets, Antonio sang psalms and recited passages from the Bible. His captors could not endure this witness and clamped his tongue to prevent him expressing his faith. Paulo Tiepolo, Venetian ambassador to King Philip II of Spain, witnessed the burning and wrote,

The baccalaureate Herezuello de Torro, condemned to confiscate his property and burn. He was burned alive, insisting on his heresy, gagged all the time, never acknowledging the Holy Church of Rome.

The words of her husband and his brave death steeled Leonor’s mind. When she returned to her cell, she fell to her knees and implored God to forgive what she had done. She had been sentenced to imprisonment in a Benedictine monastery to be re-educated in the Catholic faith. However, she now resisted, declaring herself a Lutheran; and despite several long years of brainwashing and torture she never buckled. Finally after nine years her captors realized she was not going to yield to their demands and they condemned her to die as a heretic.

A local historian accused her of inviting death on herself, observing, “Nothing could shake the obstinacy of this stubborn woman!” On this day, 26 September 1568, thirty-three-year-old Leonor de Cisneros walked to the stake in Valladolid. There she was burned alive, suffering as courageously for her faith as had her husband.