It Happened on JULY 29

ROBERT BARCLAY, A BOLD AND CAPABLE EXPOSITOR OF QUAKER TEACHING 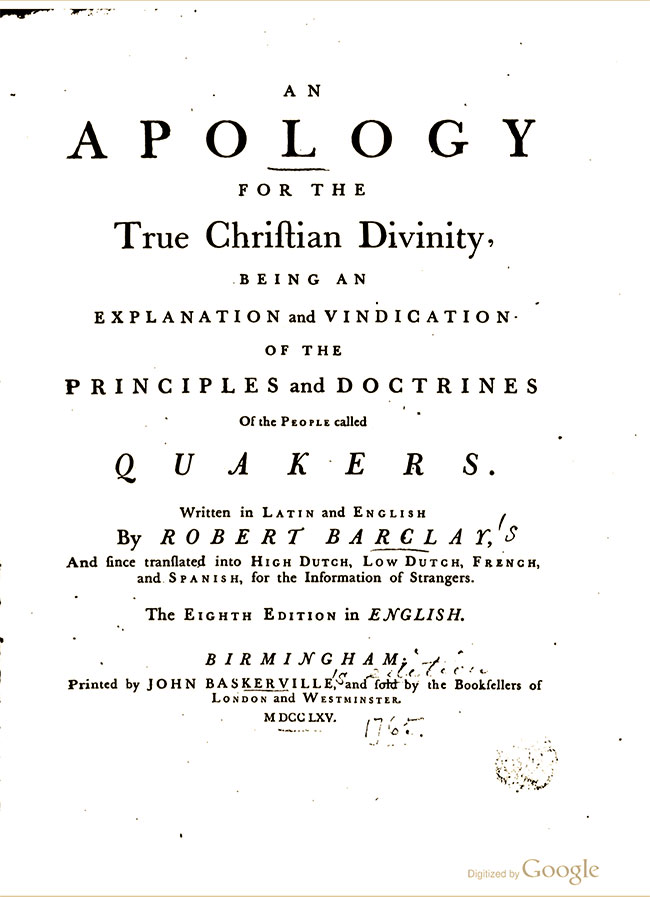 Robert Barclay was a prominent seventeenth-century spokesman for the persecuted sect called Quakers. And he was the ablest defender of their theology.

How he became a Quaker is worth retelling. His earliest religious training was in the strict Calvinism of Scottish Presbyterianism. As he was entering his teens, a wealthy uncle invited him to further his education in the Scottish school in Paris. Barclay not only studied there but practiced Roman Catholicism. His dying mother became concerned that he would depart entirely from the family faith and convinced her husband, David Barclay, to call sixteen-year-old Robert home in 1664. Robert’s uncle offered him his entire estate to remain in France, but Robert chose to obey David.

Back in Scotland, Robert attended meetings of various religious groups. In 1666, David Barclay converted to Quaker views while in prison for some now-forgotten political offense. Believing that religious conviction must come from within, David exerted no pressure on his son to join the despised sect. However, Robert soon embraced it, explaining his conversion in these words,

[W]hen I came into the silent assemblies of God’s people, I felt a secret power amongst them which touched my heart; and as I gave way unto it, I found the evil weakening in me, and the good raised up; and so I became thus knit and united unto them, hungering more and more after the increase of this power and life, whereby I might find myself perfectly redeemed.

Robert Barclay was an active participant in the religious ferment of the day. He walked in sackcloth to warn citizens of coming judgment, debated religious opponents, spent time in jail, made mission tours to mainland Europe in company of William Penn, and published tracts, pamphlets, and books. In 1676, he issued his most important work, An Apology for the True Christian Divinity, which set forth a clear explanation and biblical defense of Quaker theology. He advocated religious toleration because he believed all humans have an inner light regardless of their creed, and if obedient to it will be saved.

Persecutors imprisoned David Barclay at various times for offenses such as not attending services in the established church. The crowded and dark conditions of his captivity were inhumane. While attempting to free his father, Robert appealed to the Duke of York, creating a lifelong friendship. (The Barclays were related to the Duke, but this was Robert’s first meeting with the future King James II.) Unable to free his father, Robert went back to Aberdeen. He, too, was imprisoned, spending five months in jail during the latter part of 1676 and early 1677. Fortunately, his conditions were better than his father’s.

The Barclay friendship with the Duke of York led King Charles II to grant Quakers lands in New Jersey.* The king named Robert Barclay governor, but allowed him to exercise his authority by deputy. Barclay appointed Gawen Laurie in his place and never visited his holdings.**

Settlers were hard to come by because people were leery of the hardships they would face in the undeveloped lands. Robert Barclay saw that one way of increasing New Jersey’s population would be to release political prisoners to settle in the New World. In 1684 he petitioned the Privy Council of Scotland “that such of the phanatiques [fanatics] as they thought fitt to banish” be released to the New Jersey company. The request was blocked by a treasurer who disliked colonization.

On this day, 29 July 1685, Barclay renewed his petition that political prisoners be permitted to go overseas. He appealed to the council’s practical interests, pointing out that sending prisoners to New Jersey would relieve the council of trouble and expense. His appeal was successful. The very next day the register of the council released two dozen prisoners for transportation to America.

Barclay died in 1690, only forty-one years old. He left a widow and seven children, all of them faithful Quakers. William Penn said of him,

He loved the truth and way of God as revealed among us, above all the world, and was not ashamed of it before men; but bold and able in maintaining it. He was a learned man, a good Christian, an able minister, a dutiful son, a loving husband, a tender and careful father, an easy master, a good and kind neighbor and friend.

** Although Britannica suggests he spent time in the New World, all the early biographies and Elton Trueblood’s full-length life explicitly assert he was always a non-resident.