It Happened on JUNE 23

MARK OF EPHESUS, PILLAR OF ORTHODOXY 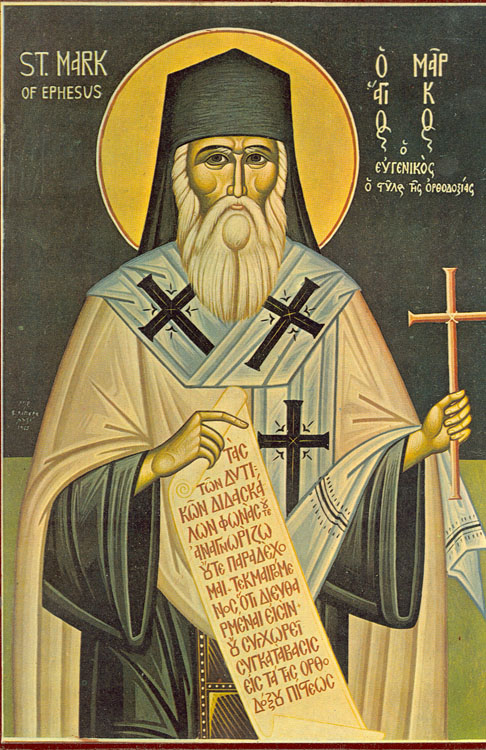 FIFTEENTH-CENTURY bishop Mark of Ephesus has been called “a pillar of Orthodoxy” and “the conscience of Orthodoxy.”  These names both honor his lonely stand in behalf of the teachings of Eastern Orthodoxy at the Council of Florence (1431–1449). At the council, the Orthodox attempted to patch up past differences with Roman Catholics and achieve Christian unity because the eastern empire, hard pressed by Muslim armies, needed Roman help.

Pope Eugenius IV would only agree if the Eastern Orthodox patriarchs scrapped key points of their theology and accepted Roman Catholic dogma. Mark was the only bishop who refused to sign the resulting lop-sided agreement. He considered Roman Catholicism to be a heretical schism. Without consultation with the East, Rome had changed the creed to declare that the Holy Spirit proceeds from both Father and Son. Rome also claimed the primacy of the pope over the entire church, whereas the Orthodox had always considered the pope only “first among equals” of the five leading patriarchs. And the western church had adopted the notion of purgatorial fire, for which the Orthodox found no warrant in tradition or Scripture.

Mark, a prolific writer and a leading theologian, was famous for such statements as, “It is impossible to recall peace without dissolving the cause of the schism—the primacy of the Pope exalting himself equal to God,” and “the notion of a punishment prior to the Last Judgment and of a purification through a material fire is altogether foreign to the tradition of the Church.”

The common people of the eastern empire agreed with Mark rather than with the majority of their other political and religious leaders. By his act of boldness, Mark became the rallying point for the opposition and kept the Orthodox Church true to its traditions. When it became apparent how influential Mark was among the lower clergy and people, Emperor John Paleologos imprisoned him for two years on the island of Limnos. Mark wrote:

If there had been no persecution, the martyrs would not have shone, nor would the confessors have received the crown of victory from Christ and by their exploits strengthened and gladdened the Orthodox Church.

Feeble when released, Mark returned to Constantinople where he lived out his few remaining months. As his end approached, he requested George Scholarios to take up the work of defending Orthodoxy. Scholarios did, serving as patriarch of Constantinople under Muslim conquerors.

Having rejected communion with those who were willing to adopt the Roman rites in order to obtain union, Mark said,

I am absolutely convinced that the farther I stand from him [the Patriarch] and those like him, the nearer I am to God and all the saints; and to the degree that I separate myself from them am I in union with the Truth and with the Holy Fathers.

Mark died on this day, 23 June 1444, after an excruciating two-week battle with intestinal disease.