It Happened on MAY 28

Despite Dire Circumstances, Martin Rinkart Wrote a Hymn of Thanks 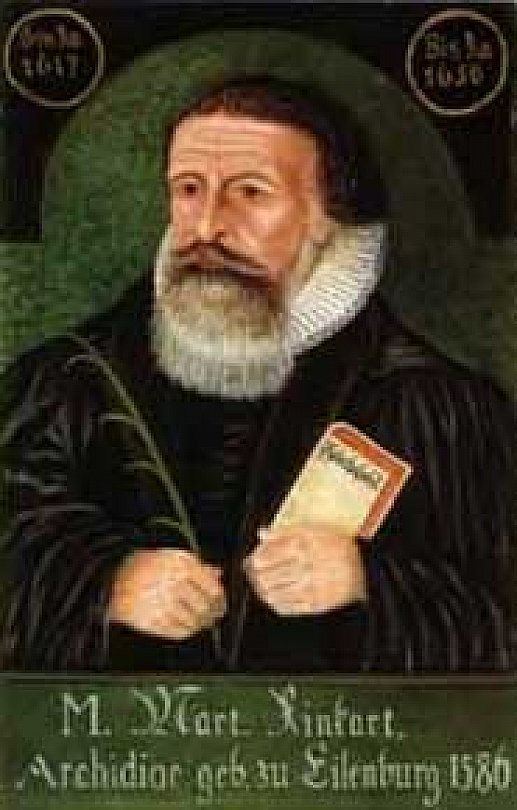 His most famous hymn is "Now Thank We All Our God."

MARTIN RINKART was the son of a poor coppersmith in Eilenburg. By hard work, thrift, and the use of his musical talents, he scraped together enough to pay his own way through the University of Leipzig. He studied theology, intending to become a pastor.

But when he applied for an open post as a deacon in 1610, he was turned down. He did not grumble, but took work in a Lutheran church school. Soon, though, on this day, 28 May 1611, he undertook duties as a deacon of St. Anne’s Church in Eisleben, a common step toward a pastorate. He had been at Eisleben only two years when his hometown Eilenburg invited him to become archdeacon of its church. He remained there until his death.

In 1617, shortly before the Thirty Years’ War broke out, Rinkart became a full pastor. Eilenburg was a walled city, and as the war developed, refugees flooded in. Overcrowding led to food shortages. By 1637, the situation was so bad that refugees fought in the streets for dead cats and birds. Plague soon followed. Each of the city’s four pastors held ten or more funerals a day. Overwhelmed, one ran away. The others died, leaving Rinkart to bury them. Though alone, he continued to hold all of the funeral services himself, sometimes for as many as fifty people a day. This included his own wife.

Glory to God Alone is the story of Bach and his marvelous music.

He survived the entire war, pouring himself out in charity, giving away all the food and clothing he had obtained, except just enough to preserve his own hungry family. He even mortgaged his future earnings. After the Swedes had besieged the city for several months, they agreed to leave if an enormous ransom was paid. Rinkart pleaded for better terms, but the Swedish army was inflexible. Knowing the sum could not be raised, Rinkart fell to his knees, praying so fervently that the Swedish captain was deeply moved and reduced the demand to a manageable amount.

When it finally appeared that there would be peace, Rinkart wrote a hymn of gratitude for his children to sing at the dinner table. “Nun danket alle Gott” was later translated into English by Catherine Winkworth as “Now Thank We All Our God.” Bach used it in his Cantata 192, which has the same name:

Now thank we all our God, with heart and hands and voices,

Who wondrous things has done, in whom this world rejoices. . . .