It Happened on MAY 27 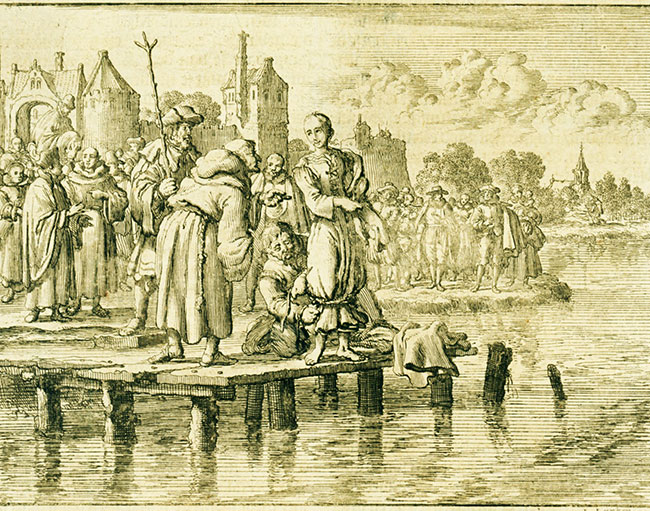 Elizabeth Dirks’s parents put her in a convent as a girl. We don’t know why, but that decision brought her to Christ—and to death. In the convent, Dirks* learned to read both Latin and her native Dutch. She pored over a Latin Bible. Becoming convinced monasticism was not biblical, she looked for a way out.

Help came from a friendly milkmaid, who exchanged clothes with her. Elizabeth walked away in the simple disguise and came to nearby Lier. She sought refuge at a house that turned out to be home to some Anabaptists. They instructed her in Christian faith and then took her to Leeuwarden to live with an Anabaptist named Hadewijk. Hadewijk’s husband was gone. Forced to witness the burning of a godly Anabaptist, he had spoken in his defense then fled town to escape a similar fate. His wife never heard from him again. At the time she was still a Catholic and had refused to leave with him.

Dirks labored with the local Anabaptists. Authorities observed her with Anabaptist leader Menno Simons so often they mistook her for his wife. In January 1549 they arrested Hadewijk and Dirks. They knew they had come to the right house when they found a Bible. Hadewijk miraculously escaped but Dirks underwent interrogation.

When the town council tried to get her to take an oath, she would not. Jesus taught us that our “yes” must mean “yes” and our “no” mean “no,” she said. Authorities demanded she tell who baptized her and name her “accomplices.” Dirks refused. “No, my Lords, do not press me on this point. Ask me about my faith and I will answer you gladly.”

“We will make you so afraid that you will tell us,” they threatened.

In answer to questions, she explained what Anabaptists believed about the Lord’s Supper and baptism. She discussed the nature of the true church, and the authority of priests. Asked if baptism saved her, she replied, “No, my Lords. All the water in the sea cannot save me. All my salvation is in Christ, who has commanded me love the Lord, my God, and my neighbor as myself.” Most of her answers quoted the Bible.

To get her to inform on other Anabaptists, they carried through their threats of torture. First they applied thumbscrews until blood spurted from under her fingernails. She cried out to Christ, but did not betray fellow Anabaptists, because the Lord took the pain from her. Her tormenters then discussed crushing her legbones with screws. She begged them not to touch her body, as she had always been modest. They promised to respect her. Although they crushed her legs until she fainted, she did not name any other Anabaptists. When she passed out, her tormenters thought she had died.

When she came to, they ended the interrogation. Seeing they could get nothing from her, they condemned her to die. On this day, 27 May 1549, they drowned Elizabeth Dirks in a bag. The transcript of her interrogation remains to show her courage, modesty, and faith.

*Not to be confused with another Anabaptist Elizabeth Dirks, who was the wife of Jerome Segers; they were executed in 1551.