It Happened on MAY 23 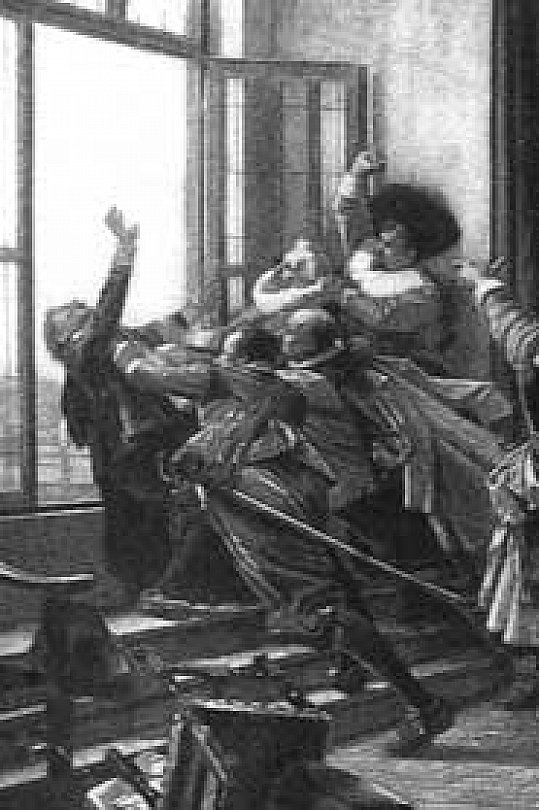 IN 1415, a hundred years before the Reformation, reformer Jan Hus was betrayed and burned at the stake, leading to two decades of religious and ethnic warfare in Bohemia—followed by an uneasy peace in which Catholics and moderate Hussites (reformers) shared power. Hus’ followers fought not only German and Slavic invaders attempting to restore the authority of the Roman Catholic church, but  even turned on each other.

The coming of the Protestant Reformation in the sixteenth century, with all the animosities it created between Catholics and Protestants across Europe, did nothing to ease these tensions. In response, Emperor Rudolph II issued a Letter of Majesty granting freedom of conscience and worship in Bohemia. The Protestant reformers were required to form one common group, but were allowed to build new churches.

Rudolph died soon after issuing the letter. His successor, Matthias, delegated power to Roman Catholics, who immediately forbade Hussites from erecting new churches and even tore down ones that had been built. Furthermore, Matthias suddenly summoned the Bohemian Diet (parliament) and obtained a ruling that succession was not elective but hereditary. This meant the Catholic Ferdinand of Styria would become the next king of Bohemia, rather than a Protestant such as the Elector Palatine or the Elector of Saxony. When Matthias left Prague, he left control in the hands of Catholic regents. The regents arrested any delegates to the Diet from the reform party who protested the destruction of their churches.

Under the Letter of Majesty, the reformers had the right to elect protectors to settle disputes among themselves and to negotiate with the Catholic party. The protectors gathered in Prague in May 1618 and drew up a petition to the Emperor Matthias, which they delivered to the regents. The response came back so quickly the protectors were sure it could never have reached Matthias. They accused the regents of writing it themselves. The protectors met on 21 May, but the regents immediately presented them with a letter from Matthias dissolving their assembly. In defiance of the letter, the protectors met once again on this day, 23 May 1618. They bribed their way into the regent’s castle and after an exchange of words, flung the regents (Count Vilem Slavata, Count Jarolslaw Martinitz, and secretary Philip Fabricius) out the window.

In this they were imitating a famous incident from 1419, when Hussites had executed seven members of the city council by flinging them into the street. That was known as the First “Defenestration of Prague.” The word “defenestration” is from Latin “de” meaning “out of” and “fenestra,” “window.” Today’s incident became known as the Second Defenestration of Prague. Fortunately for the three men involved, they survived being tossed out the window. Roman Catholics attributed this to the intervention of Mary and the angels, while the Hussite party said it was because the men fell into a pile of soft manure.

At any rate, the incident sparked a war that spread across Europe, where it raged from 1618–1648, principally in German territories. It was called the Thirty Years’ War. At the end of the war, Protestant and Catholic in most of Europe were more or less stalemated—although not in Bohemia. Most Moravians, many Hussites, and other Protestants were driven out of Bohemia or suppressed, and Bohemia became solidly Catholic.