It Happened on APRIL 29 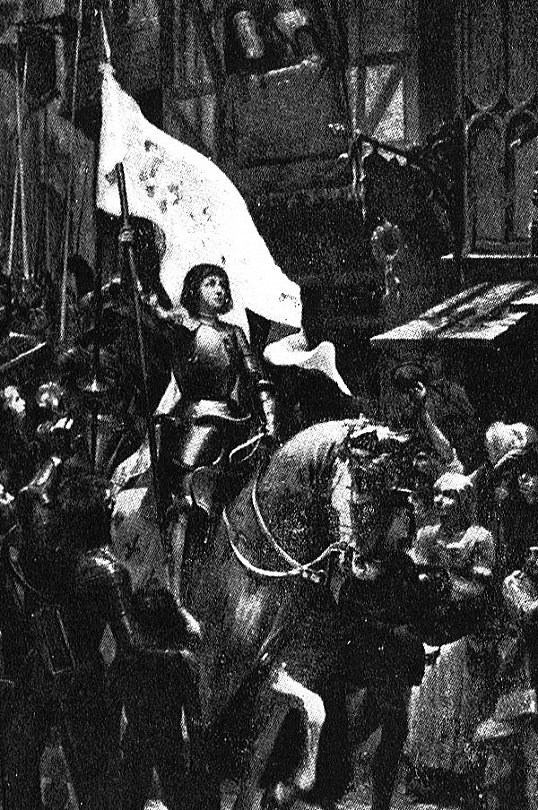 A victorious Joan of Arc displays her banner.

IN 1429 things were going badly for France in what became known as “The Hundred Years War.” England’s king claimed the French throne, and his armies held everything north of the Loire River as well as the province of Burgundy. Now his forces were besieging Orleans, a key city on the Loire. Should it fall, everything south of the Loire would be open to invaders.

Surprisingly, the tide turned thanks to a peasant girl. Joan tended sheep and spun thread like any other girl of her status. She lived in the Burgundian town of Domremey and was as deeply distressed by the French losses as any patriot. Simple and pious, she had heard voices from the age of thirteen. Now she declared that saints and angels had appeared to her, and declared that God would deliver France through her.

Slipping away from her parents with the excuse that she wanted to visit an uncle in a neighboring town, she presented herself to local officials, announcing her mission and asking for help.

Although Joan was unable to convince local authorities, a few people believed her and promised assistance. Soon she rode into Tours where the Dauphin (heir to the French throne) was frittering his days away in pleasure while the English gnawed at his kingdom. Joan picked the disguised Dauphin out of a crowd of courtiers. The Dauphin had theologians examine her faith and the women of his household examine her virginity. She passed both examinations.

Joan declared that she was sent to save Orleans. It took the Dauphin and his soldiers some convincing, but eventually she was given an army, a banner, and a gorgeous suit of armor. She immediately rode to the relief of the besieged city. On this day, 29 April 1429, Joan arrived at Orleans. A storm raged and the wind was against her. She ordered a convoy loaded onto boats anyhow, promising the wind would change. It did. Under cover of a rainstorm and assisted by a sally from Orleans, Joan got supplies and troops into the city. She herself insisted on staying with two hundred men while army leaders returned for another convoy.

Four days later, this second force also entered Orleans unharmed by the English. On 4 May the French began a battle without telling Joan. Things went badly for them but as soon as Joan suited up and reached the front line, she rallied the French around her banner. After three hours of furious fighting, they captured a bastille held by the English.

In succeeding days, her resolution inspired the army to action when its leaders wanted to rest content with what they had just attained. French captains tried to prevent her from attacking the Bastille des Tournelles, the strongest of the English garrisons, but she insisted, and the people supported her. During the fighting, an arrow pierced her, stalling the French attack. Joan had the arrow pulled from her body and the wound bandaged, and she hurried back into the fight, to the consternation of the English, leading another charge. Tournelles fell. As she had predicted, she rode back by the bridge. The English raised their siege. Barely eight days had passed since her arrival in Orleans.

In just a few more days, the English garrisons around Orleans were all captured, but the Dauphin still had to be coaxed into action. Joan convinced him to undertake a few moves, which he did, if only half-heartedly. After the French won a key victory at Pasay, the way was open to Rheims, the traditional location for the crowning of French kings. Still Joan had trouble convincing the Dauphin to have himself crowned. He finally did.

Joan had completed the two tasks she believed God had laid upon her—relieving Orleans and crowning the king. However, frustration lay before her. The king lacked the heart and vision to pursue his present advantages, and he failed to retake Paris.

Joan was captured by Burgundians and handed over to the English, who charged her with witchcraft. They tried her without allowing her legal counsel and confronted her with a panel of theologians determined to find some fault in her answers.

The biased and unfair court convicted her. When brought to the stake to be burned, she asked that a crucifix be held before her face and she called upon Jesus as long as she could breathe. A second inquiry exonerated her and Pope Benedict XV officially canonized her as a saint in 1920.