It Happened on MARCH 18 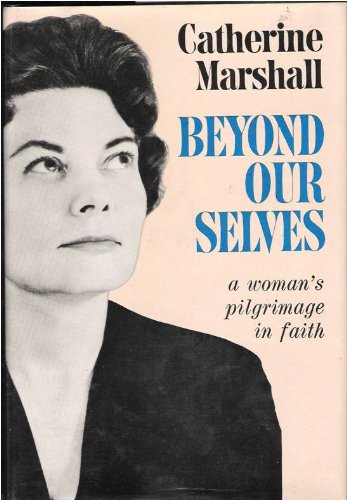 [One of Catherine's many books]

In 1936 Catherine Wood married pastor Peter Marshall. She was fresh out of college; he was  on his way to becoming one of the twentieth-century’s most popular ministers. Eleven years later, he would be chaplain of the United States Senate. His sermons were noted for poetic wording that made faith vivid in modern terms:

with songs and rejoicing...

At the peak of his success, Peter, who had always overworked himself, died of a massive heart-attack. He left a life insurance policy that would enable Catherine and their son, “wee Peter,” to scrimp by for a few years if she cut expenses to the bone. However, she felt the Lord could—and would—do more than let her scrimp by. She had always wanted to be a writer, trying her hand at various formats, and keeping notebooks of ideas. She believed that if God put an unquenchable desire in a person, he would help fulfill it. She had prayed years earlier that if her desire to write was of God he would bring it to fruition.

Now she found opportunity to begin fulfilling her dream. Friends and publishers asked her to assemble a collection of Peter’s sermons. Help for the task came from many directions. She learned all she could about paper quality, book sizes, and print formats. She wrote an introduction, summarizing Peter’s life and character. Certain that it was good, she offered it to Revell, the publishers who were printing the book of sermons. They accepted it hesitantly, but were immediately impressed with its high quality. Her career as a writer had gotten its start.

From her experiences as a widow and the struggle to handle court work and legal fees because her husband had left no will, she would write, “From that travail I had been left with a crucible of conviction that, since Christ is beside us, the worst that can happen to anyone of us in this life need not overwhelm us.”

Catherine became one of the twentieth-century’s best-known Christian authors. Her successful books began with Mr. Jones, Meet the Master—her collection of Peter’s sermons and prayers—and continued with A Man Called Peter, a biography of her late husband. This best-seller was made into a movie.

After the success of the biography, she turned her hand to Christian inspirational writing, to editing, and to novels. Her novel Christynot only was a best-seller, but became the basis for a television series. Her inspirational writings included To Live Again, which dealt with her experiences as a widow and consequent faith-struggles.

She joined the staff of Guidepostsand married Leonard LeSourd, its executive director. Together with John and Elizabeth Sherill they would form the publishing company Chosen Books, to publish their own writings and the inspirational writings of others. The LeSourds also founded a ministry through which people could express their prayer needs which then were assigned to intercessors.

On this day 18 March 1983, Catherine Marshall died of heart failure at Bethesda Memorial Hospital in Boynton Beach, Florida. She was sixty-eight.

Her writing ministry continued after her death through a final novel, Julie, published posthumously, and the inspirational Light in My Darkest Night, compiled by her second husband Leonard, in which he interwove his insights with Catherine’s descriptions of her spiritual struggles, and some reflections by other family members. Her books sold millions of copies and transformed many lives.