It Happened on DECEMBER 13 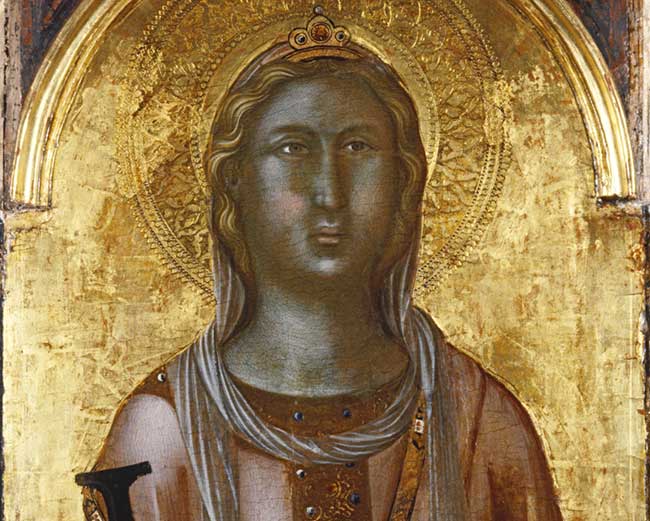 Less than a century after her death, a young virgin named Lucy became a popular saint in the early church. Churches were named for her. Her tale inspired a following far to the north of the scene of her martyrdom.

An inscription from around AD 400 identifies Lucy as a native of Syracuse in Sicily. That detail of her story, at least, is probably true. Apart from the bare fact of her execution, the rest may be little more than legend.

According to tradition, she carried food to Christians who were in hiding, wearing a light on her head to free her hands for the baskets. She determined to dedicate her virginity to God and, when she was about twenty years old, convinced her mother to seek healing at a Christian shrine. Healed, her mother became a Christian and Lucy seized the opportunity to ask permission to distribute a large proportion of her riches among the poor. (Her father had died fifteen years earlier.) However, a man whose proposal of marriage she had rejected denounced her as a Christian to Roman authorities.

At that time the cruel Diocletian persecutions were in full swing. Ascertaining that Lucy was indeed a Christian, the governor ordered her to burn incense to pagan gods. When she refused, he condemned her to a life of prostitution. Owing to her resistance and prayers, the Romans did not succeed in carrying out this evil design and instead executed her by the sword. Some traditions assert her eyes were torn out first.

The date of Lucy’s death was probably this day, December 13, 304. At any rate, her name soon appeared in martyr lists and her feast was observed on December 13th in both the eastern and western churches.

For some reason, Scandinavian countries took strongly to her tale and observed special celebrations in her memory. In fact, her feast kicks off Sweden’s Christmas season. There, the eldest daughters in families dress in white robes and wear evergreen wreaths festooned with candles.

Lucy's story is also told in Christian History #103 Christmas, the wonder of the season p.7