It Happened on OCTOBER 7 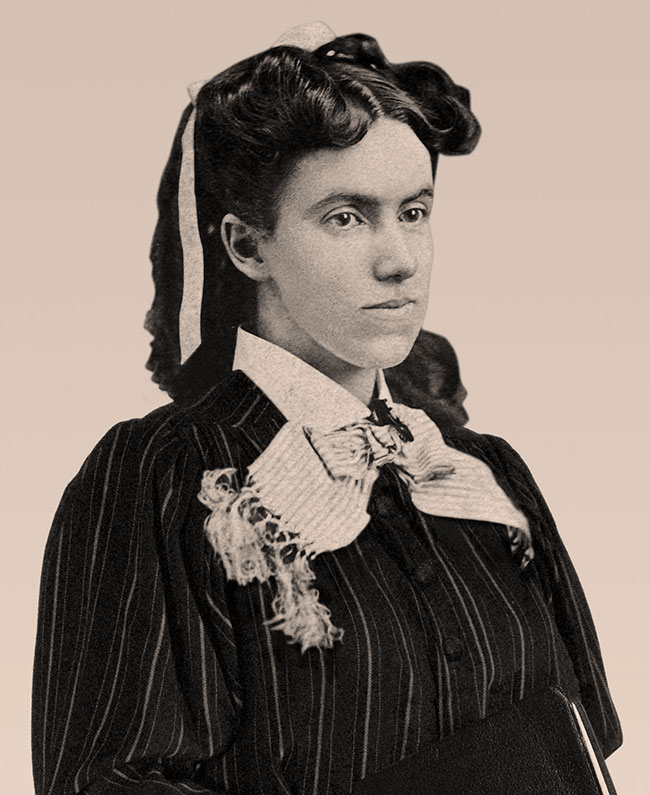 Lottie Moon sailed for China in 1873, on the steamer Costa Rica, to undertake mission work. She suffered seasickness most of the trip. The ship berthed in Japan twenty-five days later. On the next leg of the journey to Shanghai, it encountered a hurricane that ripped up decking, tore off the rudder, and drove several passengers to drink, expecting death. Lottie also prepared for death, saying calmly, “I should scarcely be surprised to see a divine form walking upon the mad waste of howling water, saying ‘It is I, be not afraid.’”

However, the storm receded, and the Costa Rica limped back to the port it had just left. But on this day, 7 October 1873, Moon finally set foot in China. Although Shanghai was not her designated place of work, just getting there was a moment of triumph. No sooner had she put to sea again for the final leg to her destination when a typhoon struck. The ship weathered the storm and berthed at Tengchow (Dengzhou) where she would serve for close to forty years with only three short visits back to the United States.

Moon’s sister Edmonia had preceded her but suffered from homesickness and culture shock and soon had to leave. Moon escorted her home. Made of sterner stuff, she returned to labor in China under wearying conditions and loneliness. One of the things that made her most indignant was that, with her great gifts and hunger to win souls, she was assigned to teach a few lackluster pupils:

Can we wonder at the mortal weariness and disgust, the sense of wasted powers and the conviction that her life is a failure, that comes over a woman when, instead of the ever-broadening activities that she had planned, she finds herself tied down to the petty work of teaching a few girls?

However, she was not easily suppressed. Increasingly the other Baptist missionaries turned to her to write reports and appeals to the far-off American board. She also excelled as a diplomat, reconciling squabbling Chinese students, negotiating between quarreling missionaries, and mediating clashes between missionaries and Chinese leaders. She learned to influence Chinese men without making them lose face, instructing them under the guise of informal conversation. She staked out a feminist position, insisting that “single women have the right to their own homes, own work, and equal voice in deciding mission business.”

Working in China was not easy for her. Evangelistic tours often forced her to rest in filth without privacy. “Have you ever felt the torture of human eyes beaming upon you, scanning every feature, every look, every gesture? I felt it keenly.” Chinese food made her ill, but she would rather eat it than embarrass a hostess. She could be tart when the occasion demanded it, though. Once a woman called her a foreign devil. “If I am a devil, what are you? We are all descended from the same first great ancestor.” The woman apologized.

As time went on, Moon attempted to change mission policy. She requested that missionaries be granted regular furloughs so they would not burn out. She scolded America’s million-strong Southern Baptists for sending only four workers to minister to thirty million people.

At one point, three of those four missionaries were absent and Moon worked alone. “I am bored to death with living alone. I don’t find my own society either agreeable or edifying,” she wrote. Little wonder she dreamed of love. When asked if she had ever been in love, she replied, “Yes, but God had first claim on my life, and since the two conflicted, there could be no question about the result.”

Early in the twentieth century, China experienced famine. Moon shared her little food with starving Chinese. Her own body wasted away. A missionary nurse got her onto a boat to take her back to America, but seventy-two-year-old Moon was too weak even to complete the first leg of the journey to Japan. She died in Kobe harbor. Like Hudson Taylor before her, she had wished for a thousand lives to give to China. Like him, she laid down the one she had to shine the gospel upon perishing souls. Her influence inaugurated a long-time successful fundraiser known as The Lottie Moon Christmas Offering that financed many missionary projects.