It Happened on OCTOBER 6 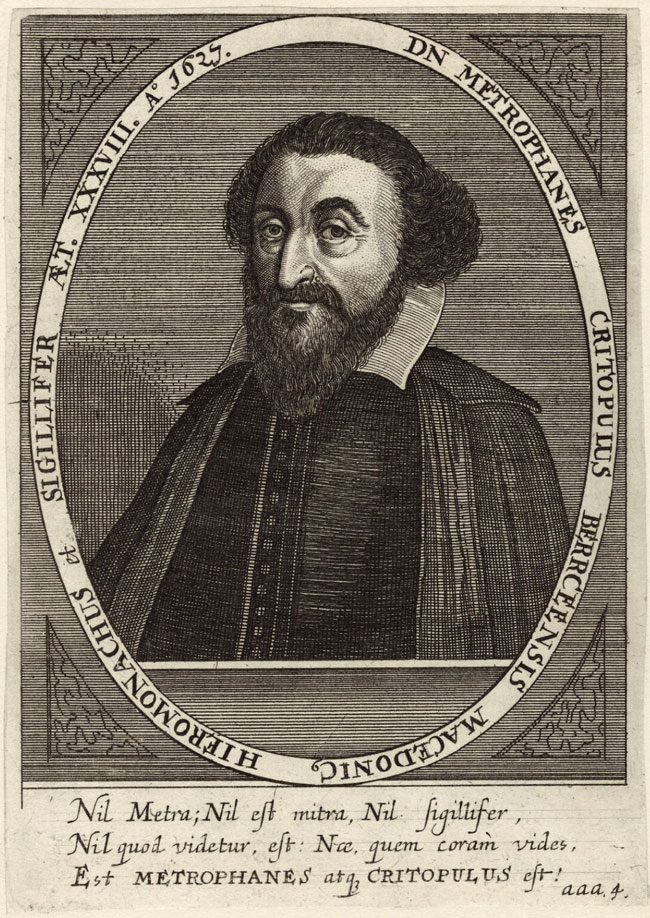 Early in the seventeenth century, Orthodox churchmen throughout the Ottoman Empire suffered from a lack of education. Cyril Lukaris, Patriarch of Constantinople, regretted this ignorance: “With this I reproach my countrymen, but without avail. And the Jesuits, taking the opportunity, have laid the foundation of a plan for educating boys at Constantinople, and have as undisputed success as foxes among poultry.” In his youth, Lukaris had suffered at the hands of Jesuits in Poland and had no use for them.

Hoping to provide education for potential church leaders, he opened communication with Protestants. In 1617 he sent one student westward—to England. That student was Metrophanes Kritopoulos. Archbishop Abbot placed him in the University of Oxford.

Kritopoulos was born in Berea in 1589 (the same Berea that embraced the teaching of the Apostle Paul in Acts 17). Greece was under control of the Ottoman Empire which plundered and harassed Christians. Later Kritopoulos would write, “Yet in spite of all that we suffer, the Church of Christ remains steadfast in the faith. She stands firm [on] the solid rock, which is Jesus Christ Our Lord.” At twelve he became a Scripture reader. At seventeen he entered the monastic community of Mount Athos. On a visit to Alexandria, Egypt, he came to the attention of Lukaris. Kritopoulos accompanied Lukaris on church business throughout Eastern Europe. He was twenty-eight when he sailed for England.

After completing five years of education, Kritopoulos returned to London. Bishop Abbot wanted to send him straight back to Constantinople but Lukaris had asked him to report on Reformed nations. Kritopoulos could not carry out his instruction for two years because letters miscarried and the Muslims, instigated by Jesuits, exiled Lukaris for several months. Not until 1624 was he able to continue his travels. He passed through Germany in the midst of the Thirty Years War. German universities welcomed him, eager to learn about Eastern Orthodoxy.

At the University of Helmstadt, Kritopoulos wrote a famous statement of Orthodox faith. He reiterated his church’s displeasure with Rome’s unilateral alteration of the creed. And he rejected the Calvinist teaching that God chose some people to save and others to damn.

Kritopoulos defended veneration of icons and relics, prayers for the dead, prayers to the saints, and monasticism. The reformers had repudiated all these. After more visits with Lutherans, he traveled to Reformed centers in Switzerland. On this day, 6 October 1627, he sat with Reformed leaders in Berne to discuss doctrine and proposals for Christian union. Berne’s theologians assured him that if Patriarch Lukaris could propose a viable path for unity, they would open their arms to it.

Kritopoulos left the Alps for Venice, where he awaited delivery of books promised him. Although Lukaris ordered him home, Kritopoulos remained with the Greeks in the Italian city. The Venetian senate contracted him to teach for three years.

Finally, Kritopoulos left Venice to visit Lukaris in Constantinople before returning to Alexandria. Gerasimos, Patriarch of Alexandria, advanced him. When Gerasimos died in 1636, Kritopoulos succeeded him. The Turks deposed and murdered Lukaris in 1638. Shortly afterward, Orthodox bishops anathematized Lukaris, who had embraced Calvinist teachings. They also anathematized doctrines of Luther and Calvin that they considered heretical.

With reluctance, Kritopoulos, who was visiting Constantinople, signed the anathemas. Health failing, he left for Wallachia (a region north of Constantinople). He outlasted his mentor not even a year, dying in May 1639. He was just fifty years old. He had hoped to make incremental advances toward unity with Protestant churches by establishing lines of agreement. The anathemas made this impossible.